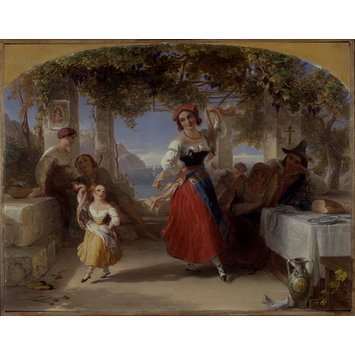 An Italian Mother Teaching her Child the Tarantella

The tarantella is a folk dance, characterised by light, quick hops and turns. Uwins lived in Italy from 1824 to 1831 and specialised in peasant scenes. The model for the child was his niece. The Gulf of Salerno is in the background. One critic found the painting 'highly successful in character', but another criticised its stale subject matter.

Oil on panel depicting a mother teaching her daughter a dance on a stone terrace under a vine arbor. There is a view out to sea in the distance and other figures seated around the scene watching, talking and relaxing.

An Italian Mother Teaching her Child the Tarantella
FA213 NegJ839
Panel, the painted surface has rounded top corners, 43.5 X 55.9 cm (17? X 22 ins)
Signed and dated 'Thos, Uwins, R.A./1842' on the back, and inscribed as below
Sheepshanks Gift 1857
Presumably the work exhibited at the RA in 1842 with the title 'The Lesson' with a description of the subject appended to that title in the catalogue:
'The cottage stood on the brow of a rock that overhung the Gulf of Salerno. The family of the vine-dresser were out on the loggia. It was a festa day. They had attended divine service at the convent chapel: had returned to their frugal dinner, and in the fulness of cheerful enjoyment the mother was teaching her child the steps of the tarantella, while the grandmother touched the tambourine, and the father looked on delighted. In a corner, a shepherd was telling his tale to a young girl, who was perhaps a relation or servant of the family'
This detailed description, which would have been provided by the artist, suggests that he might have witnessed the scene depicted.
The Art Union critic commented in 1842 that the work was 'One of the beautiful Italian subjects whence Mr Uwins has raised for himself an enduring fame ... highly successful in character and expression; it manifests a fine feeling for nature - happy nature, in its rich and full and pure enjoyment; and is remarkable for excellent qualities as a production of Art ... '. The Athenaeum criticised the Italian subject:
The group is pretty: a Tarantella, with its bystanders. The subject, however, is now hackneyed. Seducing as are Italian costume and countenance, we cannot but ask our artists whether they have not been sufficiently painted. Who knows anything of the figures and groups, and various dresses which animate our Welsh market-places? in all of which the poetry of a most poetical peasantry finds more or less evidently an expression?
Uwins exhibited a very similar subject at the RA the following year, with the title 'A Festa Day' (subtitled 'one of the earliest lessons a Neapolitan child is taught by its mother is how to dance the Tarantella') exhibited at the RA the following year. This was also described in the Art Union:
A family of some half-dozen Neapolitan peasants are keeping the festa under the grateful shade of a vine arbour, which is open to the seabreeze. The principal actors are a mother and her child, the former teaching the latter to dance the universal tarantella, while the father, grandmother, and others applaud the talent of the infant votaress of Terpsichore. This picture is throughout painted with the utmost purity; it is beautiful in conception, and admirable in execution.
The present work is inscribed on the back 'A Neapolitan family on the afternoon of Sunday/or any other Festa day./The mother is teaching her child to dance/the Tarantella', Uwins lived in Italy between 1824 and 1831 and his first exhibited Italian subject (at the RA in 1830) was 'Neapolitans Dancing the Tarantella'. 'Giving a Lesson' was the subject set for the members of the Sketching Society at their meeting of 2 April 1831, and Uwins's drawing is reproduced in Hogarth's Works of the Sketching Society (1858). It was certainly a favourite subject of Uwins; according to his wife's Memoir (I, p103), 'the sunshine of the heart was as diligently the object of study with Mr Uwins as the sunshine of nature, and in his search after this, the children, who everywhere loved to be about him, became his best models'. When elected RA in 1838, Uwins wrote that 'the public have chalked out a course for me; because I have done some Italian subjects successfully, no one will have anything else from my hand, and they who please to live must live to please'. There are several recorded versions or copies of the present work. 'The Tarantella' was in the William Llewellyn sale at Foster's 4 April 1855 (76, 30.5 X 38.1 cm (12 X 15 ins), sold £23 2s), 'A Neapolitan Peasant Teaching Her Child to Dance the Tarantella' was in the Samuel Cartwright sale at Christie's 25 February 1865 (58), bought Samuel Wheeler £168 0s, and in the Samuel Wheeler sale at Christie's 29 July 1871 (40, as 'painted for the late S Cartwright Esq. Exhibited at the British Institution 1865'), bought Cubitt £126 0s. 'A Neapolitan Boy and Girl Dancing the Tarantella' was sold at Sotheby's 19 February 1958 (83, signed and dated 1846, stated to have been exhibited RA 1846). A replica with slight variations was recorded in a private collection in 1978 (the owner's grandfather acquired it from the Gibbons collection, although it does not appear in either of the John Gibbons sales at Christie's 26 May 1894 and 29 November 1912); the owner informed the museum that another replica had been shown on BBC Television's quiz show 'Ask the Family'.
According to information supplied by her daughter in 1929, the model for the dancing child was Dorothea Stanley, the artist's niece.
EXH: RA 1842 (123, as 'The Lesson'), or possibly RA 1843 (168, as 'A Festa Day'); Exhibition of Fine Arts Royal Dublin Society 1861 (14B)
LIT: Athenaeum 14 May 1842, p433; Art Union 1842, pp121-2, 1843, p165; G Waagen Treasures of Art in Great Britain 1854 II, p304 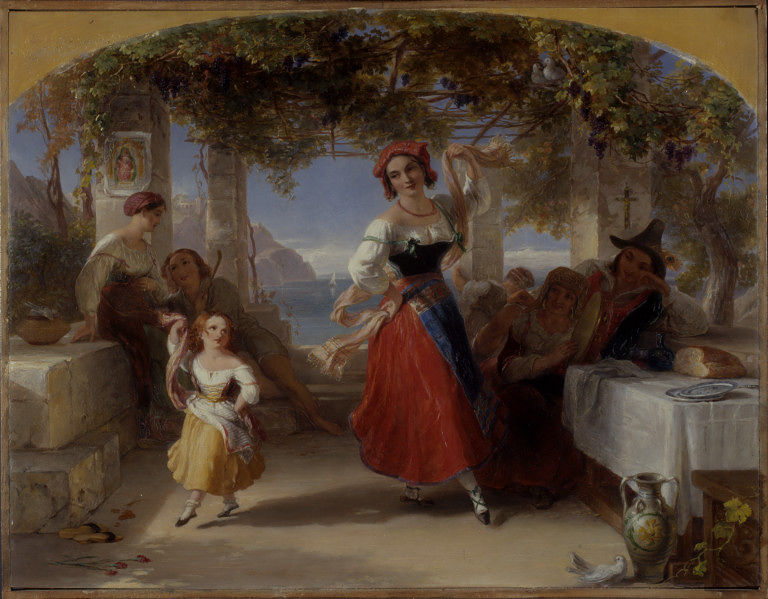