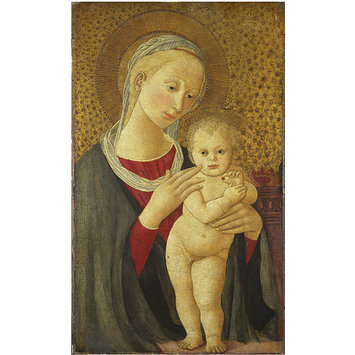 Pesellino (Francesco di Giovanni, ca. 1422-1457) son of the painter Stefano di Francesco was the grandson of the more famous Florentine painter Pesello who trained him. By the early 1440's he joined Fra Filippo Lippi's workshop and in 1453 he went into partnership with Piero di Lorenzo Prates and Zanobi di Migliore. His reputation grew in the mid-15th century and brought him the commissions of large-scale painting.
Fra Filippo Lippi (ca.1406-1469) was a friar at the Carmelite monastery of S Maria del Carmine in Florence and one of the leading painters in Renaissance Florence in the generation following Masaccio. Vasari, who is almost the only source for Lippi's early career, stated that his style was formed on Masaccio's Brancacci Chapel frescoes in S Maria del Carmine. Botticelli was his pupil.

This painting is a 15th-century copy of a composition attributed to Pesellino, who produced together with the painter Fra Filippo Lippi popular Virgin and Child compositions, most likely intended for the private market as devotional images. In this painting, the Child and the Virgin are associated with the pomegranate, a symbol for the forthcoming resurrection of Christ.

On a golden punched background, the Virgin is sustaining the Child standing on a parapet in front of her; he is holding a seed from a pomegranate represented on the top of a pedestal behind him on the right.

Acquired by c. A. Ionides before November 1881, as a painting by Fiorentino; in 1881 Ionides estimated its value at £150 (his inventory, private collection). Bequeathed by Constantine Alexander Ionides, 1900

Historical significance: This painting is one of the many compositions based of the same design deriving from a Madonna and Child attributed to Pesellino (Francesco di Giovanni, ca.1422-1457) formerly in the Aynard collection, Lyon (present whereabouts unknown). Megan Holmes (2004) identified 24 instances showing the exact same composition of the present Virgin and Child's composition, replicated with the aid of cartoons - a pin-prinked drawing used like stencil to replicate designs - and then adapted on different backgrounds designed to accommodate different budgets and tastes. Although the so-called Aynard Madonna is set against a shell-shaped marble niche, other compositions such as the Virgin and Child in The National Gallery of Art, Washington, is displayed against an elaborate rose hedge while the V&A picture and a tondo in the National Gallery, London, the latter including additional figures of the young St John the Baptist and an angel, are set against a tooled gold background.
They V&A Virgin and Child's format appears however slightly different as the Madonna's cloak runs right along the edge while the other paintings are well centred in the middle of the composition. This difference could result from a later reduction of the painting which edges may have been cut off. These compositions, including the V&A one, were most likely acquired as devotional images intended for domestic use and probably represented a middle price range, which accommodated both a taste for the tangible manifestations of the artist's skills and the preference for the conspicuous display of expensive materials.
The Aynard picture is attributed to Pesellino (Berenson) while the Washington picture is given to a follower of Fra Filippo Lippi and Pesellino. Compare to these two pictures, the V&A Virgin's type is absolutely identical with some differences in her garments, although much simpler as well as in the National Gallery picture. The depiction of the halo is bi-dimensional in the V&A picture whereas three-dimensional in the other three. The almost stylised features of the Child and the Virgin's faces indicate they were executed later enough to lose the support of the original painting that would have given indications for the modelling of the flesh.
The present picture was formerly attributed by Kauffmann to the Pseudo-Pier Francesco Fiorentino, a name given by Berenson (1932) to an unknown artist or group of artists whose works are well-crafted imitations of paintings by Pesellino and Filippo Lippi. Federico Zeri more accurately labelled these artists as 'Lippi and Pesellino Imitators', which is the attribution here retained.
The Child's face is indeed very close to Fra Filippo Lippi's facial type in such picture as Madonna and Child in the Denver Art Museum, Denver while the Virgin's face relates to both Filippo Lippi (ca.1406-1469) and Pesellino (Francesco di Giovanni, ca. 1422-1457) (see Madonna and Child, Kereszteny Museum, Ezstergom). Lippi also did many similar compositions representing half-length Virgin and the Child standing in front of her on a parapet (see Madonna and Child, Walters Art Gallery, Baltimore, no. 37.429 and Madonna and Child Museo di Palazzo Medici, Florence). The Child in the National Gallery picture also hold a pomegranate seed.
The pomegranate originally relates to the myth of Proserpine rapt by Hades, God of the Inferno, and was consequently construed in a Christian context as a symbol of resurrection, especially when hold by the Child. Here he is clutching a pomegranate's seed announcing his forthcoming resurrection while the entire fruit lays wide open on a pedestal behind him. Because of the many seeds it encloses, the pomegranate fruit was also a symbol for multiplicity and fertility as well as an allegory of the unity of the Church able to bring many different peoples together.
These replicated designs followed the same scheme as Filippo Lippi's Medici Palace chapel Madonna and Child copies which present variants set against an elaborate roses hedge (Museo Bardini, Florence) or with a tooled gold background (Yale University Art gallery, New Haven. Dated between 1550 and 1580, these paintings all displayed similar halos adorned with gilded rays and black dots on the edges. 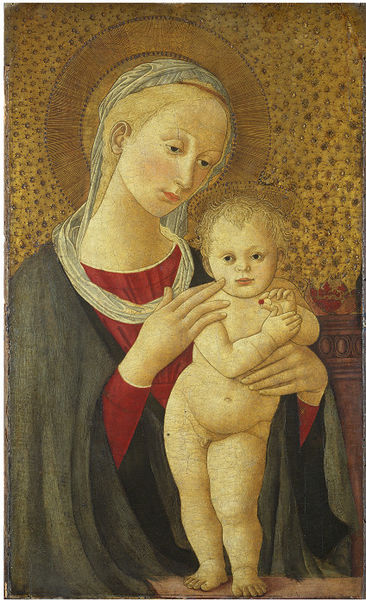