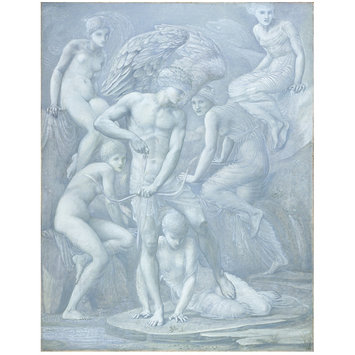 Burne-Jones studied with Dante Gabriel Rossetti, one of the founders of the Pre-Raphaelite movement. He was also a close friend of the designer and theorist William Morris. This painting shows Cupid shooting arrows at his victims.

Standing in the centre of the composition is Cupid, adult and almost nude. Blindfolded, he is fitting an arrow to his bow. He is surrouunded by five maidens, partially clothed in transparent drapery.

'E B-J'
Signed by the artist

Purchased from the artist by Constantine Alexander Ionides on April 20, 1884, for £250. Subsequently bequeathed to the V&A in 1900.

Edward Burne-Jones (1833-1898) was the leading figure in the second phase of the Pre-Raphaelite movement. His paintings of subjects from medieval legend and Classical mythology and his designs for stained glass, tapestry and many other media played an important part in the Aesthetic Movement and the history of international Symbolism.

Cupid’s Hunting Fields depicts Cupid firing arrows at his victims, a subject that Burne-Jones illustrated many times during his artistic career. Burne-Jones incorporated Cupid pulling back a bow string fitted with an arrow into various renditions of The Passing of Venus such as The Passing of Venus: Painted Fan (ca.1880; private collection) and The Passing of Venus: Design for a Tapestry (1898; Metropolitan Museum of Art, New York), painted almost twenty years later. The subject may also be seen forming part of the background of Laus Veneris (1873-8; Laing Art Gallery, Newcastle upon Tyne), although in this painting Cupid is a winged putto rather than a young male nude. In Cupid’s Hunting Fields Burne-Jones dispenses with the chariot bearing Venus and installs Cupid as the main subject in this pared-down composition. Although drawings of the main figure of Cupid for this composition date back as early as 1861 (Art Institute sketchbook, Ida E. S. Noyes Fund 1920.1138) this monochrome painting in the V&A’s collection, dated 1880, is the earliest fully executed version and the first of several re-interpretations of this composition. The painting depicts Cupid, blindfolded and semi nude surrounded by scantily clad female potential victims, whose wary expressions and hunched postures indicate fear, an emotion supported by the fact that they appear to be attempting to flee before his drawn bow. One figure lies at his feet, her downward gaze and his foot upon her leg suggesting that she has been dominated and has succumbed to Love’s power. The bodies of the other figures shy away from Cupid, which suggests their desire to escape the path of his arrows, yet all their faces remain turned towards him, hinting at the futility of running from a blind and random archer, whilst also pairing fascination to their fear. Other versions of this composition include a panel painting (ca. 1882; Delaware Art Museum) and a watercolour (1885; Art Institute of Chicago, Robert Alexander Waller Memorial Collection, 1924.576).

Malcolm Bell, in his 1892 monograph on Burne-Jones, described this painting as a ‘charming fancy… in low tones of grey and green [in which] the God of Love, blindfolded and fitting an arrow to his bow, steps down among a bevy of damsels, nude and draped, by a riverside, one of whom lies crouched upon the ground beneath his very feet, while the others turn to escape.’

This painting was exhibited at the Grosvenor Gallery in 1882. 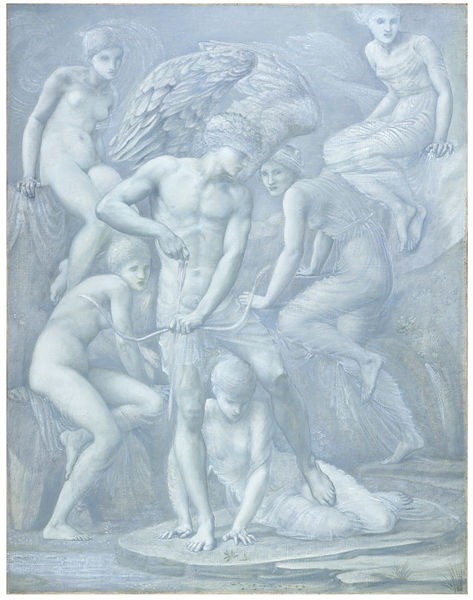