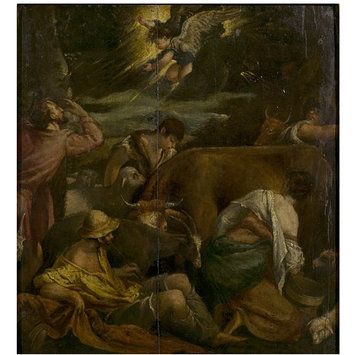 The Annunciation to the Shepherds

Jacopo del Ponte called Bassano (1510-1592) was born in Bassono near Venice and trained in his father's workshop before studying in Venice under Bonifazio de' Pitati (1487-1553). He then returned to Bassano to work in his father's workshop until his death in 1539. He later travelled often to Venice and maintained close friendship with the great masters of this time such as Jacopo Tintoretto (1519-1594), Annibale Carracci (1560-1609) and Paolo Veronese (1528-1588). Among his pupils were his sons Leandro, Francesco, Giambattista and Gerolamo.

This painting is a copy after a well-know composition by Jacopo Bassano, which was very popular since its execution around 1555-60. The artist, who was researching new iconographic solution, focuses here on the intense moment of the angelic announcement of Christ's birth, an episode from the New Testament intensified by the dramatic use of light and shadow and the inclusion of a naturalistic setting.

In a moonlit landscape, a family group assists to the apparition of an angel in a halo of light: a woman seen from the back is milking a cow while a shepherd on the left is resting with a pipe in his mouth; another shepherd stands behind him, his head turned towards the angel. Two boys with sheep and goats are behind the cow.

C.A. Ionides purchased the painting on 26/02/1883, for £10, in Venice (his inventory, private collection). Bequeathed by Constantine Alexander Ionides, 1900.

Ref: Basil S. Long, Catalogue of the Constantine Alexander Ionides collection.Vol. 1, Paintings in oil, tempera and water-colour, together with certain of the drawings, London : Printed under the authority of the Board of Education, 1925.
C. Monkhouse, 'The Constantine Ionides Collection' in Magazine of Art, vii, 1884, pp. 36-44, 208-214.

Constantine's plans concerning his collection conformed to a more 'public-welfare' vein of thought than his father or brother. He decided to donate his collection to the Victoria & Albert Museum, instead of privately distributing it or disposing of it in a Sales room.

Historical significance: This painting is a copy after Jacopo Bassano's Annunciation to the shepherds that witnesses Jacopo's research for new religious iconography. A popular composition that was much copied and of which several versions are known. The original composition is believed to be the version in the National Gallery of Art, Washington, but other versions, partially executed with the help of his assistants, can be found in the Galleria dell'Accademia di. S. Luca, Rome, in the Musée du Louvre, Paris, in the Musée des Beaux Arts, Chambéry, in Belvoir Castle, Leicestershire as well as in several private collections, while another copy is held by the Asmolean Museum, Oxford. A larger version with additional figures on the right hand-side is preserved in the Kunstsammlungen, Kassel.
The present painting is an exact copy of the Washington version and shows the announcement of Christ's birth by an angel (Luke, 2:9-11) appearing to a family group with animals in a moonlit landscape. A woman seen from the back is milking a cow while a shepherd on the left hand-side is resting with a pipe in his mouth; another shepherd stands behind him, his head turned towards the angel. Two boys with sheep and goats are behind the cow. A technical examination of the painting reveals that it may have been executed during the late 17th or early 18th centuries.
This painting is a good example of Bassano's mature period, around 1555-60 when his style recalls that of Tintoretto especially in the use of exaggerated figures, agitated drawing and strong shadows. The composition focuses on the different reactions of each family member before the angelic apparition in a dramatic atmosphere intensified by the chiaroscuro of the moonlight and the halo of light surrounding the angel. The whole painting assumes a naturalistic aspect, which is underlined by the presence of the animals and the involvement of the figures in a daily activity. This painting appears as one of his first explorations of landscape and pastoral, in which Jacopo's merging of the biblical narrative with a pastoral scene witnesses his research for new religious iconography.

Oil painting, 'The Annunciation to the Shepherds', after Jacopo Bassano, 17th or 18th century 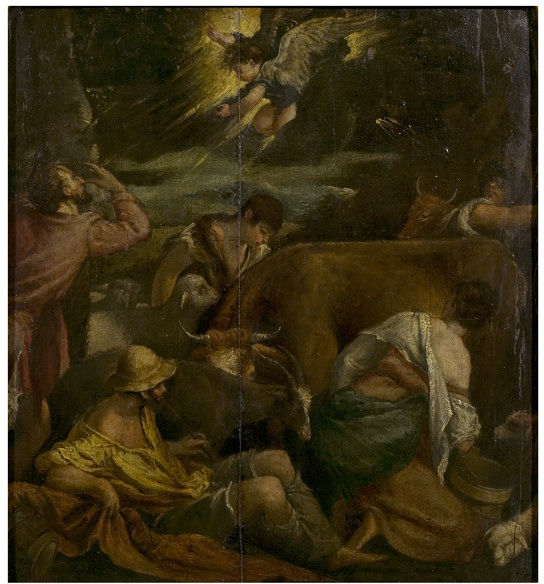