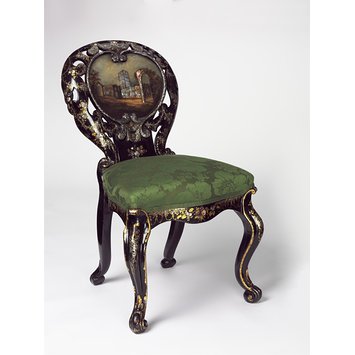 Papier mâché objects were very popular in the period from 1840 to 1860. During this period French eighteenth-century styles were very fashionable in Britain, and the cabriole legs and shaped back of this chair reflect this influence.

Often skilled artists were employed to decorate pieces such as this with a wide range of subjects, including landscapes, medieval buildings or naturalistic floral sprays. This is one of a set of chairs, each with a different building shown on its back. Papier mâché manufacturers used illustrations of historic buildings and ruins - based on the images found on souvenirs that were produced by enterprising publishers of guidebooks, prints, photographs and albums - to decorate products, such as the back of this chair. However this scene on this chair has not been identified.

Papier mâché chair with painted and pierced back

Given by Mr Marmaduke Langdale Horn
Museum no. W.3B-1929

The convex chair back was moulded papier mâché. To carve such a deep form would have been laborious and expensive. Theodore Jennens patented his process for steaming and pressing laminated papier mâché sheets in 1847. The technique was used for chair backs, trays and smaller decorative goods. [01/12/2012]

The legs and seat rails of the chair are constructed of wood. The back is comprised of two papier mâché sections. The larger section is a sheet of papier mâché that forms the whole back, and the smaller section is behind, to add strength to the back.

Small areas of damage to the edge of the back of the chair reveal that it was made of layers of paper sheets. The paper, made of rags, was supplied in sheets which were cut to shape and laid on a greased mould to be smoothed over with a hand tool to remove bubbles and impurities. Further sheets were added, pasted together and stove dried before a further process of oiling and stove drying to make the paper strong, hard and water resistant, a process that also changed the colour of the paper from grey to brown. The back and the smaller strengthening panel, which was probably made by a similar process, were then attached to the wooden legs and stretcher. X-rays reveal that the smaller section is attached to the back with tacks, and magnets indicate that the tacks were applied from the back, however it they do not reveal how the back panels were attached to the wooden frame. The front of the back panel also has raised areas, that have been pinned onto it: the scrolling elements that form the frame of the cartouche, and the two small bosses that form the centre of the scrolls that flank the base of the back.

Once the chair had been assembled the surface treatment could begin. The mother-of-pearl was filed down to thin flakes. A coat of size was applied to the blank article, and before it was dry the shell shapes were positioned. The article was then taken to the blacking room where it received several coats of black japan, each coat being thoroughly stove-dried before the next was added. Finally the surface of the article was rubbed with pumice until the black was removed from the mother of pearl and the surface was level. After more polishing, the painted decoration was added by hand, and the surface of the mother-of-pearl was coloured with transparent paints. A transparent varnish was then applied and a final polish given.

The construction of the seat upholstery is unusual. Although it looks as though there are layers of stuffing materials tacked to the frame of the chair under the modern cover, the original upholstered seat was in fact made separately and dropped inside the frame. The top cover was then tacked lightly onto the frame. This method prevented the vulnerable surface of the papier mâché being damaged by the upholsterer hammering in tacks to hold the various layers of stuffing materials. 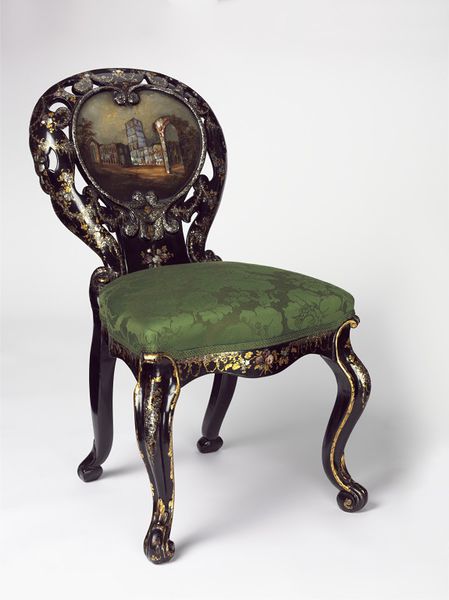