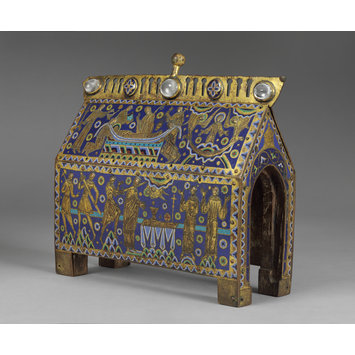 The murder of the Archbishop of Canterbury, Thomas Becket, in Canterbury Cathedral on 29 December, 1170 by four knights in the service of King Henry II, is one of the few episodes of British medieval history that is still widely familiar. It provoked outrage throughout Europe, and Becket's tomb became a place of pilgrimage within days of his death. He was canonised in 1173 and his shrine was one of the most famous in the Christian world, until its total destruction in 1538 on the orders of king Henry VIII.

Relics of Becket were much in demand and were often housed in elaborate caskets. Numbers of these survive today, scattered worldwide, most made of Limoges enamel, like this example. The V&A chasse is the most elaborate, the largest, and possibly the earliest in date. It is a magnificent example of Romanesque art, probably made for an important religious house.

The casket, or 'chasse', shows the murder of Becket, his burial, and the raising of his soul to heaven.The figures on the back may represent the Cardinal Virtues. The door panel at one end is now missing; it may have depicted St Peter. Scenes of Becket's martyrdom were made familiar in Canterbury by their depiction in the stained glass windows of the Trinity Chapel, near the shrine itself. The shrine was made in 1220, when Becket’s relics, newly enclosed in a shrine of gold and silver encrusted with gems, were placed behind the Archbishop's throne.

Reliquary Casket with scenes from the life of of St Thomas Becket.
Of rectangular architectural form crowned by a horizontal gilt copper crest perforated in four sections by alternating cabochon rock crystals and blue enamelled medallions, each section with three key hole form openings, the centre of the crest surmounted by a projecting orb. The body of the casket comprising the following; six enamelled gilt copper panels mounted on an oak core, each with a border of trefoil head motif in red, dark and light blue enamel. The rectangular front panel shows the standing figure of the Archbishop Thomas Becket in the act of picking up a chalice on an altar to his left, simultaneously a knight standing to his right wearing a short tunic viciously decapitates the Bishop with a long sword, two other knights stand behind him one drawing a sword, the other holding an axe. To the left of the altar stand two priests with their hands raised in horror, the background of dark blue enamel with circular decorations in red, green, light and dark blue and yellow enamels, all the figures with gilt-copper heads, struck in a mould and applied to the casket.

The rectangular front roof panel with the dead body of the Archbishop lying on a shroud supported at either end by two priests. Three more priests and a mitred Bishop stand around the body performing funeral rites, to their left a separate scene shows two angels holding the shroud escorting the soul of St Thomas ascending into heaven. The figures all have copper-gilt heads struck in a mould and applied to the casket, and the whole is decorated in the same manner as the preceding panel.

The left hand side gable shows the figure of Christ in Majesty enthroned on a rainbow beneath a trefoil arch surmounted by a turret, with an applied gilt-copper head, the blue enamel background embellished with multi-coloured stars.

The right hand side gable has an opening for a door is decorated with a round headed arch surmounted by a turret. The door, now missing, probably depicted St Peter.

The back bottom panel has an extensive diaper pattern in multicoloured enamel of quatrefoils and medallions with smaller quatrefoils between, both panels are flanked on either side by a saint standing beneath an arch holding a bound volume.

The back roof panel shows four long haired figures with haloes, possibly to be identified as saints, or the personification of the Cardinal Virtues of Prudence, Justice, Fortitude and Temperance.

St Thomas Becket and popular devotion.
This reliquary casket (or châsse) is the earliest surviving example in Limoges enamel showing the story of Thomas Becket's martyrdom, which took place in Canterbury Cathedral on the night of 29th December 1170.

The conflict between King Henry II and Archbishop Thomas Becket is one of the most famous stories in English history. Becket was cut down and murdered within the walls of his own cathedral by four knights known to be obeying the wishes of the king, who had become exasperated by his defiance. All of Christendom reacted with horror, pilgrims flocked to Canterbury to pray at the site of the murder, and within three years Becket had been canonised. His shrine became one of the focal points of European pilgrimage until its destruction under King Henry VIII in 1538, and relics connected with the saint were widely dispersed in the years immediately after his death. A good number of these were incorporated into specially made caskets by the enamel workshops of Limoges, and this example is the largest and most outstanding. The V&A houses a rich collection of Limoges enamels - other pieces may be seen in the Medieval Treasury beyond this case - but the addition of this superb casket provides the highlight.

The Casket's History.
The casket's recorded history suggests that it has been in this country since before the dissolution of the monasteries in 1536. It can be traced back to the early 18th century, when it was in the possession of the Wye and Pulleyn families of St Neots, near Peterborough, and it may originally have been made to contain relics of the saint known to have been taken to Peterborough Abbey by its Abbot, Benedict, in 1177. It subsequently passed into the collections of some of the most famous English antiquaries, including Sir John Cotton, William Stukeley, Gustavus Brander and Thomas Astle, before leaving the country after its sale in 1930. It then formed part of the Kofler-Truniger Collection before being purchased in 1979 by the British Rail Pension Fund, and was consigned to sale by auction in London on 4th July this year.

The Acquisition.
The National Heritage Memorial Fund and the V&A are acquiring the Becket Casket jointly. This is possible because Lord Thomson, who had successfully bid for it at auction, magnanimously stood down in favour of the nation. There have been generous financial contributions from the Po Shing Woo Foundation, the National Art Collections Fund, Mrs T. S. Eliot, the Headley Trust, the Friends of the V&A, the Charlotte Bonham-Carter Charitable Trust and from many members of the public and private trusts. The Museum still needs to raise a substantial sum to cover the cost of this purchase and all contributions will be gratefully received. [1997] 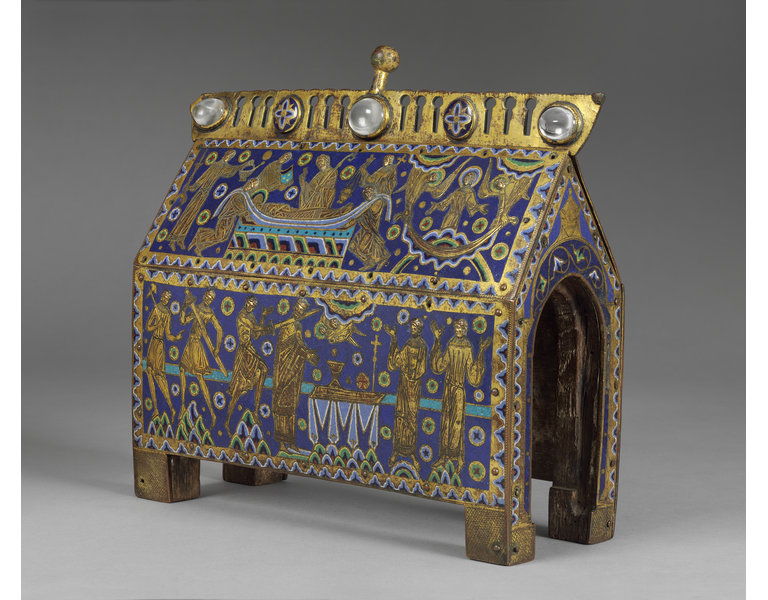