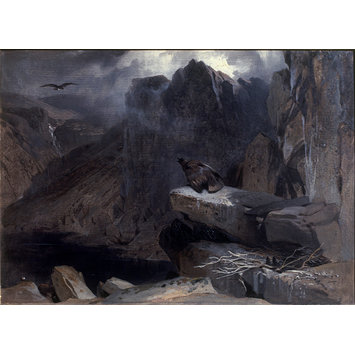 Landseer seems to have painted this picture in the Cairngorm Mountains in Scotland. In 1851 a critic wrote that 'the grand melancholy solitude of the Highlands is well expressed, though the tone of the colouring is too heavy'.

Oil on millboard entitled 'The Eagle's Nest', depicting a nocturnal scene with two eaglets in a nest on a rocky outcropping, guarded by one adult eagle, with another in mid-flight in the distance.

Landseer became the most famous painter of animals of the nineteenth century. As a precocious youth he had been heavily influenced by the realism of George Stubbs's animal painting, but he added an extra element of anthropomorphism; that is he often gave the creatures he depicted almost human expressions and situations. Landseer grew to love Scotland after his first trip there in 1824, when he visited Sir Walter Scott. He then frequently returned to the landscape of Scotland and the wild creatures he had seen there. This work is a fine example of Landseer depicting birds in a vast natural setting. The wild mountains and the bleak rocks, the few bare sticks of the great bird's nest, have a romantic melancholy which appealed to those who admired the poetry of nature in its untamed state. 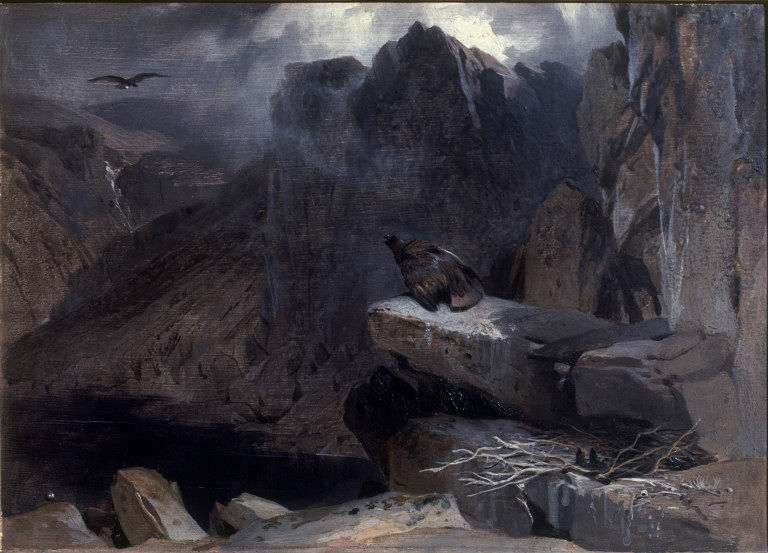