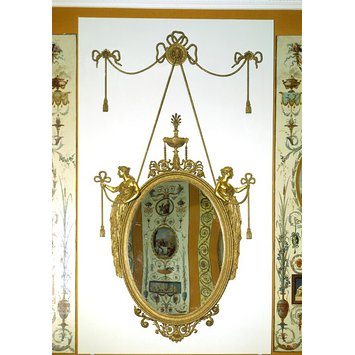 Design & Designing
Robert Adam (1728-1792) charged his patron for several designs for this pier glass (in 1769, 1770 and 1771). The resulting glass is larger and more daring than anything Adam had designed hitherto. The draped female terms which reach out to grasp the tasselled ropes give this design a dramatic character. George William, 6th Earl of Coventry (1722-1809), was Adam's earliest recorded English patron. Adam supplied designs for his country house, Croome Court, Worcestershire, from 1760 as well as the London house, and continued to work for him until 1781.

Materials & Making
The elements have been carved separately and then assembled. The crisp carving of the acanthus foliage and the closely-fluted drapery of the female figures is typical of the quality of Alken's work.

A carved giltwood mirror, the oval frame with a fluted inner border within a lotus leaf outer border, with scrolling anthemion and foliage below, a vase above supported on scrolling foliage with an anthemion mount and flanked by a pair of draped female figures holding ropes attached above to a medallion embellished with a lion's mask, the ropes extending beyond the figures and the medallion in decorative bows with suspended tassels. The female figures appear as if holding up the ropes from which the oval glass is suspended.

The mirror was supplied for the London house of George William, 6th Earl of Coventry (1722-1809) now no.106 Piccadilly. Lord Coventry succeeded his father in 1751 and enjoyed an income of £10,000 a year from the family estates in Worcestershire. Coventry was one of Adam's first patrons, he employed him extensively at his country seat, Croome Court. On the accession of George III, Lord Coventry was appointed Gentleman of the Bedchamber to the King and he set about acquiring and furnishing a suitable London house. Coventry House was close to the Court at Buckingham House and St James's Palace. It was built for Sir Hugh Hunlock in 1761, the identity of the original architect is not known. From 1765 onwards Robert Adam supplied designs for the decoration of the interiors which still survive in the Sir John Soane Museum, London. Much of the 18th century interior decoration survives in situ. Careful observation and analysis of the original bills suggests that the mirror was one of a pair which hung on the side walls of the Eating Room, the front ground floor room.
The house was used by the Coventry family until 1848 when it became a club. It is not known when the original furnishings left Coventry House, or how and when the mirror left this country. It is first recorded in the collection of Benjamin Sonnenberg in New York by which time the carved ropes had been cut down. It was sold by Sotheby Parke Bernet, New York 5-9 June 1979, Lot no. 1628 as 'a fine Georgian giltwood mirror in the manner of Robert Adam'. Ten years later it appeared at Doyle's Auction Room, New York on 25 October 1989 and was sold to a New York furniture dealer. It was identified and acquired by Alan Rubin of London's Pelham Galleries, who sold it to the museum.
The library bookcases (W.76-1975) and and the clothes press (W.20-1978) designed by Adam for the Earl of Coventry's country house, Croome Court, Worcestershire, are also in the collection of the Victoria and Albert Museum.

Historical significance: The design of this mirror represents Robert Adam's mature style of interior decoration and reflects both his formative years in Italy and the confidence which his patron Lord Coventry placed in him. The mirror incorporates Adam's characteristic motif of draped female figures. They flank the oval glass which they appear to hold up by clasping the ropes from which the glass is suspended. This conceit was probably inspired by Adam's knowledge of Italian Baroque art. The mirror is close to Robert Adam's designs for the giltwood girandoles supplied for the Long Gallery at Osterley Park House, Middlesex, in 1770.

When earlier this century, great London houses were abandoned in favour of the country house, the contents were often disbanded. The Coventry House mirror is thus a rare example of well-documented furniture commissioned for an aristocratic London House.

This monumental mirror was made for the 6th Earl of Coventry (1722-1809) for the Eating Room of Coventry House (now 106 Piccadilly).
Lord Coventry was one of Adam's earliest London patrons. The library bookcases and the clothes press designed by Adam for his country house Croome Court, Worcestershire, are shown in Gallery 125. The large scale of the female figures illustrate Adam's knowledge of Baroque design, acquired during his studies in Italy. Adam's design for the mirror survives in Sir John Soane's Museum, London. [1996]
British Galleries:
This pier glass was made to hang between two windows. Its oval shape and delicate ornament make it typical of Robert Adam's Neo-classical style. While the ornament at the top and bottom is taken from ancient sources, the figures shown holding up the glass are probably based on those in Italian Baroque art of the 17th century. [27/03/2003] 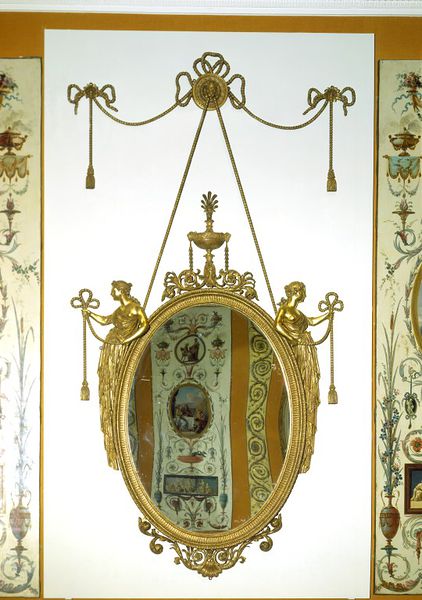