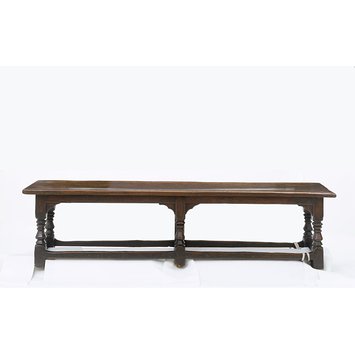 Object Type
This oak table would have been described as a 'joined table' as opposed to a trestle table. The legs were fixed to the top, rather than dismantled and removed when not in use. Such a table would usually have been placed on a dais at the end of the hall, for the master of the house and his more important guests. An alternative location was in the chamber, a highly important room where the master or mistress not only slept but also received guests for dinner.

Time
This table dates from about 1540 or earlier. The brackets and the octagonal balusters with their sharp edges are in the Gothic style, with no classical motifs.

Materials & Making
The table is made of oak and joined with pegs. The slats of wood are set at right angles to each other, which is a sign of early joinery; later examples usually had mitred (diagonally cut) joints.

Joined dining table of oak, rectangular in form. The top consists of a single long board (originally 22" wide, 2"thick) within a mitred frame of the same thickness; above each leg the top has been reduced in thickness to locate the top. Along the long sides the plain freize rail is supported by eight spandrel brackets of Gothic arched form (3/4" thick. At both ends below the rail is a full width spandrel with ogee arch and cut cross motif. The table has five double baluster legs (max. 5" square) which have been shaped octagonally, below triple collars with square posts above and below; and in the middle of the rear side is a plain octagonal post leg. The legs are united by seven plain stretchers.

Construction
The frame is joined and pegged. The top panel and frame appear originally to have been butt jointed and glued, but as cross grain shrinkage has occurred the top has been reconstructed, probably in the 20th century, using pegged tenons along both sides at 20" intervals, and 2-3" at the ends. The top panel underside has been adzed.

This is one of the earliest tables in the museum, but in construction and design they correspond to the types made during the 15th century and even earlier. This type of table was placed in the hall on the manor house, on a dias at the end for the master and the more important guests, and the others at right angles to it down the length of the hall.

Angela Comolli Sordelli, Il Mobile Antico dal XIV al XVII Secolo (Milan 1967); NAL 47.R.60
Murray Adams-Acton, Early English Oak tables, I - Observations on the Long Table, in Connoisseur, Dec 1936, fig. no. 2, p. 319
"Table..in the collection of Monsieur Louis Cartier....an exceedingly important specimen of an early English table belonging to the first half of the Sixteenth Century which provides an interesting link to the evolution of the pedestal table to the elongated table with bulbous legs. Possibly it is one of the earliest framed-up tables to have been made in that century. In design it is not wholly domestic, but reflects the ecclesiastical influence noticeable in most English woodwork prior to the Reformation; in fact, the early character of the legs, reminiscent as they are of timber buttresses which one sees on screens and pew ends, and the shaped ogee arcading below the frieze at either end, are at least mildly ecclesiastical, and it would not be rash to assume that this table was made by some artisan (possibly a lay-brother) connected with the production of church woodwork. In its construction some interesting points occur. The top is carried on plain timbers tenoned and pinned into the legs at each angle, as well as into the central leg, which on the wall side is straight. (In later tables the carved frieze cut on one rail passed ove the top of the central leg.) The top oversails the ends as in the case of the early side-tables of the same period, and in height the table exceeds by a few inches what was usual for similar tables later in the century of its birth. Throughout, the wood used is pit-sawn English oak, quartered and planed."

British Galleries:
This table may be slightly earlier in date than the room itself but the form of large tables remained fairly constant throughout the 17th century. [27/03/2003] 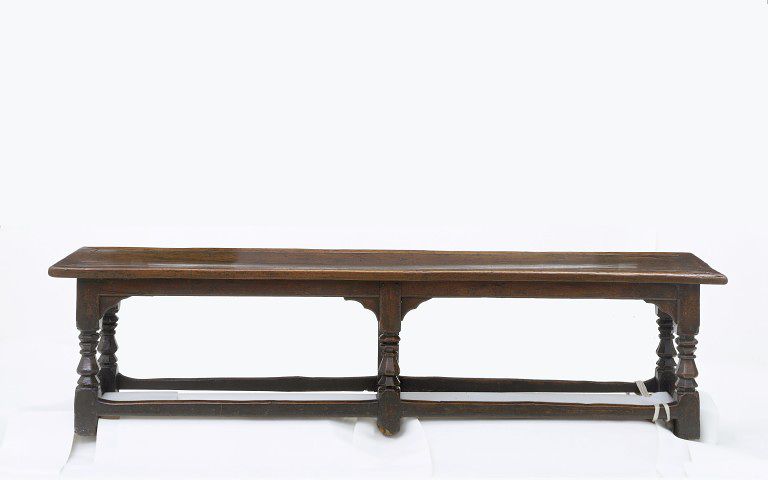