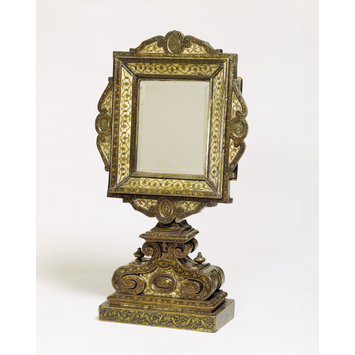 Mirrors were highly sought after luxury items throughout Europe in the 16th century, and Venice was an important centre of production. This example is decorated with Turkish-influenced decoration of inlaid mother-of-pearl, then widely used in Venice, a maritime power with extensive links with the Eastern Mediterranean. The particular style of this mirror can be dated to the 1590s: a spinet with similar decoration was made in Venice by Giovanni Cellestini and dated 1593. It is now in the collections of the Royal College of Music (London). This mirror once formed part of the collections of Edmond Bonnaffé (1825 - 1903), the eminent French collector, art historian and author of Dictionnaire des amateurs français au XVIIe siècle (Paris 1884).

Rectangular mirror frame with bracketed sides, crest and base, mounted on a scrolled pedestal, with a sliding panel (modern) that removes to reveal the reverse of the static mirror plate. Both frame and pedestal are painted and parcel gilt, with panels inlaid with mother-of-pearl.

The rectangular mirror frame with a projecting scrollwork pediment at the back edge on all four sides which contains two sunk compartments with a mother of pearl plaque in each, and a central oval compartment with gilt floral scrolls on a green ground. Between the top edge cyma reversa and sight edge cyma recta mouldings on each side is an inset plaque of mother of pearl; there is a concave fillet that conceals the mitres between these two mouldings.

The lower edge of the frame fitted with an angled dowel projecting from the scrollwork ornament, which sits vertically in a corresponding mortice in the stand, so that the mirror is angled backwards from vertical at a shallow angle.

The reverse of the mirror with a 3-sided mitred framework, grooved inside to receive an oak sliding panel (of recent construction). The glass plate (not apparently original), (14.5 x 18.5cm) is approximately 2mm thick, with irregular bevel, and 2 parallel scored lines within the level, and has been painted on the reverse, is held in place by pins with cork spacers.

The symmetrical stand with two voluted scrolls (each with a turned finial) with an oval boss between them, and a moulded capital and stepped, wedge-shaped base below an ovolo moulding, the sunk portions are decorated partly with mother of pearl plaques painted and gilt with scrollwork, and partly with gilt scrolls on a green ground.

The underside of the stand is plain and unpainted, with 4 green felt pads (probably 20th century), and several drilled holes, some staining and a pen inscription 319.

Condition
Missing sections of mother of pearl plaque on the front (left end) and right end between the plinth and ovolo moulding overhanging it.

Bought for £22 3s from Monsieur Fulgence, (50 rue St Lazare, Paris); purchased on the Museum's behalf at the auction of the Bonnaffé collection. Formerly part of the collection of Edmond Bonnaffé, eminent French art historian and collector (1825-1903) and bought in Paris at the sale of his collection, lot 319, held at the Hôtel Drouot, Paris. Described as 'Venetian mirror on a lacquered stand with an inner frame of mother-o' pearl.'

See museum papers on the Fulgence nominal file. 25 lots were purchased at the Bonnaffé sale 1/5/1897 at Rue Drouot, Paris, via M. Fulgence (a dealer, who bid on behalf of the Museum): museum nos. 489-1897 to 517-1897 inclusive. Museum staff visited Bonnaffé's house at Passy on 28/4/1897, before the private view of the sale, with B assisting and offering information on the history of each piece and repairs that had been carried out. 32 pieces were selected for biddign, the 'gem of the collection' being a 'very beautiful piece of French Renaissance furniture - No. 349 - a small credence or cupboard, which we have valued at 10,000 frances (£400)'. The Museum hoped that George Salting would continue the bidding if/when the bids exceeded the SKM limit, but in the event, neither the Museum nor Salting bought it.

Although widely published, this is an unusual survival and no other mirrors of similar form are known, though the type of decoration is found on many other luxury objects (see below). The heavy scrolling form of the base with a central oval plaque is not commonly found on furnishings but the cresting of the walnut choir stalls in the church of Santa Giustina, Padua by Maestro Rizzardo Taurino and associates (1556-1560) indicates the currency of the form. Elaborate frames to mirrors in various materials are however recorded: silver, gilded wood, pastiglia, ivory etc.

P.K.Thornton, The Italian Renaissance Interior 1400-1600 (London 1991), pp.234-9 on mirrors notes that mirrors in Italy would have been familiar to most people of any standing by 1400 and even earlier, though references to mirrors in Italian household inventories seems to be rare before about 1450. Until well into the 16th century steel mirrors were more common than silvered glass ones. Glass mirrors were being made in Germany in the 14th century, and in Murano during the 15th century, apparently as early as 1420. From 1507 Venetian mirror production developed into a dominant position. Pains were taken to preserve mirror plates from damage, with the use of curtains, shutters or special cases

Decoration
Fine lacquerwork was made in Persia during the 16th century. It was commonly decorated with moresques executed in gold: this was done on relatively small items, such as folding book-rests, book-covers, containers for writing materials, etc. Such objects excited the admiration of Europeans whenever they saw them, and early imitations of this work embodying moresque decoration were made in Venice. The technique was deemed suitable for embellishing the covers of highly important government documents, so apparently carried no light-hearted or frivolous connotation in the way that imitations of Chinese artefacts were often to do later. Venetian lacquer was also used for making small objects, such as jewel caskets covered with moresques, although entirely occidental figure-subjects occasionally occupy panels within the imitation Islamic ornament. Sometimes the ground of the panels in such work was made of mother-of-pearl which reflects light back through the painted deocration applied on to it. A similar effect was contrived with a gold ground over which painted decoration was applied; the colours were often applied so as to form ‘the ground’, leaving the pattern itself unpainted (reserved as it is called).. exemplified on the V&A ‘Queen Elizabeth virginals’ (about 1570) or a harp ordered for the private orchestra of Duke Alfonso d’Este (1581, Rome). Thornton pp.34-5

Huth says that from the 13th century Venice had been an entry point to Europe for goods (earthenware, metalwork, textiles, jewelry and lacquerware) from the Levant and Orient. A Venetian document of 1283 consists of rules for the depentores (those working with a brush, involved in the production of varnished caskets, tables and woodwork). The decoration of wares as opposed to simply protecting them with varnishes seems to have begun during the mid 16th century. A Syrian craft which may have inspired Venetian artisans working in lacquer was the practice of damascening metal, known in Milan and Venice as early as 1300. The Italian craftsmen (no oriental craftsmen resided in Venice) who practised this art were called azziministi. Another Oriental craft introduced to Venice from the late 15th century was the practise of fashioning elaborate bindings for books. Venetian copies or adaptations of lacquered bindings ‘in the Persian style’ date from the middle of the 16th century (eg Binding, Museo Correr 1570-77). European engravings based on Moresque designs, such as those by ‘the Master F’, were circulating in Italian workshops as early as 1520. Venetian shields of wood covered with parchment, painted with knotwork and scrolls, and with areas in white, red and green that shone through the varnish, giving the effect of lacquer survive in armeria of the Doge’s palace (Venice ) and from the household of the Bishop of Salzburg. Huth discusses other types of object (probably Venetian) with similar decoration, which may have been what was referred to by Italians variously as ‘frissi grottesche’, ‘alla zemina’ in the Persian manner, ‘petteniera turchesca’ in the Turkish manner: a quiver case, a folding table, small cases (casse da pettenti), caskets (scrigni or possibly what was known as ‘casse da conzar il cao’, boxes for dressing the hair), mirror frames and frames of architectural form with or without inset marble plaques, cuoridoro shields (described by Contadini in At Home in Renaissance Italy eds. Ajmar-Wollheim, and Dennis, pp.319-321), cabinets with leather coverings and musical instruments such as harpsichords and harps.

Monika Kopplin, European Lacquer (Munich, 2010), pp.23-34
Kopplin notes that Venice traded in shellac, mainly from north-east India, Indochina and Sumatra, and maintains that Islamic lacquered objects (made from as early as the 10th/11th centuries) were undoubtedly present in Venice by the 16th century. Recent studies of the techniques used found that Venetian 'lacquer' was generally made up of linseed oil and colophony derived from pine resin, a composition also mentioned in contemporary writings such as Leonardo Fioravanti (1517-1588) in his 'Compendio di secreti rationali' (Venice 1562). Turpentine of larch, also known as 'Venice turpentine' was also used, though not sandarac, the most important resin in Islamic lacquerwork but problematic on account of its limited availability and complex preparation. Arabesques were applied in powdered gold on the black-painted wood, and gold leaf employed for gilding larger decorative surfaces which were then given a luminous glow through a lustre finish in a variety of colours. Tempera was probably used as well as oils, and a final coat of glossy varnish applied. These studies suggest that the stylistic imitation of Islamic models was coupled with the use of largely identical techniques (p.24, citing Adriana Rizzo, 'Le "laque" vénitien: Une approche scientifique', in Venise et l'Orient 828-1797, exh. cat., Institut du monde arabe, Paris (2006), pp. 244-51)

Venetian toilet mirror, painted, gilt and inlaid with mother of pearl, about 1590

Translated from the Italian:
"The mirror in fig.1 is also decorated with Moresque motifs very similar to the ones we found on the little box especially for the frames painted in black and gold. On the other hand the mother-of-pearl inlay panels are painted with somewhat different polychrome patterns. A casket and a little box decorated in the same manner are shown in figs. 2 and 4. It is almost certain that these objects and many others linked to them that survive were made in imitation of damascened steel objects, in Milan, a city famous towards the end of the first half of the sixteenth century for the production of such items. In fact the Victoria and Albert museum owns a beautiful damascened steel mirror with gold and silver inlays (fig. 5) dateable to around 1550. As it has already been published by A. Gonzales-Palacios (note 1) I will limit myself to highlighting the similarities between the structure of this mirror and that on the lacquered object in fig.1. The black and golden elements correspond to those in steel on the damascened version; the polychrome mother-of-pearl decoration represents the gold encrusted silver."

During the 16th century furnishings associated with beauty became more complex, as shown by the ornate form and decoration of this casket and mirror. Caskets, used to keep jewellery, cosmetics and other precious items, are often depicted in scenes of Venus at her toilette. Mirrors grew in size and developed free-standing bases. The mirror of this one has been replaced, but would originally have a small sheet of glass backed with an amalgam of tin and mercury. [77 words] 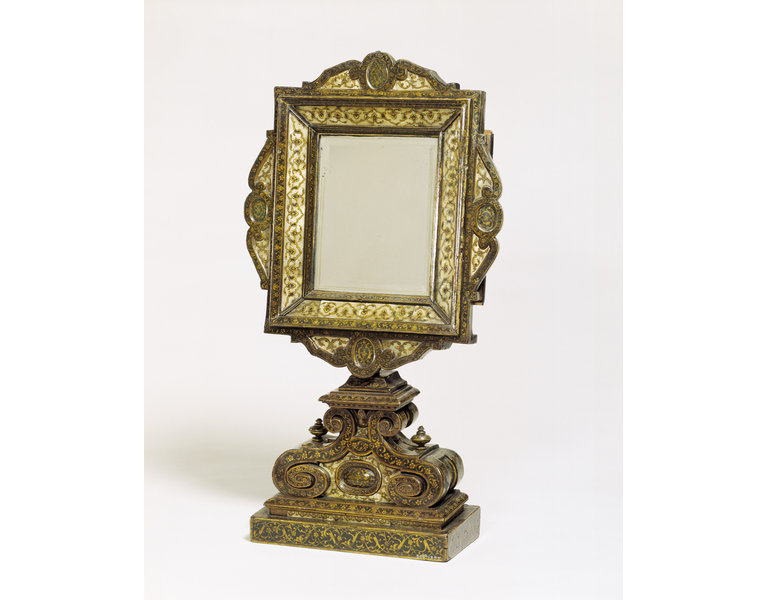