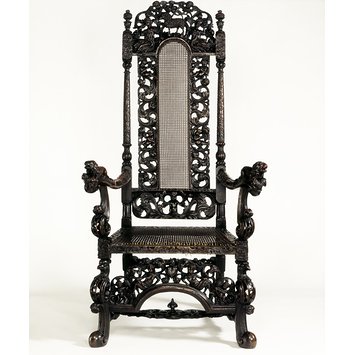 Chairs with caned backs and seats were made from the 1680s onwards. Caning was an innovation introduced to England from Asia. The diagonally set front legs and the arched shape to the front rail of this chair show that it was made between 1700 and 1720. We do not know the significance of the lamb and flag carved on the top cresting. The motif is often associated with the Knights Templar and may indicate that the chair was made for use by a religious organisation. In the 1830s the chair was owned by Mr Thomas Baylis who lived at Pryor’s Bank, close to Fulham church in London. He was an early collector of antique furniture, who published a catalogue of his collection.

Carved frame, with cane seat and back. Sloping back with cresting carved with crown and amorini above a lamb and flag; on either side a seated maiden playing pipes, all in a background of foliage. Splat with rectangular panel of canework; side pieces pierced-carved with foliage and reclining cupids. Carved and turned uprights with gadrooned vase-shaped finials. Arms partly carved with foliage and with a carved lion resting a paw on a lamb on each scrolled terminal; arms supported by pierced scrolled supports. Caned seat with foliage carved on rails. Front legs carved above with eagle heads; below pierced scrolls and scrolled feet; back feet raked outwards, turned with square sections. Arched front stretcher, with central flaming heart, on either side reclining women and blindfolded cupids firing arrows, all in foliated background. Turned back and side stretchers; side stretchers joined by pierced-caved stretcher of foliage surmounted with turned finial.

Carved walnut, with caned seat and back

The chair was given by a private donor, without any provenance, in 1955. At the time it was thought to be a late 17th century ceremonial chair, possibly from the Middle Temple, which has the badge a lamb and flag, (although the lamb invariably has a halo above its head). In 1974 Simon Jervis, of the Department of Furniture noticed a resemblance between the chair and a drawing of a chair at Pryor'sbank, Fulham, the house of the antiquary Thomas Baylis, (it was lot 496 in a sale catalogue of 1841, in the library). The house was furnished with antique furniture, but a few pieces assembled from old pieces of woodwork were supplied for the dining room by John Webb and it is now thought that he may well have supplied this piece too. Physical examination of the chair in 1993 suggested a 19th century date but this has recently been contested by Dr Adam Bowett, who suggests instead a date of 1700-1720

Historical significance: When this piece was acquired from a private donor, without provenance, it was thought to be a genuine late 17th century chair, probably ceremonial, possibly for the Middle Temple which had as its badge a lamb and flag (which appear in the cresting). In the early 1990s was later debated as to whether it might be more likely to be an antiquarian piece made up from old pieces of woodcarving during the 1830s but Dr Adam Bowett, in the course of major work on furniture makers of the period, suggested that it dated from 1700-1720

Carved walnut armchair, with caned seat and back, a lamb and flag represented in the cresting. English, probably made 1700-1720

Jervis, Simon. 'The Pryor's bank. Fulham. Residence of Thomas Baylis Esquire F.S.A. An iIllustration Of the preservation of Ancient Works By their application to Modern Purposes'. Furniture History. 1974. Vol.X. pp.87-98.
Naomi Yin Yin Szeto, The Extraordinary in the Ordinary. Chairs for Viewing the World Through Time. Hong Kong, 2014, p. 443. Catalogue of the exhibition held at the Hong Kong Heritage Museum, 2014, to which the chair was lent.

ARMCHAIR
Carved walnut with caned seat and back.
English; late 17th century
The Lamb and Flaming Heart on this chair indicate that it was probably made for someone connected with the Church or for use in a church. [pre-1993]
ARMCHAIR
ENGLISH; about 1690
Walnut

The Lamb and Flaming Heart on this chair indicate that it was probably made for someone connected with the Church or for use in a church.

Given by Mr. E. Bullivant and his family in memory of his wife. [pre October 2000]

There has been a great deal of debate about the date of this chair. It is known to have been in the collection of Thomas Baylis in the 1830s. Thomas Baylis was known to have commissioned modern pieces from the dealer John Webb. In 1993 Sarah Medlam, John Kitchin and Kate Hay inspected the chair and thought it likely that it dated largely from that time. However, in 2000, Adam Bowett was firmly of the opinion that it dated from 1700-1720. He cited the 'corner horsebone' legs and the arched front rail as evidence of this. He was not concerned about the lack of iconographic/design consistency between the front rail, top rail and the cross stretcher. 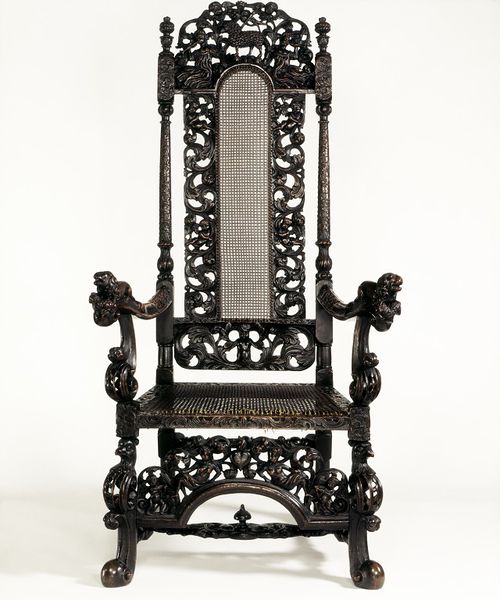