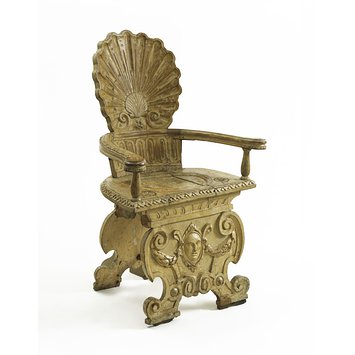 Object Type
The chair has a scallop-shell back based on the sgabello, an ornate form of hall chair widely used in Venice from about 1570.

Materials
The arms, balusters and front slat are made of beech, the back and seat of oak.

Places
Similar chairs are depicted in The South Front of Ham House, a painting of around 1675 by Henry Dankert, and in Daniel Mytens' portrait of around 1618 showing Alatheia, Countess of Arundel seated in the Picture Gallery at Arundel House, London. They are also recorded in the Gilt Chamber of Holland House, London.

People
The 18th-century diarist Horace Walpole believed that the chairs at Holland House were designed by Francis Cleyn, chief designer at the Mortlake tapestry works from 1626. Chairs like this would have been popular with the select group of courtiers known as the 'Whitehall Set'. They were close to Charles I and shared his taste for the latest fashions from Italy and France.

A chair of carved oak and beech. The arms, balusters and front slat are of beech and the seat and back are of oak. The back is in the form of a scallop shell. It has flat scroll-shaped arms of the 'caquetoire' type supported on turned baluster rests. Below arm level, the back is of rectangular fluted form. The seat is semi-circular, with a circular depression in the centre. There are two solid cartouche-shaped supports. The one at the front is carved with a mask, festoons and scrolls. It is connected to a similarly shaped plain board at the back by a turned stretcher. Extra support is given by a pair of plain brackets at the back. There are traces of the original paint and gilding.

Purchased for £5 17s 7d, part of a purchase of five chairs for £28. Two were bought by Sir Leigh Ashton and two by Ralph Edwards for themselves.

Historical significance: This form of chair was introduced to England in the second decade of the 17th century, influenced by continental prototypes. Based on the Italian sgabello, a trestle stool with cartouche-shaped supports and a back, this chair has arms the shape of which recalls French caqueteuse armchairs. The design was probably inspired by furniture seen during Clein's Italian visit and the work of Inigo Jones with whom he was closely associated. The shell shaped back and the swags and pendant masks were appropriate ornament for the Classical interiors designed for English Court circles by Inigo Jones. This chair is a rare survival of courtly furniture from the early 17th century.

It has been suggested that chairs of this type were originally intended for long galleries and that this would explain why they often belong to large sets. A pair of similar chairs are shown in the Picture Gallery at Arundel House in the Strand in the portrait of the Countess of Arundel painted by Daniel Mytens in 1618. Evidence from contemporary inventories suggests that this type of Italianate furniture was sometimes displayed with Italian marble tables. By 1670 such chairs were no longer fashionable and those designed by Clein for the Long Gallery at Ham House appear as garden furniture in Henry Danckaerts' oil painting of Ham, as seen from the south front.

On the presence of Italian-style sgabelli chairs in England during the 17th century see: Simon Jervis, Furniture for the first Duke of Buckingham, in Furniture History vol.33 (1997), p48-74. Two surviving walnut sgabelli c.1625 with the initials GB, the Villiers arms within the Garter beneath a ducal coronet, and traces of white and green and heraldic paint (and possibly gilding), survive in the collection of the Earl of Jersey, and may be compared to other surviving chairs at Lacock (from Holland House) and Petworth. Jervis suggests that they were made to furnish a gallery or garden building at York House or Chelsea House, where large sets of 'guilt stooles' are recorded in 1635.

Armchair, carved oak, with a shell-shaped back and two cartouche-shaped supports, the one at the front carved with a mask and festoons. English, about 1625.

Similar chairs were stated by Horace Walpole in his Anecdotes of Painting to have been designed by Franz Cleyn (b. Rostock 1582, d. London 1658) for the Gilt Room at Holland House, Kensington. Although the shape of the arms recalls French 'caqueteuse' armchairs, the decoration of the chair follows the Italo-Flemish style and is completely alien to the native English tradition. [1968]
RECENT CONSERVATION
CHAIR, DESIGN ATTRIBUTED TO FRANCIS CLEIN (1582-1658)
English, about 1625
Painted oak


The form of this chair is based on the Italian sgabello, a trestle-stool with cartouche-shaped boards fixed with mortise and tenon joints to a seat with a circular depression. The shell-shaped back and the swags and pendant masks were appropriate ornament for the Classical interiors designed for English Court circles by the architect Inigo Jones (1573-1652).
Like Jones, Francis Clein spent several years in Italy, before working for Christian IV of Denmark on the decoration of the Royal Palace at Rosenborg. He came to England in the mid-1620s and was appointed designer to the Mortlake tapestry manufactory. He also designed interiors at Ham House, Richmond and Holland House, Kensington. This chair has no history of ownership but is similar to a chair from the Gilt Chamber at Holland House, which was decorated to Clein's direction in the 1620s. The shell-shaped chair back echoed the shell-decorated niche above the central door in the Gilt Chamber. Recent cleaning of this chair by staff of the Conservation Section has revealed traces of original gilding.
By 1670 such chairs were no longer fashionable and those designed by Clein for the Long Gallery at Ham House appear as garden furniture in Henry Danckerts' oil painting of King Charles II being presented with a pineapple in the grounds at Ham.
As relatively little furniture of royal quality remains from the early 17th century, this chair is a rare survival.
[Tessa Murdoch] [07/1995 - 08/1995]
ARMCHAIR
English: About 1640
The design attributed to Francis Cleyn (1582-1658)
Carved oak, formerly painted and gilt.

This hall or gallery seat, ornamented in the Classical style, is designed in the manner of an Italian sgabello seat.
The curved back is carved with a scllop shell, an attribute of Venus, the nature goddess, which rests on the curved arm-rests. The compass back seat is dished in the centre, and is supported on solid panel trestles at front and back. The front panel with scroll strapwork borders is ornamented with a garlanded classical mask.
A set of seat furniture, formerly at Holland House, London were noted by Horace Walpole, Anecdotes of Painting, 1762-71, as being 'carved and gilt, with large shells for backs ... from his [Cleyn's] designs'. They were also illustrated in C.J. Richardson, Old English Mansions, 1842, 11, p.12. Other chairs of this pattern appear in Henry Danckerts' oil painting of the gardens at Ham House executed in the 1670s. [1968 - 1989]
ARMCHAIR
Carved and painted oak.
ENGLISH; 1630s

Similar chairs formerly in the gilt room at Holland House, Kensington were apparently designed by Francis Clein (1582 -1658). Clein was Danish by birth but had spent four years in Italy before coming back to work for the English Court, most notably as designer to the Mortlake tapestry factory. The design and construction of this chair recall that of Italian sgabelli and have no English precedents. Conservation work on another chair from the set has revealed that the original paint finish resembled a yellowish marble. [06/1989]

Similar chairs were stated by Horace Walpole in his Anecdotes of Painting to have been designed by Francis Clein for the Gilt Room at Holland House, Kensington. 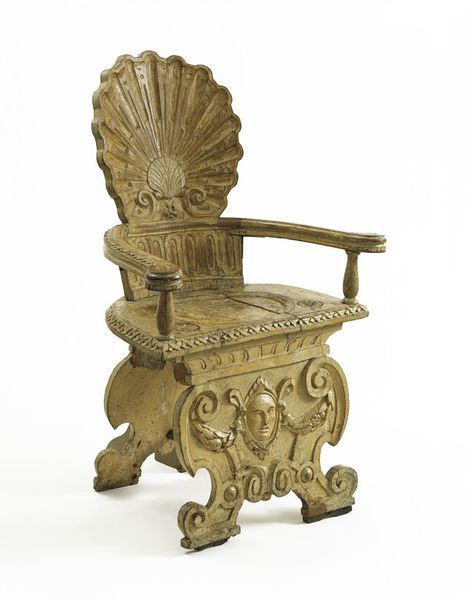