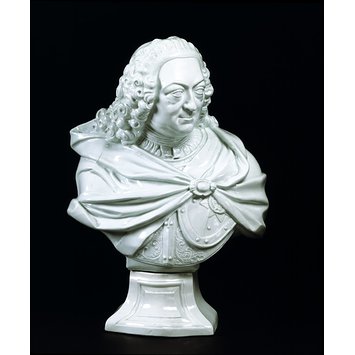 Object Type
The bust is comparatively large, and was probably made for display in an entrance hall or other spacious domestic or civic interior. Such busts would have been used to display their owners' patriotic support for the monarch.

Time
George II (reigned 1727-1760) is shown in his later years. This, and the patriotic and victorious elements on the bracket made to accompany the bust, suggest that it was made at a time of victories, such as those of 1757-59 - Clive at Plassey in India; Wolfe at Quebec - during the Seven Years War against France.

Design & Designing
The bust was probably copied from one cast in plaster. Such commercially-produced plasters were occasionally used at British porcelain factories as prototypes for production, especially for figures and busts. Some plaster-makers knew that their production lines were being reproduced by the ceramics factories (and they charged them accordingly), but others were on their guard against plagiarists.

Materials & Making
The bust is one of a group of sculptural porcelains that have been chemically tested and found to contain soaprock. This mineral was mined under licence in Cornwall. From documents we know that Richard Chaffers (1731-1765) of Liverpool was among those who used it as an ingredient in making porcelain, and he currently seems the most likely manufacturer of the several versions of this bust.

Bust in white soft-paste porcelain of King George II wearing a large wig, a loose cloak clasped in front over an embossed cuirass, and the star of the Order of the Garter is partly concealed by the cloak, and his head is turned towards the left, and he is on a pedestal with a bowed front with a moulded panel.

Liverpool (possibly, made)
Vauxhall (probably, made)

Purchased by Lady Charlotte Schreiber from Butti, Edinburgh, for £5 in October 1869. In her Journals (vol. I, p. 57) she recorded: 'Lady Hopetown took us into Edinburgh to the shop of one Butti in Queen Street. The first thing that met the gaze of the delighted C.S. was a Plymouth bust (with pedestal) of King George II. exactly the same as that which belonged to the late Dr. Cookworthy of Plymouth, which came to him from the manufacturers and which he has left as an heirloom in the family. Butti (knowing nothing of its extreme value) sold it to us for £5.'
Acquired as Chelsea porcelain.

Daniels, Pat. The Origin and Development of Bow Porcelain 1730-1747, Resurgat Publishers, Oxon, 2012. See pp 271-278 for an alternative attribution to the Bow porcelain factory for this bust and its bracket, another in the National Museum of Ireland, Dublin and a further bracket in the British Museum.
Daniels, Pat, Ramsay, Ross and Gael. The George II Busts and Historic Wall Brackets, The motivation, symbolism and technology by which the models can be dated to 1745-6 and attributed to the first Bow Factory in Middlesex. 2013, Resurgat Publishers, Oxon.
Mallet, J.V.G.. Some Baroque sources of English ornamental porcelains A paper read at the weekend seminar Fire and Form – The Baroque and its influence on English Ceramics, c. 1660-1760, 26th-27th March 2011, published English Ceramics Circle, 2013, pp123-146, illustrates the version at Leeds City Art Galleries, fig. 34, and favours an attribution to the Vauxhall porcelain factory
For this bust, and the group to which it belongs, see also Roderick Jellicoe, 'Liverpool Porcelain: Fact or Fiction?', Northern Ceramic Society Journal, Vpl. 28 (2012), pp. 175-190
Hillis, Maurice. Liverpool Porcelain, 1756-1804. 2011, pl. 5.185, where it is suggested that an attribution to Vauxhall seems more likely than to the Chaffers factory

British Galleries:
These pieces show how styles were used alongside one another. George II wears armour embossed with Rococo scrollwork, but otherwise his portrait has few Rococo elements. The bracket however, is strongly asymmetric and emphatically Rococo in design. Britannia and Fame are seated on a slain dragon. [27/03/2003]

Order of the Garter; Cuirass 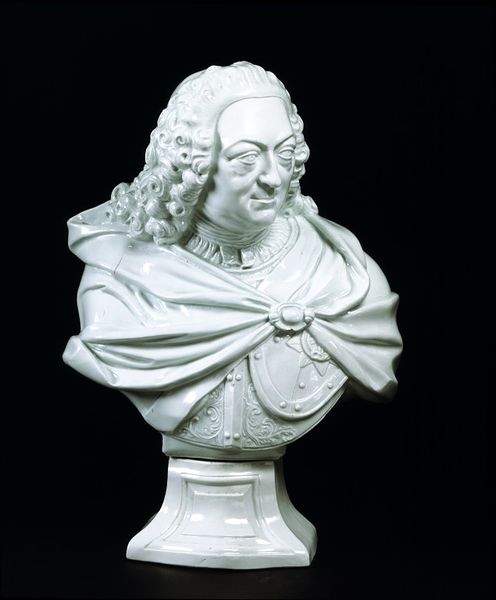