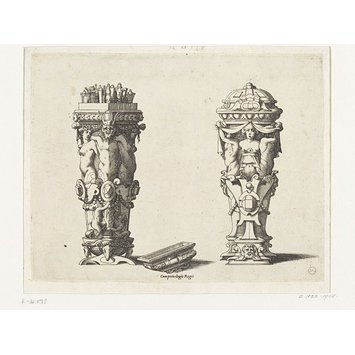 This print belongs to a set of nine engravings showing designs for domestic objects to be made in metalwork such as ewers, candlesticks, tureens, etc. The series was traditionally attributed to René Boyvin, a French engraver, etcher and designer of the Fontainebleau school. The school is named for the circle of artists involved in the decoration of the château of Fontainebleau, built from 1528 under the patronage of Francis I near Paris in France. Their work is often characterised by intricate ornamentation and the use of mythological settings. The print has now also been ascribed to Pierre Milan and to Antonio Fantuzzi, artists also associated with Fontainebleau. The artist who drew the original designs for the prints was long thought to be Rosso Fiorentino, the Italian Mannerist painter and draughtsman who worked at Fontainebleau between 1530 and 1540 and drew designs for goldsmiths while he was there. But it has also been suggested that it was in fact Léonard Thiry, a Flemish painter and draughtsman who worked as Rosso’s assistant at Fontainebleau. Nevertheless, the influence of Rosso Fiorentino in these prints is very strong.

Lettered in the lower centre of the plate:

This print belongs to a set of nine engravings showing designs for objects in metalwork such as ewers, tazza, nefs, etc. The series was traditionally attributed to René Boyvin. It has now also been ascribed to Pierre Milan and to Antonio Fantuzzi (Zerner, L’Ecole de Fontainebleau, 1972, no. 438; Brugerolles, Le dessin en France au XVIe siècle: dessins et miniatures des collections de l'Ecole des Beaux-Arts, 1994, pp. 104-106). As to the artist who drew the models for the prints, it was long thought to be Rosso Fiorentino, due to Vasari’s statement that Rosso, during his stay in France, had drawn designs for goldsmiths. But Jessen in 1920 (Der Ornamentstich) and Kusenberg, in 1933 (‘Autour de Rosso,’ in La Gazette des Beaux-Arts, X, 1933, pp. 158-72), suggested, among others, that it was in fact Léonard Thiry. E. A. Carroll in The Drawings of Rosso Fiorentino (1976, pp. 413-414) confirmed this hypothesis. Nevertheless, the influence of Rosso in these prints is very strong.

René Boyvin, Pierre Milan or Antonio Fantuzzi, attributed to. Design for two cutlery containers. One of eight plates from a suite of nine designs for metalwork objects. France, 1540-1560. 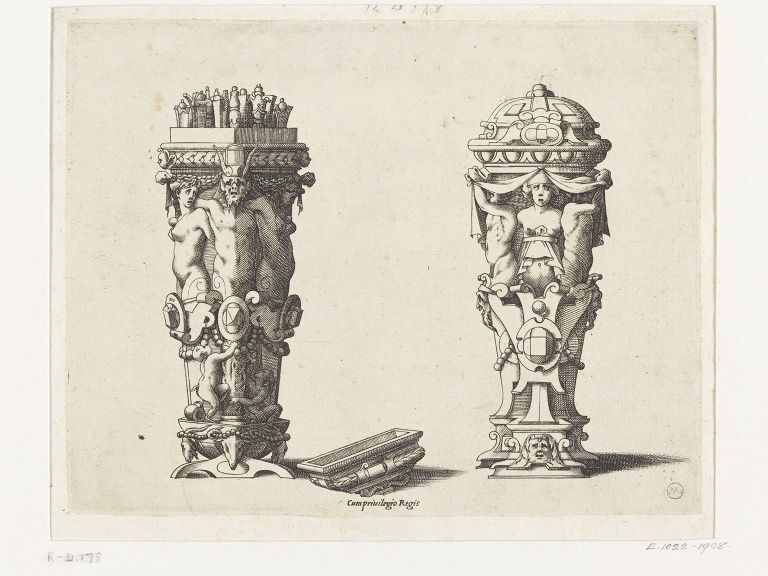