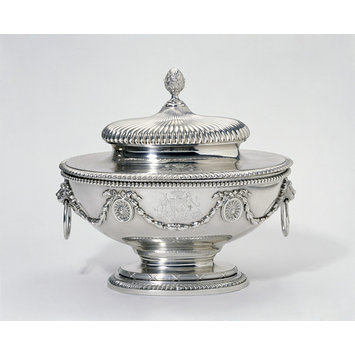 Object Type
Large tureens for serving soups and stews during the first and second courses of dinner were adopted by the British in the early 18th century, following the lead of the French Court. Although William III travelled with a 'soupe dish' before 1700, the earliest reference to a 'toureene' in Britain concerns the silver issued to Henri de Massue de Ruvigny, Earl of Galway (1648-1720), as Britain's Ambassador to Portugal in 1708.

Sets of tureens were of primary importance on the grandest dining tables of the 18th century, and a complete dinner service would include two pairs to be placed one at either end of the table and two flanking the centrepiece. In France, tureens were supplied with stands, but this was not often the case in Britain. They were expensive items which added to the theatrical display of the dinner table. John, 3rd Earl Waldegrave (died 1784), ordered a 'terrine and cover' from the firm of goldsmiths Parker & Wakelin in 1770 which cost £54 19s.

People
This tureen, from a suite of tureens, was commissioned by William, 4th Earl Fitzwilliam, and designed by the architect Sir William Chambers (1723-1796), who had been employed to carry out alterations to one of the Earl's country properties and his London townhouse in the 1770s. Chambers appears to have been most active in designing for silver and ormolu (decorative bronze ornament, often mounts for furniture) between 1767 and 1772, but his design ideas were influential in the silver trade for many years.

The tureen was made by the silversmithing partnership of Daniel Smith (active 1753-1788) and Robert Sharp (1757-1803), who worked at the top end of the market supplying silver dinner plate and candelabra to prestigious retailers such as Parker & Wakelin and the Royal Goldsmiths Jefferys, Jones & Gilbert. They also made a number of celebrated race cups, one of which was after the design of the architect Robert Adam (1728-1792).

Design & Designing
The design of the tureen is almost identical to a pencil and wash drawing in the V&A by Sir William Chambers's assistant, John Yenn (1750-1821), entitled 'Design for a Silver Soup Tureen' and dated 1770. The silver tureen differs from the drawing in some of the detailing. The base has been left plain rather than decorated with banded waterleaves, as it is in the drawing, and some of the swags are tied with ribbons, with paterae (flat circular or oval ornament) replacing the continuous pattern of lions' heads and loops of the drawing. These changes may represent the preferences of the patron.

A silver tureen on an oval and spreading foot with gadrooned and ribbon-tied bands, the bodies applied with rosettes and hung with ribbon-tied drapery swags, the partly fluted detachable spool-shaped covers with acanthus bud finials, each engraved with coats-of-arms and crests with earl's coronet above.

Engraved with the arms and crest of William, 4th Earl Fitzwilliam, and with the motto: APPETITUS RATIONI PAREAT
Let the appetite be obedient to reason.

This tureen, (one of a pair), was commissioned by William Fitzwilliam, 4th Earl Fitzwilliam (1748-1833); engraved with his arms and crest, with the motto: APPETITUS RATIONI PAREAT (Let the appetite be obedient to reason). Designed by the architect William Chambers (born in Goteborg, Sweden 1723, died in London, 1796); made in London by Daniel Smith and Robert Sharp (in partnership 1763-1788). William, 4th Earl Fitzwilliam employed Chambers to carry out alterations at Milton in 1770-1776 and at his London house in Piccadilly in 1770-1.

Historical significance: These tureens relate to a pair supplied for the 10th Earl of Pembroke marked by Sebastian and James Crespel in 1771-2. The spirally gadrooned covers are common to both designs as are the naturally inspired acanthus bus finials. These features derive from French silversmiths' work.

The V&A collection of designs by Chambers for silver includes two further tureens. One features caryatid supports copied from a drawing by the 16th century Italian artist Polidoro da Caravaggion in Chambers' own collection. The cover is surmounted by griffins. The other repeats the spirally gadrooned cover but has naturalistic handles. The latter design was first made up in 1769 for the 3rd Duke of Marlborough at Blenheim Palace, Oxfordshire and copied again for the same patron in 1791. The Duke of Marlborough was brother in law of the 10th Earl of Pembroke and may have recommended the architect. Chambers worked at Marlborough's Oxfordshire and London homes for eighteen years from 1757 to 1775.

Sir William Chambers was active as a designer of silver and ormolu between 1767 and 1772 at a time when the revival in classical style was gaining acceptance in interior decoration and architecture. Although initiated for particular private patrons, the designs were taken up by London silversmiths during the 1770s and 1780s.

There is a group of fourteen designs for metalwork by Chambers' pupil John Yenn in the V&A which are office copies or finished versions of original designs by the architect. John Yenn was in his early twenties when these drawings were made and still completing his apprenticeship. One of these designs, for a griffin candlestick, was later published by Chambers' himself as his own design.

British Galleries:
From about 1760 architects began to be involved in the design of every element of interiors, from carpets and seat furniture to door handles and silver. Neo-classical interiors by major architects showed a remarkable stylistic unity. Here, the pioneering Neo-classical designer Sir William Chambers has used small-scale versions of the swags, oval paterae and lions' head bosses that also appeared on his buildings. The gadrooning (inverted fluting) on the cover is a motif he learned from French Neo-classical design. [27/03/2003] 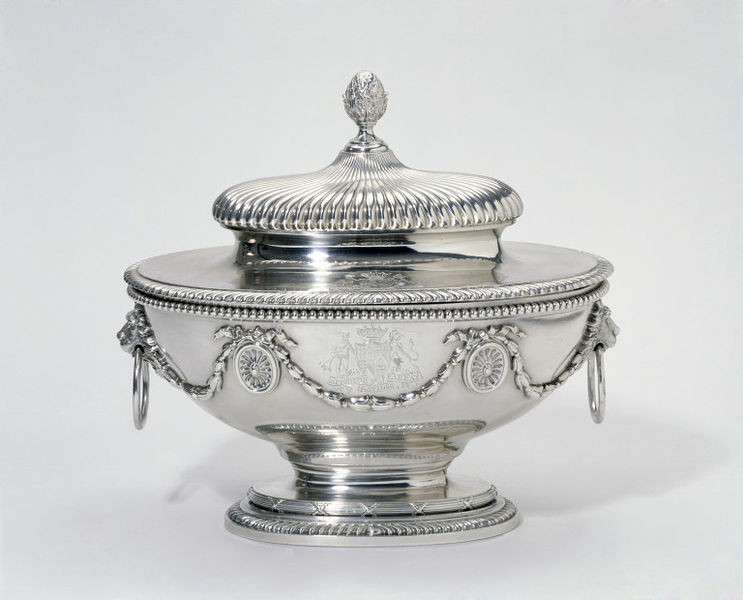