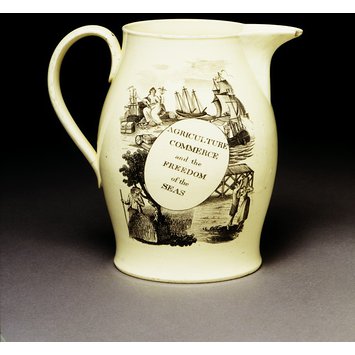 Object Type
During the last quarter of the 18th century the barrel shape was one of the most popular forms used for jugs of all sizes and types. It is found in glass, red-stoneware, porcelain, creamware and pearlware. After about 1800 its popularity waned in favour of the 'Dutch' jug with straight neck and globular body.

Trade & Trading
Towards the end of the 18th century, trade with the new-founded United States of America (particularly the slave trade) had shifted from Bristol to Liverpool, which already handled massive exports of pottery from Staffordshire. Soon the United States was bombarded with goods of all kinds, including creamware jugs and mugs celebrating its separation from Britain. These were made in Liverpool and Staffordshire by ambitious potters for whom business came before national pride. The list of States on this jug shows that it was made after Kentucky joined the Union in 1792, but before the admission of Tennessee in 1796.

Materials & Making
It was not long after the perfection of plain creamware in the early 1760s that its bare surfaces were ornamented with overglaze black printing. By 1762 the Staffordshire potter Josiah Wedgwood (1730-1795) had engaged the services of the pioneer printers Sadler & Green in Liverpool. There, with the huge popularity of satirical and political cartoons in the wake of the French Revolution, the technique was exploited to the full, using both Staffordshire and locally-made creamwares.

Jug of earthenware transfer-printed in black enamel, and barrel-shaped with a spreading base and mouth, loop handle and projecting lip. On one side is an oval panel set slantwise and inscribed 'AGRICULTURE / COMMERCE / and the FREEDOM / of the SEAS' and surrounded by a harbour scene with ships, a harvester, a milkmaid and other emblems of agriculture and commerce. On the other side is a list of eighteen states of America with their populations, printed against a background of rocks and trees, with bales, one directed to London, and casks below a ship and harbour at each side, and above are two angels holding a scroll inscribed 'Prosperity to the UNITED STATES OF AMERICA'.

Printed (and possibly made) in Liverpool, England

Jug of earthenware transfer-printed in black enamel, and barrel-shaped with a spreading base and mouth, loop handle and projecting lip, printed in Liverpool and possibly made in Liverpool, ca. 1795.

British Galleries:
By 1815, more than half of Britain's exports were going to North America. This jug would have been sent directly from the Liverpool docks. On one side it says 'Prosperity to the UNITED STATES OF AMERICA' and lists the first 18 states to be created. [27/03/2003] 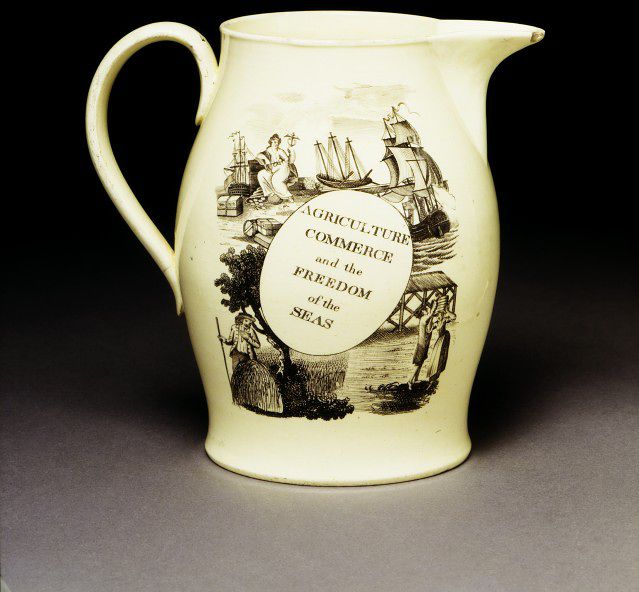