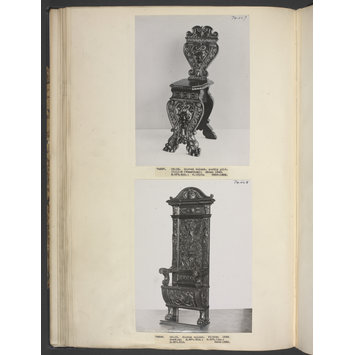 Sgabello chair, carved and stained walnut, partly gilt (see below). The back rest chair is urn-shaped, emblazoned with the star of the Steno family of Venice on the crest, and decorated with a bearded satyr mask. The seat is shaped like an elongated octagon with gadrooned edges at the front and sides, and its surface is flat. The side aprons immediately below the seat are trapezoidal, with ogee-shaped bottom edges. The front board or legs is vase-shaped, decorated with a bearded satyr mask, and terminating in foliate lions' feet.

The back rest is crowned with a crest formed by two brackets converging above the Steno family star. In the bottom corners of crest are two husks. The crest rests on two tiers of friezes - the upper one gadrooned and the lower one husk-and-pod. The bearded mask is flanked by two strap-like borders decorated with a vine-leaf scrolls and crowned by two narrow converging scrolls that sprout from the main straps. The space between these scrolls and the bottom of the husk-and-pod frieze is filled with imbricated disks, converging towards the centre. The borders scroll like an 's' at the bottom and curl over at the top revealing scales on the other side. These rest on a gadrooned base, immediately above the seat. The five edges, making up the front and sides of the octagon are gadrooned, whereas the three at the back are lobed in a fish tale pattern and left ungadrooned. The front board or legs is surmounted by a broad chain frieze, with a flower in each circle, resting on a narrow ribbon frieze immediately below the seat. The satyr mask and vine scroll borders are similar to those on the back rest, but they terminate in lions' paws with foliate shins rather than 's' scrolls. A husk stretches from between the paws to the chin of the satyr.

The back and front boards, forming the legs, were probably each made from one piece of wood. They are fixed with two nails at each end to the side aprons, which link them together. The seat is fixed with two nails each to the tops of the front and back boards. The backrest is also made of one piece of wood and terminates in a wedge, which fits through a slot at the back of the seat and is held in position by three smaller wedges. The back rest and front board are chamfered at the back, but the back board, a later replacement, are not. The grain runs vertically along the back rest and back and front boards, horizontally along the aprons, and back to front (i.e. vertically) along the seat.

The gilding has acquired a dirty yellow surface over the ages. Bole is visible on the star on the back and a single husk between the paws. Otherwise, white gesso rather than bole tends to show through underneath. (Are there traces of early gilding on the right lock of hair of the mask on the back rest?)

Gilding is applied to various highlights of the back rest, seat and front board. On the crest, these include the borders of scrolls, the star, husks in the corners, the edges of the individual gadroons and the narrow guilloche moulding. On the main part of the back rest, these include highlights of the faces of the mask, such as the hair, beard and stylized wiskers, as well as the stems and leaves of the vine and the scales at the reverses of the borders at the top. Traces of gilding, mostly in the form of red bole, are detectable on the individual ovolos of the gadrooning round the edge of the seat. Gilded highlights on the front board are as follows: the links in the chain frieze, the pommels of the rosettes immediately below the seat. Likewise the edges of the borders, and vine leaves framing the satyr mask, as well as the converging scrolls above his head; the satyr's hair and whiskers, and husk immediately below his chin, and the foliate ornament above claws of lions' feet.

This object is said to have belonged to the Steno family of Venice and their house 'remained furnished in the old way down to modern times' (J.Hungerfold Pollen, 'Specimens in Ancient and Modern Furniture, p. 104). This formed part of the collections of Jules Soulages, the Toulouse collector and lawyer. They were shipped over from Toulouse and exhibited at the Museum of ornamental Art from December 1856 to January 1857, paid for by subscribers and bought piecemeal by the Government between 1859 and 1861.

Historical significance: This object has a provenance - the Steno family of Venice, and it is a largely authentic piece, of which other pieces in the set are copies. Whilst there exist English chairs modelled on the Italian Sgabello with good provenances, most Italian examples in public collections or on the art market are 19th century copies. The term 'Sgabello' simply means stool, but by about 1840 the term was applied to Italian chairs made from ornately carved boards.

J.C.Robinson, Catalogue of the Soulages Collection: being a descriptive inventory of a collection of works of decorative art, formerly in the possession of M. Jules Soulages of Toulouse; now, by permission of the Committee of Privy Council for Trade, exhibited to the public at the Museum of Ornamental Art, Marlborough House (London 1856), nos. 612-619, p. 168

The uppermost section of the chair back is decorated with a Star, the device of the Steno family, and the chair is recorded as having been part of the original furnishings of the Palazzo Steni of Venice. [Pre-2006] 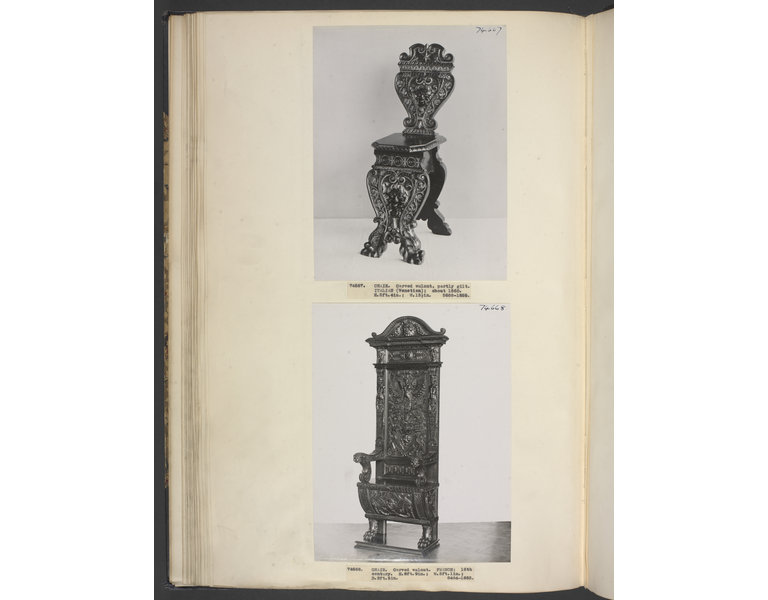