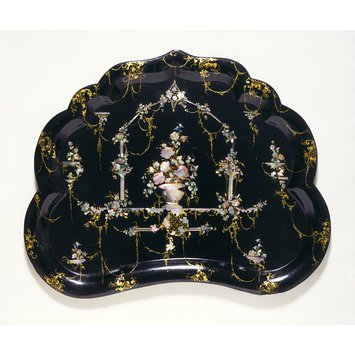 Object Type
The shape and decoration of this tray show the influence of 18th-century French styles on 19th-century designers and makers. The tray is shaped so as make it easy for a maid to carry.

Ownership & Use
Trays were supplied in sets of three or more in different shapes and sizes for serving tea in drawing rooms. As rooms used mainly by women, these were most likely to be decorated in styles, patterns and colours based on 18th-century French designs, similar to those of this tray. Such designs were fashionable for these rooms as they were light and decorative and so considered feminine. Papier mâché ‚ was preferred to metal for trays because it dulled the sound of clinking glass and china when used for serving food or drinks.

Materials & Making
Papier mâché was made by pasting layers of paper over moulds of the required shape, a job mainly done by women and girls. The object was then oiled and baked at very high temperatures. The shape of this tray would have been finished by a cabinet-maker before it was varnished and dried in a stove. The mother-of-pearl was applied before the painted decoration, which was followed by a final coat of varnish, further stove drying, and polishing.

Papier mâché, japanned, parlour-maid's tray, shaped for carrying close to the front of the body. There is shell inlay on a black ground, with the outer rim convex and scalloped, and the inner rim slightly concave and plain. The surface is decorated with a painted design of floral brackets and festoons, incorporating in the centre an arch of floral trellis containing a vase of flowers.

Papier mâché, japanned, and painted with appliqué of mother-of-pearl

British Galleries:
Papier mâché‚ was used to make many small, decorative objects in the French style. This design of arches with light swags of flowers was loosely based on engraved designs by the French designer Jean Berain I (1640-1711). Reprints of these engravings were published from 1849 onwards. [27/03/2003] 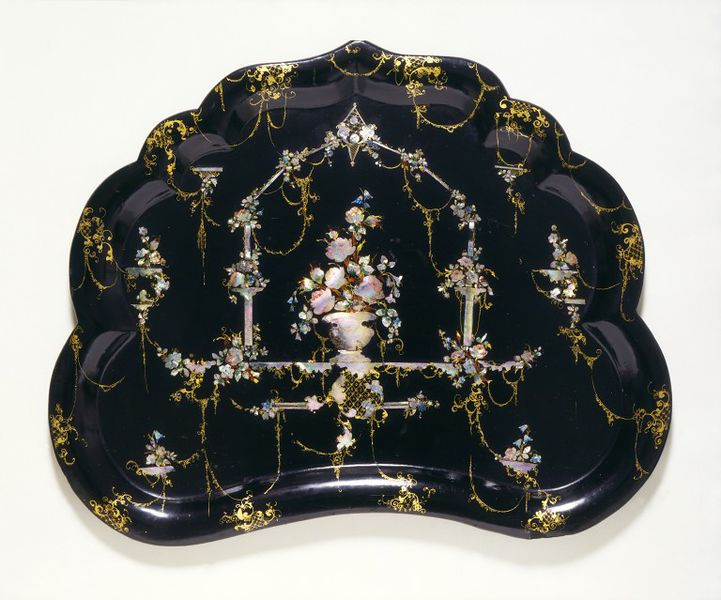