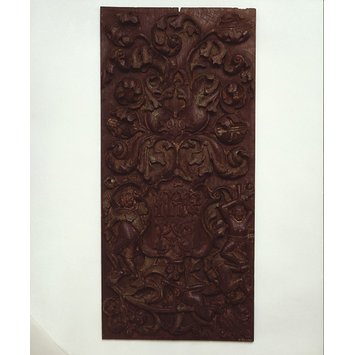 Object Type
During the Tudor period heraldic motifs and mottoes were often incorporated into the interior and exterior decoration of a building. Craftsmen exploited the motifs for their intrinsic decorative qualities, though it was the information that they conveyed about the status and wealth of the owner that was most important. This panel would have originally formed part of a richly painted and gilded scheme of carved wall decoration.

Places
The panel is one of a set of four which are said to have come from Windsor Castle. Henry VIII (reigned 1509-1547) encouraged the use of heraldry in the decoration of his residences, as well as in the dress of his subjects and servants. At Hampton Court Palace the principal decorative motifs were the coats of arms and badges of the King and Queen. Set in windows, moulded on ceilings, embroidered on hangings and upholstery and carved in stone above gate and doorways, they had to be changed each time Henry remarried.

Design & Designing
During Henry VIII's reign legislation was passed relating to the use of armorial devices. To ensure that they used the correct forms, carvers and painters owned and consulted pattern books. Unfortunately, none of these books survives. However, there are surviving royal records of arms and heraldic beasts, for example, those by Sir Thomas Wriothesley (died 1534), Henry VIII's Garter King of Arms. These records would have been used to give advice to painters involved in the decoration of the royal palaces.

Panel of carved oak with traces of colour and gilding. The upper part is carved with leafy scrollwork. On the lower part is a shield with the letters 'I H S' and 'I C' united by a cord. Around the shield amid interlacing stalks and leaves are four human figures, one with a bow and arrow.

Said to have come from Windsor Castle.

One of four carved oak Tudor panels, of English work, inspected and recommended for purchase by H. Clifford Smith on 8/7/11.

27 July 1911 Minutes of Lehfeldt
describes the four panels "forming a series, carved with shields and scrollwork in high relief. One panel bears the date 1540". The whole surface was originally painted in colours, but the colour has partially perished. He does not doubt their genuineness and recommends purchase of this "interesting set" based on their early date and fine character.

British Galleries:
Heraldic motifs on objects do not always relate to someone's coat of arms. This panel probably came from a room lined with similar panels. A shield-shaped cartouche contains the letters IHS (Iesus Hominum Salvator, meaning Jesus the Saviour of Men). The two semi-naked men are placed like heraldic supporters. [27/03/2003]

Said to have come from Windsor Castle 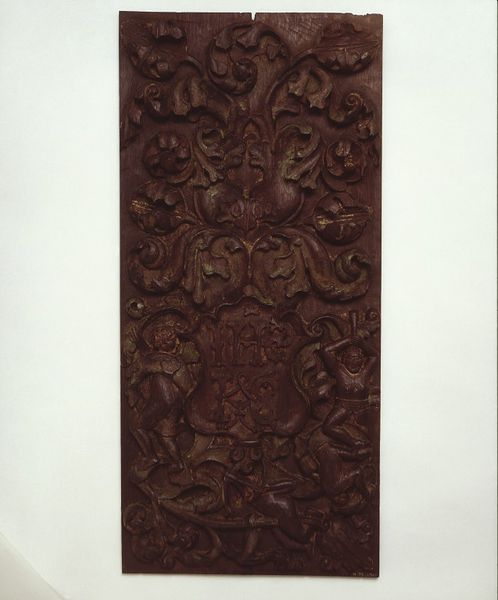