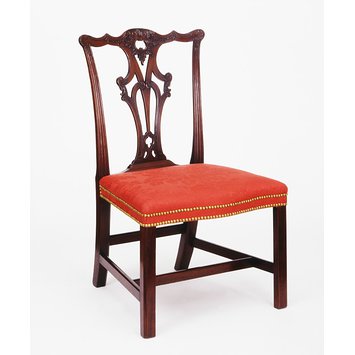 Object Type
Side chairs were designed for dining or playing at cards. When not in use, they were placed against the wall, where the elaborate backs created a decorative effect.

Design & Designing
This is the only chair design by Thomas Chippendale (1718-1779) which appears twice in the 3rd edition of the The Gentleman and Cabinet Maker's Director (1762). The design appeared in the first edition published in 1754 (the plate was engraved the previous year). The 18th-century inscription on the inner face of the shoe of one of the chairs in this set (W.62-1940), '6 pedistals for Chipendel's Backs', shows that they were then recognised as a Chippendale design. 'Pedestal' was the 18th-century term for shoe, the section immediately above the back rail surrounding the base of the back splat.

Materials & Making
Chippendale's notes to the plate recommend that the design should be carefully drawn to scale before carving. He indicates that the fabric used to cover such chairs usually matches the window curtains. The height of the back should never be more than 22 inches (56 centimetres) above that of the seat. The quality of the mahogany used for this set suggests they were made in the north-west of England, where the finest timbers were imported directly from the West Indies.

The six chairs W.62 to 67-1940 were purchased by Robert Tomes in Shipston-on-Stour, and restored for him in 1876 by a cabinet-maker of Stratford-on-Avon named Hancock. They were bequeathed to the Museum by Robert Tomes's great-niece, Miss Amy E Tomes in 1940. Letters and drawings relating to the bequest were also acquired, museum no. W.85-1940.

A faint pencil inscription on the inner face of the shoe of another chair in the set (W.62-1940) chair reads '6 pedistals for Chipendels Backs', referring to the design in Chippendale's 'Director' on which the chair-backs wer based.

British Galleries:
This was the most copied of all Chippendale's chair designs. Many versions were made by furniture makers throughout Britain and overseas, in a wide range of qualities. Without evidence from bills and inventories it is impossible to date such chairs closely. We know that workshops were producing chairs of this pattern more than 30 years after the 'Director' was published. The video nearby shows this chair in detail and its relationship to Chippendale's design. [27/03/2003]

Closely based on a design by Thomas Chippendale (plate XII, right, in the 1st and 2nd editions of the "Director", 1754 & 1755, and plate XIII, right, repeated in plate XIV, right, in the 3rd edition of the "Director" (1762); the original plate is dated 1753). But the carving is rather flat and lifeless, suggesting that the chair is probably provincial. It differs from the design in certain respects: the C-scrolls at the top of the splat disappear into the top rail rather than ending in a round scroll; and instead the top rail is peaked above the points where the C-scrolls join it. And the forked section of the splat is solid, not pierced, below the scrolling foliage (about a third of the way down). Nevertheless, the faithfulness of the copy is another indication that the chair is likely to be provincial; generally, London makers would not have been so reliant on printed designs. 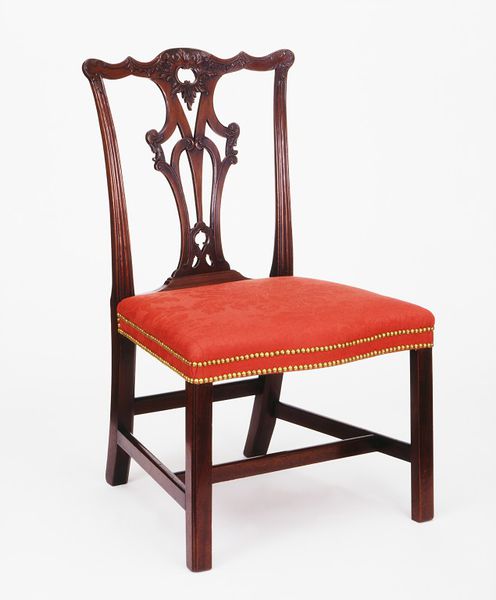