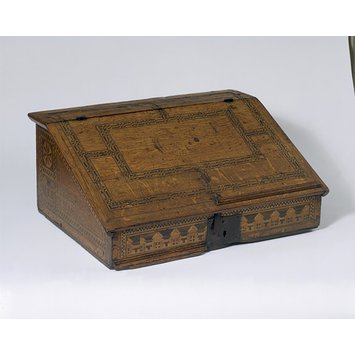 Object Type
The writing desk developed in England at the end of the 16th century. Easily portable, it would be placed on a table and the writer or reader would stand in front of it. The interior of this example was originally fitted with a nest of eight drawers (four are now missing). These would have been used to store pens, paper and other writing materials. A moulded ledge on the desk lid prevented books and paper from slipping.

Use
An engraved portrait in the V&A of the poet Sir Thomas Overbury (1613) by Renold Elstracke shows him leaning on such a table desk with his left arm. He writes his own epitaph with his right hand, the paper overlapping the top of the desk. A small inkpot is positioned to the right of the paper. The presence of ink stains on the top ledge of this desk suggests that it was used in a similar way.

Subjects Depicted
The side, front and back of the desk are inlaid with designs of buildings. This type of inlaid decoration took its name from Henry VIII's Palace of Nonsuch near Ewell in Surrey, built between 1538 and 1547 [demolished in 1682]. It is associated with so-called Nonsuch chests. Fanciful buildings with pinnacles and towers framed by bands of classical bead and reel ornament are typical features of Nonsuch decoration.

ENGLISH: Period of Queen Elizabeth (1558-1603)
Writing desk of oak inlaid with bog oak and a light wood; the interior is fitted with a nest of drawers, two of which are lined with printed paper of the 16th century. The top and hinged sloping lid are decorated with an arrangement of bands of checker ornamentation; on the front, back and sides are designs of buildings (in the style of the Palace of Nonsuch) within boarders of checker ornament; on each side is also an inlaid –eight-pointed star. The lid has a moulded ‘stop’ and the front a moulded base. Inside the desk is a nest of eight drawers (four missing) with moulded fronts. The desk has a lock and key. The framework of the drawers is decorated with checker ornament in paint in imitation inlay. Two of the drawers are lined with leaves from a 16th century edition of the bible in English. This ‘nonsuch’ style derives from Rhenish work of the 2nd half of the 16th century. The chequerboard pattern in turn derives from Italian ‘certosina’ work of the early 16th century.

Probably made in Southwark, London

22 December 1910, Owen Grant Ltd to Lehfeldt
inviting him to inspect a "nonesuch" desk which they believe to be unique.

24 December 1910 Minute paper, H Clifford Smith
reports on inspection of the desk. He finds this elaborately inlaid oak desk somewhat similar to the "nonesuch" chest (No.342-1905). He requests approval for purchase of this "rare and choice" object at £20.

3 January 1911 Minute paper, Lehfeldt
describes the desk "decorated in coloured woods with designs of buildings….and with checker patterns. The object is evidently genuine work of the second half of 16th century and apparently untouched. It is in fair state of repairs. Such objects are rare & there is not one in the museum".

These two pieces were probably made by European joiners who settled in Southwark, south London. About 400 furniture makers from areas now in Germany and The Netherlands worked in London between 1511 and 1621. They specialised in inlay techniques which were fashionable in Northern Europe at the time. [27/03/2003] 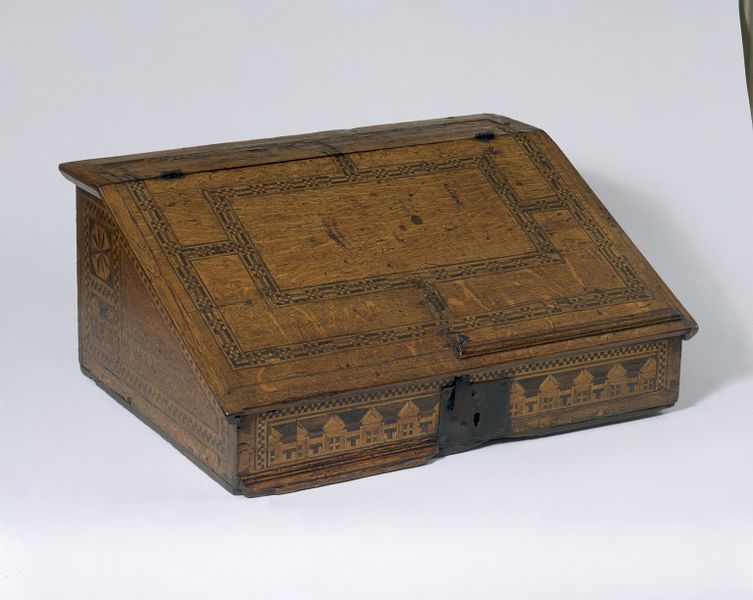