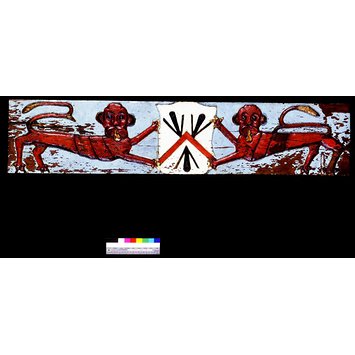 Object Type
During the Tudor period heraldic motifs and mottoes were often incorporated into the interior and exterior decoration of a building. Craftsmen exploited the motifs for their intrinsic decorative qualities, although it was the information that they conveyed about the status and wealth of the owner that was most important. This panel would have originally formed part of a richly painted and gilded scheme of carved wall decoration. Four heraldic panels survive.

Places
Maenan Hall, Caernarfonshire, was a late 15th-century timber-framed hall belonging to Conwy Abbey. Sir David Kyffin, a wealthy cleric, took possession of the house after the Dissolution of the Monasteries in the later 1530s and made it his family seat. He undertook some alterations before his son Maurice Kyffin transformed the house in 1582. It was probably Maurice who commissioned the heraldic panels, to display his status and allegiance to the Queen, Elizabeth I (ruled 1588-1603).

Design & Designing
During the reign of Henry VIII (1509-1547) legislation was passed relating to the use of armorial devices. In order to ensure that they used the correct forms, carvers and painters are known to have owned and consulted pattern-books. Unfortunately, no such patterns survive. However, there are surviving royal records of arms and heraldic beasts, for example, those by Sir Thomas Wriothesley (died 1534), Henry VIII's Garter King of Arms. These records would have been used to give advice to painters involved in the decoration of the royal palaces.

On a light blue ground argent, a chevron gules between three pheons, that is base pointing in chief; as supporters two grotesque lions painted red, the claws gilt.

11 November 1933 letter Miss Snee to the British Museum
describes three "curiosities" that she saved from the dustman when her furniture was sold. She encloses sketches and dimensions and enquires as to their value with an eye to selling them to the Museum.

28 November 1933 Minute of Ralph Edwards
reports on his inspection of the carvings. He dates them from the middle of the 16th century. Though the carving is crude, he finds the animal decoration and the painting "of considerable interest" and "unlike anything in our collections". He imagines they formed part of an exterior scheme of wall decoration.

2 December 1933 H C Smith Minute
describes the 4 panels as from the period of Henry VIII. Though somewhat crude in execution "they have a strangely marked character which gives them a certain air of distinction". The Royal arms of Henry VIII and the private "coat" (as yet unidentified) add to their interest.

5 December 1933 Brackett Minute
Reports on the observations of Professor Tristram's assistant who said "that the painting is undoubtedly original and, although extremely dirty, would come out quite bright when cleaned".

As Miss Legge is in very reduced circumstances it is proposed that the Musem offer her more than the £5 she is willing to sell them for. (In the end they are bought for £7.)

26 February 1934 V & A research (CM query - does this relate to W.30 or another, W.29, 31 or 32??)
shows that according to Papworth the impaled coat on the carvings should be described as:
Arms of Kiffen (including the lion rampant counterchanged of Einion Efell, Lord of Cynllaeth, lving 118(?) - 91, son of Madoc, last Prince of Powys Fadoc).

27 January 1934 letter Maclagan (Christchurch, Oxford) to Clifford Smith
lists several possibilities for the indentity of the Kyffin family bearing the coat-of-arms on the panel. One possibility is Sir David Kyffin (Canon of St. Asapl's in 1537) a noted pluralist. He had a son Maurice who built Maenam Hall apparently noted for "quaint heraldic carvings". Maclagan speculates that perhaps "Sir David, the Canon, was the owner of the two pieces of wood in question, and that he commemorated the marriage of his ancestor in 1230 by impaling the two coats instead quartering them as he himself did…" He further speculates that "perhaps the two pieces of painted wood were abandoned by the Kyffins on moving into Maenam Hall when it was built".

Comparable carved and painted panels discovered at Plas Maenan c1906, now held by the National Library of Wales at Aberystwith.

OAK PANEL with the arms of Kyffin

British Galleries:
The Tudor monarchy provided opportunities for ambitious families all over England and Wales to gain political power and status. Maurice Kyffin, appointed Sheriff of Caernarvon, Wales in 1579, was able to rebuild the Medieval house, Maenan Hall, Caernarfonshire in 1582 with lavish plaster and wood-carved decoration. This wainscot panel probably decorated the great hall at Maenan. [27/03/2003]