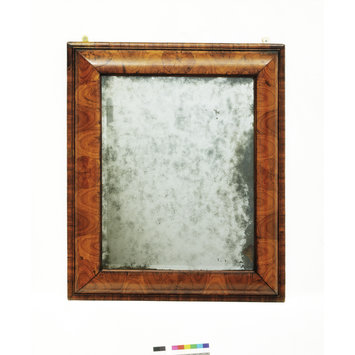 Object Type
The mirror is veneered with hardwood inset with geometric patterns. Rectangular mirrors of this type usually had a piece of ornamental carving along the top, known as a cresting. These rarely survive as they were often pierced and therefore vulnerable. The glass is of the correct thickness for this date, but the bevel may indicate that it is an 18th-century replacement.

Place
If the glass is original, it may have come from the glassworks in Vauxhall, London, established by George Villiers, 2nd Duke of Buckingham, in 1673.

Materials & Making
Princewood comes from the Spanish elm, Cordia gerascanthus, which grows in the West Indies and Central America. The wood is mentioned in the 1683 inventory of the contents of Ham House, Surrey, in which a desk was described as 'Prince wood garnished with Silver'. The centre of each convex side of the frame has a circular motif made up of 12 wedge-shaped pieces of oyster veneer.

Ownership & Use
Mirrors were luxury items and were often placed against the pier, or wall, between the windows. In this position, they were accompanied by a matching table and candlestands and maximised light by reflecting the candlelight.

Cushion frame of softwood veneered with oyster cut kingwood (a species of Dalbergia that was probably known as princes wood or princewood until the mid 1770s). Each of the four sides is centered on a circular device. The glass with tin amalgam silvering, backed with a non-original softwood board. The top rail is cut with two slots for housing a cresting (missing, possibly never fitted).
Fixings:

Veneered with princes wood; probably fitted with the original glass

24/4/47 letter Mrs Alford to Edwards
offers the Museum a large square mirror, original glass in walnut with oyster shell inlay. She is uncertain of its date.

10/5/47 R Edwards Minute paper
"This is an attractive Charles II mirror of kingswood, very rarely used on such a scale at that time".

'Cushion' frames of a broad ovolo section were fashionable in England c1670-1710, veneered with oyster cut veneers or floral marquetry, lacquered or japanned on a structure of softwood or oak (half-lapped or butt jointed). An arched cresting which slotted into the top rail - and which sometimes survives - was a prestigious feature, and may have been supplied as an optional extra.

'Oyster' veneering describes the use, from the 1660s in England, of oblique cuts of a richly figured timber such as cocus, princeswood, olive and walnut, to create a decorative surface.

After 1660, a significant expansion occurred in the production of glass in England, propelled by an increase in wealth generated by overseas trade, and the demand for window glass during the rebuilding of London after the Great Fire of 1666. Wall mirrors were one of the luxury furnishings that became fashionable after the restoration of Charles II, and the manufacture of looking-glass plate was established by George Villiers, 2nd Duke of Buckingham at Rutland Gate, Charterhouse Yard from c1663. By 1671 a new factory was established at Vauxhall, producing 'looking-glasses far larger and better than any that come from Venice' according to John Evelyn in 1676. In 1664 the Worshipful Company of Glass-Sellers and Looking-Glass Makers was incorporated, and licensed to the 'grinding, polishing, casing, fyling [ie foiling] and finishing [and selling] of looking-glasses', whether produced at Vauxhall or imported, probably from Venice. From the late 1670s onwards production in London expanded rapidly, so that England was a net exporter of looking-glasses by 1700, 'probably the largest producer and certainly the largest exporter of looking-glasses in the world' (Bowett, 2010, p.12). Mirror plates were made in England using the 'broad' process, blowing a bubble of glass that was truncated to form a cylinder, which could be cut down the middle and opened out into a flat, rectangular plate, in theory as large as 82 x 48 inches. (208 x 122cm). There is no evidence of the commercial production in England during the 17th century of cast glass as practised in France at this time. Specialist looking-glass makers carried out the laborious processess of grinding and polishing the glass smooth, and 'foiling' the back of the plate with tin and mercury.

Princes wood, apparently the same timber as later came to be known as kingwood (Dalbergia cearensis Ducke) was the most expensive cabinet wood in general use in the late 17th century. Examples of princes wood furniture are found from c.1668, and were supplied to the Royal Household during the 1680s and 1690s. It was imported to Britain from South America via Portugal and France, but in limited quantities after 1700, and it went out of use until the 1770s. The reddish colour fades to a dull, grey-brown.

British Galleries:
This mirror frame is veneered with a hardwood imported from the West Indies and known at the time as princewood. The pattern of oval shapes is called oyster veneer. It was created by cutting smaller branches at an angle across the rich grain, making a shape like an oyster shell. [27/03/2003] 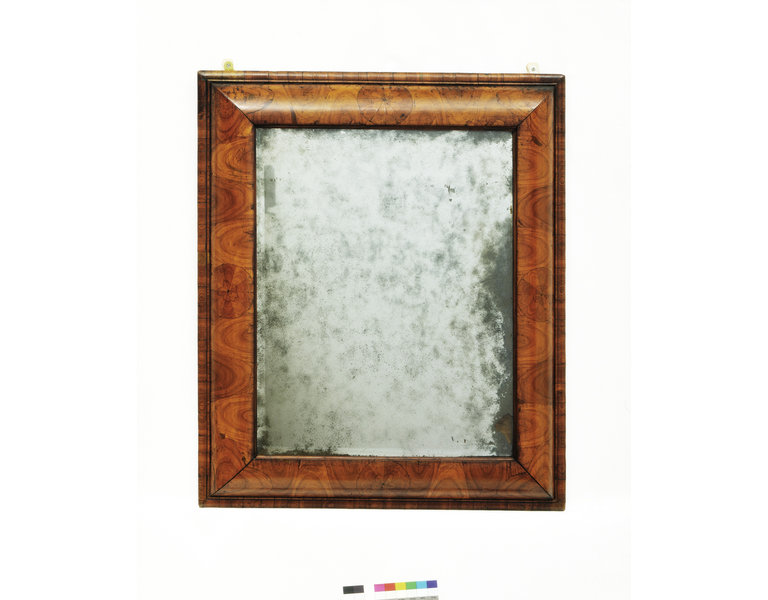