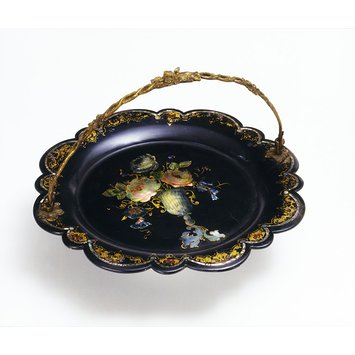 Object Type
This cake basket is typical of the range of small decorative and functional objects made of papier mâché that were used at mealtimes. Other examples include baskets for bread, stands for teapots and bottles, and sets of crumb trays with brushes.

People
Jennens & Bettridge, the firm run by Theodore Hyla Jennens and John Bettridge between 1816 and 1864, was famous for the range of papier mâché goods manufactured in its factory at 99 Constitution Hill, Birmingham, West Midlands. They also had premises at 6 Halkin Street West, Belgrave Square, London. The firm produced a range of products including writing boxes, trays, fans, and larger pieces of furniture such as chairs, tables and sofas. The bottom of this cake basket is stamped with the firm's name.

Materials & Making
Papier mâché was made by pasting layers of paper over moulds of the required shape, a job mainly done by women and girls. The object was then oiled and baked at very high temperatures. The shape of this basket would have been finished by a cabinet-maker before it was varnished and dried in a stove. The mother-of-pearl was applied before the painted and gilt decoration, which was followed by a final coat of varnish, further stove drying and polishing.

Mark :'Jennens and Bettridge. Makers to the Queen'

British Galleries:
Decorative cake baskets could be bought in silver or electroplate as well as papier-mâché. They could be handed round by servants or put on the table for guests to help themselves. Mappin Brothers offered silver baskets for as much as £8, whereas electroplate could cost as little as £1 1s (£1.10p). [27/03/2003] 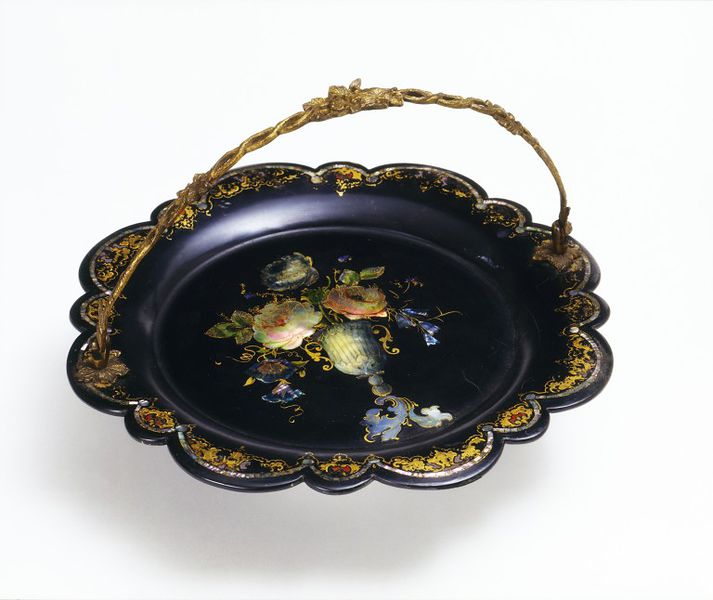