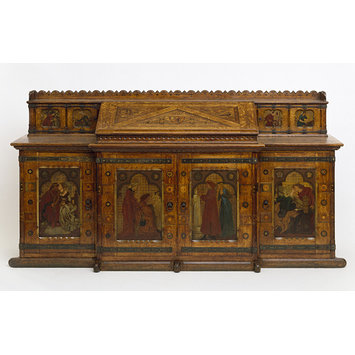 Object Type
J.P. Seddon (1827-1906) designed this architect's desk, including the metalwork and inlay, in 1861 for his own use. Seddon had the desk made at his father's cabinet-making firm. He also commissioned ten painted panels depicting the Fine and Applied Arts from Morris, Marshall, Faulkner & Co.

Design & Designing
Ford Madox Brown (1821-1893), who also designed the panel representing 'Architecture', suggested the overall theme. The 'Painting' and 'Sculpture' panels were by Edward Burne-Jones (1833-1898), while Dante Gabriel Rossetti (1828-1882) was responsible for 'Music' and 'Gardening'. The other small panels were by Val Prinsep (1838-1904). 'Pottery', 'Weaving', 'Ironwork' (showing William Morris (1834-1896) as a smith) and 'Glass Blowing' are unattributed. Morris designed the decorative background for each panel.

Subjects Depicted
The cabinet depicts scenes from the life of the Medieval King René of Anjou, a notable patron of the arts, as imagined in Sir Walter Scott's novel 'Anne of Geierstein' (Edinburgh, 1829).

Historical Associations
Seddon displayed the cabinet in the International Exhibition of 1862, where it received mixed reviews. The South Kensington Museum (now the V&A) recognised its importance and attempted unsuccessfully to purchase it from the exhibition. The Museum finally acquired it from Seddon's daughter in 1927.

The cabinet consists of a flat top, with central sloping desk, and a shelf running the full width of the top, above four cupboards, which sit on a plinth. The larger pair of cupboards in the centre project slightly forward and are flanked by narrower cupboards. All four cupboard doors have painted panels set in chamfered and gilded frames and six smaller painted panels with the same frames are set into the front and ends of the shelf running along the top of the cabinet.

According to J.P. Seddon, King René's Honeymoon Cabinet, London 1894, he designed the cabinet in 1861 as a desk for writing or drawing and to house his professional drawings in his office chambers at No. 6, Whitehall, London. He shared these premises with his partner, John Prichard, the firm being known as Prichard and Seddon, until the partnership ended in 1863.

Seddon designed the metalwork and the inlaid decoration, including the armorial bearings with an assumed punning motto, 'Non sono sed dono'. The figure of the lion rampant on the shield was drawn for Seddon by William Burges, his friend and fellow enthusiast for medieval Gothic designs.

The cabinet was made by the family cabinet-making firm, Thomas Seddon, and J.P. Seddon commissioned ten painted panels depicting fine and applied arts from his friend William Morris who had recently established a firm, Morris, Marshall, Faulkner & Co., with several partners. Morris designed the cusped arches for the larger panels showing the fine arts and decorative backgrounds for all the panels.

Ford Madox Brown, one of Morris's partners, suggested the theme for the larger panels which depict imaginary incidents in the honeymoon of King René of Anjou, inspired by Anne of Geierstein, (Edinburgh, 1829), a novel by Sir Walter Scott. Brown painted the Architecture panel, showing the king and his queen seated on a bench, with architectural drawings and tools. Edward Burne-Jones, another of Morris's partners, painted the two large central panels, Painting with the king seated and drawing, and Sculpture, showing the king carving a statue. Music, painted by D.G. Rossetti, also one of Morris's partners, shows the king kissing his queen who is seated at an organ.

The same four designs were used for four panels of stained glass, made by Morris, Marshall, Faulkner & Co. c. 1863 for The Hill, Witley, home of the artist Myles Birket Foster. These stained glass panels are also in the Museum (Museum Nos. Circ. 516 to Circ. 519-1963)

Of the smaller panels, Gardening was painted by Rossetti and Embroidery by Val. C. Prinsep. The artist or artists responsible for the other small panels, Pottery, Weaving, Ironwork (showing Morris as a blacksmith), and Glass Blowing, have not yet been identified.

The cabinet was part of Thomas Seddon's display of furniture designed by Prichard and Seddon at the London International Exhibition of 1862, Class XXX, Furniture, Paper-Hangings, and Decoration, No. 5815. Apparently the South Kensington Museum wished to buy the cabinet from J.P. Seddon but he preferred to keep it and gave it to his daughter, Mrs. Walter de Hoghton Birch, as a wedding present in 1897. The printed label for Belham & Co., makers of stained glass and mosaic workers, 155 Buckingham Palace Road, London, may refer to work on the cabinet commissioned by Seddon. The firm were at this address from 1889 and supplied stained glass for some of Seddon's churches.

In 1927 the Museum acquired the cabinet from Mrs Birch and it was placed on display in Room 25 near the Library stairs. In 1971 the cabinet was part of a display of furniture associated with Morris, Marshall, Faulkner & Co. in the Green Dining Room, originally decorated by the firm in 1866.

Exhibition of Pictures Ancient and Modern by Artists of the British and Continental Schools including a special selection from the works of Dante Gabriel Rossetti, London (New Gallery), 1898, cat. no.74.

British Galleries:
This cabinet is painted with imaginary scenes from the life of the Medieval King Ren‚ of Anjou in France. It was inspired by a novel by the popular writer Sir Walter Scott and decorated in the Medieval manner with painting. Artists including the design reformer William Morris painted the panels which represent different arts and crafts. [27/03/2003]

Shown at the London International Exhibition of 1862 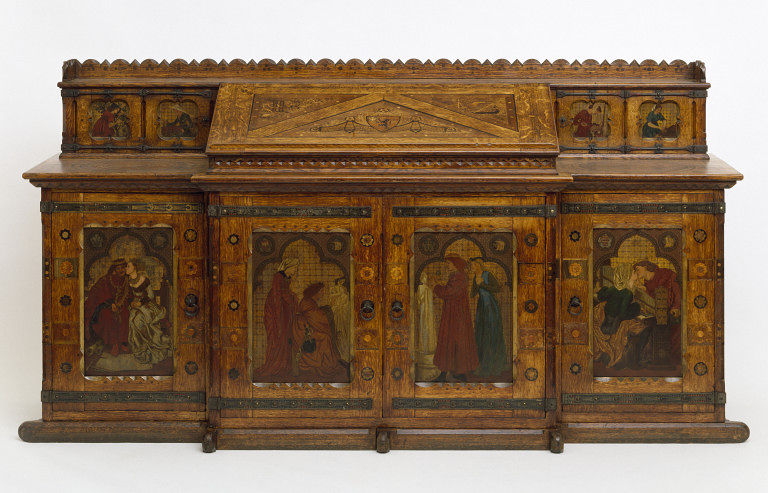