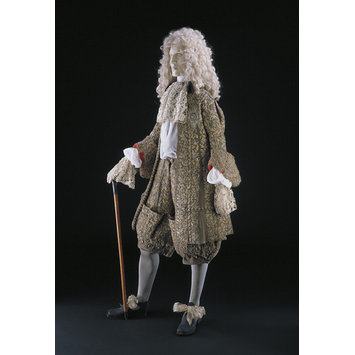 Object Type
These are two items of an ensemble that James, Duke of York, wore to his wedding in 1673. It represents a new fashion in men's wear that had been introduced several years before by the Duke's older brother, Charles II. The style came from France where it derived from the justaucorps, a version of military coat made fashionable by Louis XIV.

People
The Duke of York married for a second time in 1673. His second wife was Mary of Modena (1658-1718), whom he had married by proxy in Italy in September. The marriage contract was confirmed in November upon Mary's arrival at Dover. The second ceremony was a subdued affair, as Mary was a Roman Catholic and the union was unpopular in England and at court. Only the Duke's closest supporters attended and there were none of the public ceremonies or processions normally associated with royal weddings. The Duke of York wore this coat and breeches at Dover.

Design & Designing
Although symmetrical, the design of stylised flowers and leaves is not repeating. This suggests that it was drawn freehand and not transferred from a printed pattern. Couching attaches the silver and silver-gilt threads to the surface of the fabric. Tiny strips of parchment wrapped in metal thread give the embroidery three-dimensional effect.

Coat and breeches of brown (originally a dark purple-brown) woollen broadcloth, interlined with linen and embroidered with silver and silver-gilt filé, and parchment wrapped in silver and silver-gilt strip in a pattern lilies and honeysuckle. The coat is lined with crimson silk taffeta. It has a round neckline bound with a narrow strip of the broadcloth, straight front edges, curving 2-piece sleeves ending between elbow and wrist, and narrow skirts below the waist. Each sleeve turns back to form a long narrow cuff with curved ends, revealing the crimson lining which is embroidered with silver purl, silver and silver-gilt filé in a pattern of large scrolls and leaves. There is an opening in each side seam at hip level and a horizontal pocket low on each front, fastening with 10 worked buttonholes and 10 buttons with a wooden core covered with silver and silver-gilt filé. There are 46 buttonholes on the left front, the bottom 15 uncut; there are 48 buttons on the right front. The centre back seam is open below the hip with 16 uncut button holes on the left back and 16 buttons on the right. A Garter Star is embroidered on the left chest with silver filé and applied blue silk taffeta.

The breeches are made of the same broadcloth and embroidered in the same threads and pattern. They are full, gathered at the waist and tapering to just below the knee with a 11¾-inch (29.7 cm) deep band above the knee, faced with crimson silk. There is a pocket on each side with pocket bags of chamois lined with silk; the left side has 2 pocket bags, the right side one. The breeches fasten with a large (replacement) button and buttonhole in the waistband, a button stand on the left with 5 worked buttonholes and 5 silver/silver-gilt covered buttons on the right. There are 2 metal hooks sewn to the back of the waistband.

The breeches were probably originally lined with linen, now missing.

Acquired by Sir Edward Carteret (died in 1699) of Jersey, who attended the wedding ceremony in Dover.

British Galleries:
The heavy silver embroidery on this suit would have sparkled in both daylight and candle-light. The waistcoat, now lost, was probably of a contrasting rich fabric and colour. The fashion of a three-piece ensemble (coat, breeches and waistcoat, instead of doublet and breeches), was introduced from France in the 1660s, as was the full wig shown in the mezzotint portrait of James of about 1676 (see photograph). [27/03/2003] 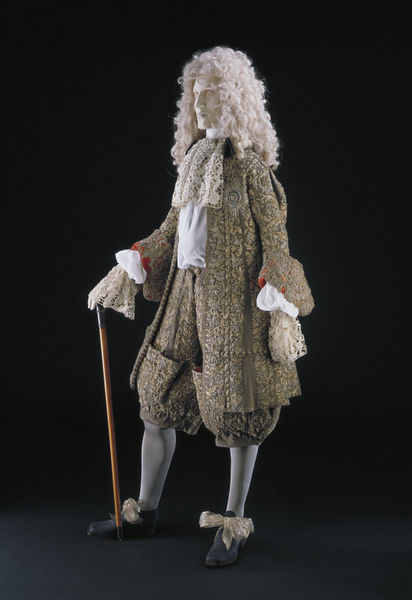