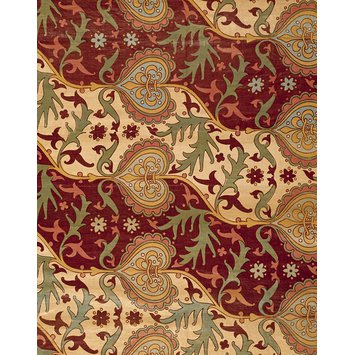 This curtain was made from a furnishing textile. Only two examples of this printed cotton are known. The architect, writer and designer A.W.N. Pugin (1812-1852) discussed the design of this textile in two letters to the decorator J.G. Crace (1809-1889), of the firm Frederick Crace & Son, in January and February 1850, as it can be identified from sketches in these letters. According to his 1850 accounts Pugin charged Crace œ2 2s 0d for the design, the original of which is in the Museum's collection.

Pugin is known to have designed only one other printed cotton pattern, as he preferred to use woven furnishings in his interiors. The design was registered by Crace with the Public Record Office on 28 May 1850 (no. 69572). A textile of this pattern was probably exhibited in the Medieval Court of the 1851 Great Exhibition. It is not known how long Crace continued to sell this design, and this curtain may be a later version. A version of this cotton, with the pattern in reverse, was used in the redecoration of Gawthorpe Hall, Burnley, Lancashire, a scheme worked on by Pugin between 1847 and 1852. A sample of the Gawthorpe cotton is also in the Museum's collection.

Curtain of block-printed and glazed cotton. Three seamed panels, and the central panel measures 25 inches (63.5 cms) and is possibly the finished width. The design shows vertically meandering stripes of maroon and white separated by formalised inverted heart-shaped motifs and stems with trailing leaves and scattered flowerheads. Each ogee motif is filled with a fleur-de-lis motif. The pattern is printed in yellow, green, pale blue and maroon onto a maroon and white ground. The curtain has been reclined and re-headed with rufflette tape, attached by machine, although seams and hem are hand sewn. It is likely that the green, red and cream trimming is original.

The pattern was designed by AWN Pugin (born in London, 1812, died in Ramsgate, Kent, 1852) possibly printed by the firm of Thomas Clarkson of Bannister Hall, Lancashire for Frederick Crace & Son, London. A dated pencil and purple wash drawing for this is in the Museum (D.767-1908).

In Sandra Wedgwood's catalogue, it was noted that Pugin discussed the pattern in letters to Crace in January and February 1850, 'where it can be identified from sketches in the text (RIBAL Crace MSS PUG 7/5 and 6)'. Sandra Wedgwood also believed that the textile may have been displayed in the Medieval Court at the Great Exhibition of 1851. Pugin charged Crace £2.2.0d for the design (RIBAL Crace MSS PUG 13/8). Registered by F. Crace & Son with the Public Record Office on 28 May 1850 (No. 69572).

The textiles was used at Gawthorpe Hall, Burnley, Lancashire, a 17th century house in which Barry and Pugin both had a hand in redecorating between 1847 and 1852. A small piece of the same cotton from the house, but printed in reverse, is now in the collection (T.16-1978), and may suggest that one of the Museum's sample (the Gawthorpe example or this curtain) was printed later by engraved roller, the engraver having coped a printed cotton sample.

The sample in the PRO is the same colourway and in the same direction as T.62.1986.

The bright colouring and form of textile is surprising both for the designer and his times. Pugin's textiles were usually confined to two colours and only one other printed cotton by him is known - printed roller blind for the Palace of Westminster, see T.15-1980. He preferred to design for the loom - rich silks and heavy woollen fabrics. Before the mid-19th century, printed cottons were not considered suitable for main reception rooms in houses but as secondary and serviceable furnishings for summer curtaining or loose covers. A version of the cotton was used in the re-decoration of Gawthorpe Hall.

Curtain of block-printed and glazed cotton, designed by AWN Pugin in 1850, made by Frederick Crace & Son in 1851, London, and possibly printed at Bannister Hall, Lancashire.

British Galleries:
Although A.W.N. Pugin's textiles were usually confined to two colours, here he used as many as five. The bright colouring and strong diagonal lines emphasise the flat, formalised nature of the pattern. [27/03/2003]

This pattern was probably exhibited in the Medieval Court of the Great Exhibition of 1851. 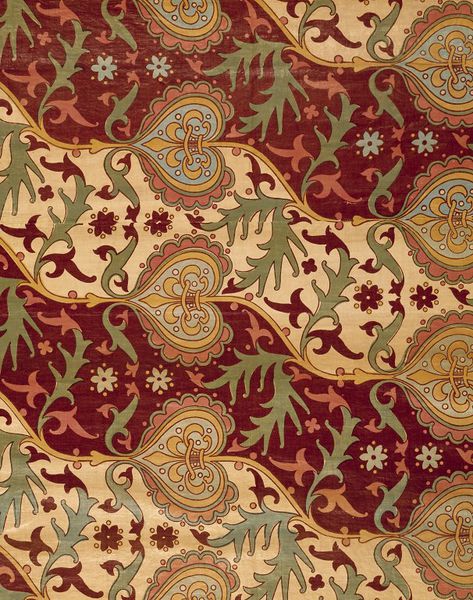