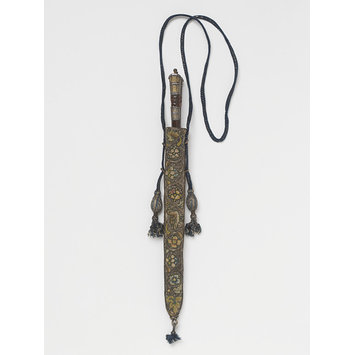 Object Type
In the 17th century cutlery used at table was often designed to be portable, since knives for eating were also used for other purposes and carried on the person. This presentation set of two knives in a carrying sheath was probably given as a wedding gift to a bride. Knives were used for cutting food and carrying it to the mouth, with the fingers. The use of forks became widespread in England only after 1660, following the example set by Charles II (ruled 1660-1685). The formal place setting of knife, fork and spoon was not established in England until about 1700.

Materials & Making
The hafts (handles) of the knives have been set with pieces of amber. Before the 18th century most knife hafts were made of organic materials, including ivory, bone and shell. Amber (fossilised resin) was a rare and precious material, found mainly on the Baltic coast of Prussia and traded from Germany. It was traditionally believed to be an effective amulet against disease.

Manufacture
Cutlery manufacture involved a number of specialists: the blademaker, grinder, hafter (the person who made the handle), sheather (the maker of the sheath in which the knife was carried) and the furbisher or cutler, who assembled the parts, forging the blade, and sold the finished items. The London Cutlers Company, set up in 1415, regulated the trade until the 18th century. It obliged cutlers to mark their wares with their personal devices.

Pair of steel knives with the handles damascened in gold and silver and set with amber. The knives have a thistle mark. The leather case is covered with linen, embroidered in silk and silver-gilt threads in tent and double-plait stitches. The embroidery design includes a bird, rose, pansy, grapes and vine leaf. The case has a hanging string of braided blue silk and silver thread.

The knives were made in England by John or Joseph Jencks. The embroidery design is identical to that on a purse and pincushion, T.52-1954, and all three may have been made as a set. Bequeathed by Sir Frederick Richmond, Bart, in 1954, along with a collection of 17th century embroidery and accessories.

Pair of steel knives with the handles damascened in gold and silver, made by John Jencks, with a linen case embroidered in metal threads, England, 1600-1625

British Galleries:
Guests were generally expected to take their own knives to dinners or feasts. Cutlery was also a traditional gift at many special occasions. The custom of giving brides a pair of decorated knives had started in the Middle Ages and continued into the 18th century. Wedding knives often came in pretty embroidered cases and the bride would hang them from her waist. [27/03/2003] 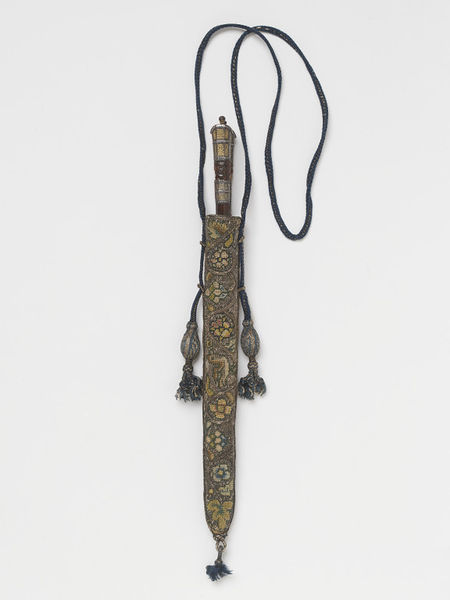