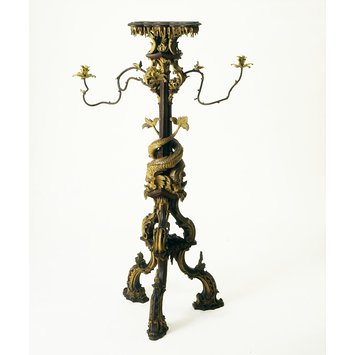 Object Type
This is one of a set of four stands made to hold candelabra to light a room. The lively design with imagery from nature is typical of the Rococo style in Britain in the 1760s.

Design & Designing
We do not know for sure who designed or made this stand, but it is very similar to a published design by the carver Thomas Johnson. Dolphins were a popular feature at the time. Johnson might have based his design on an engraving of a candlestand by François Cuvilliés (1695-1768), the Flanders-born designer who for many years worked for the Bavarian Court in Munich. Thomas Chippendale later used a similar design in the third edition of his book The Gentleman and Cabinet Maker's Director of 1762.

Place
George, 1st Baron Lyttelton (1709-1793) bought the candlestands for Hagley Hall, Worcestershire, his country house built between 1754 and 1760. The stand was one of a set of four which stood either side of pier tables in the gallery, a long room with windows overlooking the park. The other furniture in that room - the girandoles, or wall-lights, and the mirror- and picture-frames - were also carved with rustic and natural imagery.

Materials & Making
The stand is made of carved pine, painted to match the frames in the room in mahogany brown and a contrasting grey-white. The branches are iron, with candlestick nozzles of gilt brass.

Carved pine, partly stained brown in imitation of mahogany, partly painted grey-white with branches of iron and candlestick nozzles of gilt brass. The rectangular lobed top is painted black, and fringed with stalactites. It is supported by a cluster of rococo openwork scrolls, from which spring one single branch and one branching branch, all of iron, in a naturalistic style, terminating in three gilt brass nozzles. The irregular shaft consists of a column entwined by a pair of dolphins, mounted on a triple openwork substructure of fronded rococo scrolls, set on a triangular base of piled rockwork. The tripod feet are parti-coloured grey, white and brown, and enriched with stalactites and stalagmites.

Carved and painted pine, with iron branches and gilt-brass nozzles

Made after a design by Thomas Johnson (born in London, 1714, died there in about 1778). The candlestand was commissioned by George, 1st Lord Lyttelton (1709-73) for Hagley Hall, Worcestershire, his Palladian mansion built between 1754 and 1760. Hagley Hall's severely restrained Palladian exterior bore little relation to the interiors which were decorated with Rococo plasterwork and fashionably furnished in a variety of styles. The Gallery was supplied with candlestands, girandoles and pier glasses elaborately carved with rustic and natural imagery. This candlestand is one of a set of four supplied to flank the pier tables in the gallery. They remained at Hagley until 1950 when the candlestands and girandoles were sold at Sotheby's to pay for death duties. One candlestand was bought by Temple Newsam House, Leeds; the other two were bought by the Philadelphia Museum of Art, USA, together with the girandoles.

Historical significance: With the lightness and delicacy of its outline, its asymmetry and naturalistic motifs, the stand represents the Rococo style of the mid 18th century at its most exuberant.
The overall form of the stand relates so clsoely to a design by Thomas Johnson (plate 13 in a book of designs without a title page, 1758, V&A Museum No. E.3731-1903) that it can be safely attributed to his workshop at 'The Golden Boy', in Grafton Street, Soho, London.

Johnson drew freely on the work of other designers for his motifs: the dolphins may derive from an engraving of a candlestand by François Cuvilliés (1695-1768). In turn, Thomas Chippendale appears to have adapted Johnson's design in the third edition of 'The Gentleman and Cabinet Maker's Director', 1762, PL.CXLV.

Candlestands were used to support candelabra.

Candlestand of carved and painted pine of irregular form, with naturalistic decoration including dolphins and stalactites.Made for Hagley Hall. British (London), 1756-60.

Related to a design published by Thomas Johnson.
From Hagley Park, Worcestershire.
[John Hardy] [1976]
British Galleries:
The full range of Rococo motifs is seen here, including naturalistically carved branches and dolphins. They are supported on a base of scrolls fringed with the shell-like ornament known as 'rocaille' and dripping water. The carver Thomas Johnson published a similar design in 1758. [27/03/2003]

On stylistic grounds, as it matches a published design by Johnson. First linked to Johnson's design in Dictionary of English Furniture, by Macquoid and Edwards, 1924 (see textual references). Prior to that attributed to Chippendale.

Attribution note: One of a set of four candlestands supplied for the Gallery. Other furniture for the house was possibly part of the same commission, for example the girandoles, mirror and picture frames and the mantelpiece in the Gallery.
Reason For Production: commission 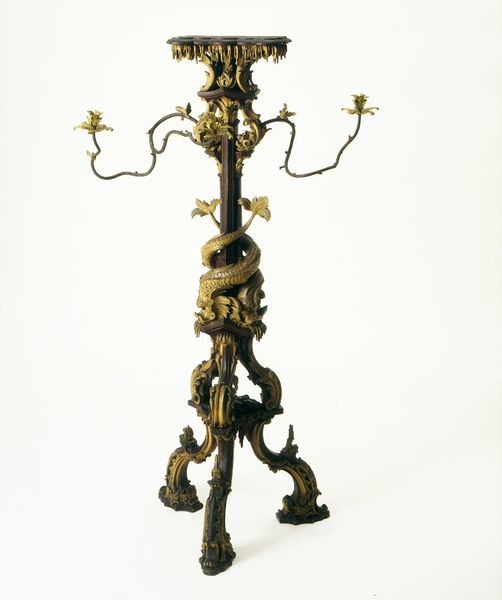