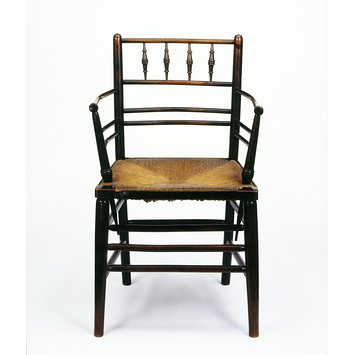 Object Type
This chair was named after a country chair found in Sussex, which inspired the design with the turned frame and rush seat. Similar types of chairs, with imitation bamboo frames and rush seats, were fashionable between 1790 and 1820.

Ownership & Use
William Morris and his wife, Jane, used Sussex chairs in their first home, Red House, Bexleyheath, Kent, from 1860 and subsequently in their London house, Kelmscott House, Hammersmith. Morris's great friend, the artist Edward Burne-Jones (1833-1898) had Sussex armchairs in his studio, as did the sculptor, Alfred Gilbert (1854-1934). Robert Edis recommended this chair as 'excellent, comfortable and artistic' in his influential book, 'Decoration and Furnishing of Town Houses in 1881'. Examples from the Sussex range were supplied for students' rooms at Newnham College, Cambridge, and for galleries in the Fitzwilliam Museum, Cambridge.

Trading
The Sussex range of modest seat furniture, which started with this armchair and a single chair, expanded as a result of the commercial success of the design. Eventually it included corner chairs, children's chairs, and settles. A whole page was devoted to the Sussex range in the firm's catalogue, about 1912, where the armchair was priced at 9s 9d (49p). Other firms, particularly Liberty & Co. and Heals, produced their own versions of this popular design.

Armchair, ebonised beech with turned ornament and a rush seat.

Ebonised beech, with a rush seat

Armchair, ebonised beech, with turned ornament and a rush seat. Britain (London), 1870-1890. Probably designed by Philip Webb and made by Morris & Co.

Sold by Morris & Co. in large numbers from about 1869 until the 1920s as their 'Sussex Chair'. the design was copied from a vernacular version of a late Georgian armchair discovered in Sussex. [Unknown]
British Galleries:
The 'Sussex' chair was part of a range of modest furnishings available from the Morris shop. It was available in various styles in black or red. Like other furniture made by the firm in their early years, the shape was based on early country designs. It sold in large numbers and became the firm's most familiar product. [27/03/2003] 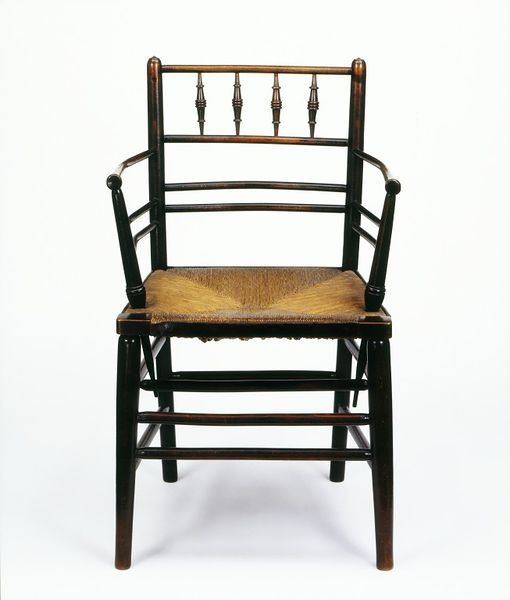