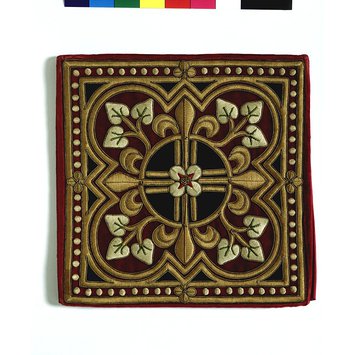 This burse is part of a set of church furnishings designed by A.W.N. Pugin for use in St Augustine's Church, built in the grounds of Pugin's own house in Ramsgate, Kent. The burse shows embroidery of a very high standard. Pugin's ecclesiastical work was organised by John Hardman & Co., the Birmingham ecclesiastical suppliers, with whom he is closely associated.

Pugin's embroidery was carried out in Hardman's own embroidery workshops, run by Mrs Powell, John Hardman's sister and the wife of his partner, and by Lonsdale & Tyler of Covent Garden, who produced all forms of uniform and regalia work. Mrs Powell set up her business in 1842 to deal with the increasing interest in vestments and church decoration arising from Pugin's work. She also employed another Birmingham firm run by the Brown sisters (Lucy and Winifred), whom she took into partnership in 1852. The very high professional standard of padded embroidery and goldwork in this example suggests it was worked in the workshops of Lonsdale & Tyler.

The burse is from one of the sets of vestments designed by A.W.N. Pugin for his own use in St Augustine's, the church he built in the ground of his house in Ramsgate, Kent.

Worked on a silk velvet ground the decoration in silks and silver gilt shows workmanship of a very high standard. It is known that Pugin's ecclesiastical work was organised by Hardman, the Birmingham's ecclesiastical suppliers with whom he is closely associated. Hardman employed a number of other manufacturers to carry out the various work needed for each commission. In the case of embroidery, two different workshops were used - Lonsdale and Tyler, and Mrs Powell, Hardman's sister and wife of his partner. Mrs Powell set up her business in 1842 to deal with the ever increasing commissions for vestments and church decoration arising from Pugin's work. In the early years, Mrs Powell also employed another Birmingham firm run by the Brown sisters (Lucy and Winifred), whom she took into partnership in 1852. The very high professional standard of padded embroidery and goldwork in this example suggests it was worked in the workshops of Lonsdale & Tyler. They were responsible for the decoration on vestments Pugin designed in 1837 for St Mary's, Oscott, and in 1841 for St Chad's Cathedral, both in Birmingham.

It has not been possible to discover a specific date for the manufacture of the vestments at St Augustine's. Pugin's Ramsgate house, The Grange, was designed by him and built between 1843 and 1844. The same year, the building of St Augustine's church began in the grounds of his house. Progress depended on Pugin's own earnings but it was substantially completed in 1850. The furnishings also were added as finances allowed, but all was not completed before Pugin's death in 1851. Services did take place from 1850. With Pugin's insistence on the accuracy of ecclesiastical procedure and decoration some vestments would have been in the church at this time.

Burse of embroidered silk velvet with velvet appliqué, designed by A.W.N. Pugin, probably made by Lonsdale and Tyler, London, 1848-1850.

British Galleries:
A burse is the case for the square of white linen that the chalice and the paten are placed upon during the Catholic mass. A.W.N. Pugin designed this burse for his own church, St. Augustine, Ramsgate. The professional workshop that embroidered this burse also produced military uniforms, using the same elaborate, raised goldwork. [27/03/2003]

Made for St Augustine's Abbey, Ramsgate. 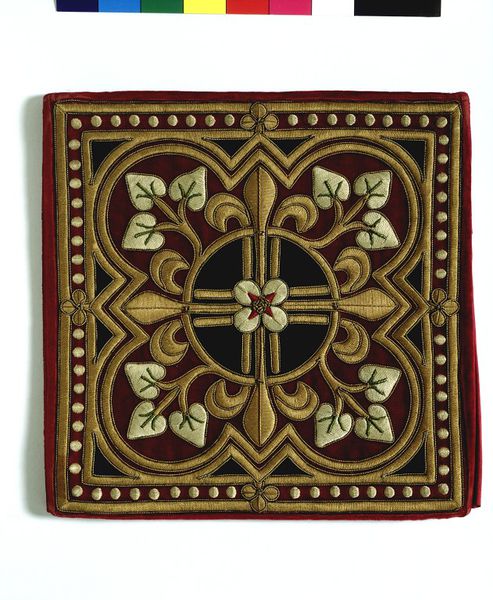