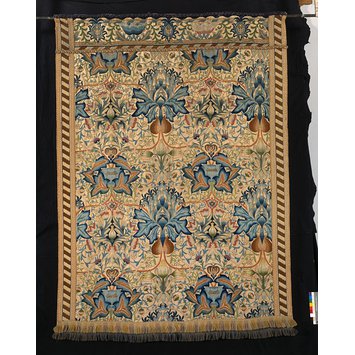 This is one panel from a set of embroideries of the same repeating pattern. The set was designed and worked to hang around the walls of the drawing room at Smeaton Manor, Northallerton, in North Yorkshire. The embroiderer, Mrs Ada Phoebe Godman, who lived at Smeaton Manor, was the daughter of Isaac Lowthian Bell, a patron of William Morris. She commissioned Morris to produce a design for her to embroider, and her diary describes its delivery on 31 August 1877. An existing drawing of Mrs Godman shows her still completing the embroideries in 1900.

Other examples are in the collections of the Fitzwilliam Museum, Cambridge, and the William Morris Gallery, Walthamstow, London. The design of repeating artichokes has a traditional structure and shows Morris's preoccupation in the 1870s and 1880s with Middle Eastern and early Italian silks and velvets.

The design did not remain exclusive to this client. A pair of hangings from the same design were worked in silks by Mrs Margaret Beale and her daughters for their country home, Standen, in East Sussex. The original design, inscribed 'Mrs Godman. Design for embroidered hanging (artichoke design)', was acquired by the V&A in 1898 before the Smeaton hangings were finished (museum no. 65-1898).

Embroidered hanging panel, showing a repeating, stylised design of blue and brown artichoke heads and leaves surrounded by flowering buds and leaves in various shades of pink, green, cream, orange, brown and yellow. The deign is not placed symmetrically on the hanging. Applied borders down the side of the panel show diagonal stripes in brown and cream floated wool, edged in cream with narrow orange stripes. Two fringes in blocks of lime, mauve, pink, pale blue and dark blue respectively, cover at the bottom edge, areas of unfaded embroidery and some original drawing. The fringe is badly faded.
The embroidery is worked in crewel wools on linen in long and short, stem and satin stitch and french knots, and is backed with natural coloured hessian. Two strips of twisted linen and silk in royal blue and peach, lime, pale blue and white decorate the top border of the panel which shows a repeating design of artichoke and tulip-like flowers with interlacing foliage.

Embroidered in crewel wools on linen in long and short, stem, satin stitches and French knots, with woven woollen braid and fringing

Designed for the walls of the drawing room of Smeaton Manor, Northallerton, North Yorkshire, a house designed by Philip Webb (born in Oxford, 1831, died in Worth, West Sussex, 1915)Designed by William Morris (born in London, 1834, died there in 1896) and embroidered for her home by Mrs Ada Phoebe Godman

British Galleries:
Embroidery was the first textile technique that Morris adopted for commercial use. He encouraged the use of fine needlework at a time when coarse canvas work kits were universally popular. Morris & Co.'s designs ranged from small cushion covers that could be made at home, to large, specially commissioned hangings, such as this example. [27/03/2003] 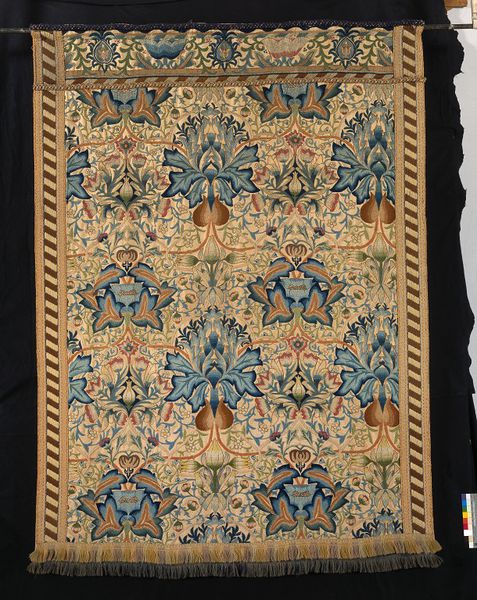