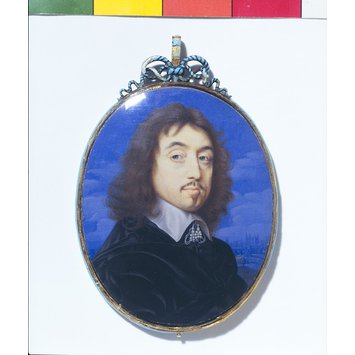 Object Type
The term 'miniature' describes the watercolour technique in which this portrait has been painted, rather than the size of the painting. Unusually this miniature is still in a 17th-century blue enamelled gold locket; many such miniatures have lost their original frames.

People
This miniature closely resembles the subject of an etching from 1653 by the Bohemian Wenceslaus Hollar, which is said to depict Sir John Wildman. Wildman was notorious as one of those involved in trying and condemning to death Charles I. However, the Hollar print was not described as showing Wildman until almost 100 years after Wildman's death. No other portraits of Wildman are known, so the description must remain doubtful.

Head and shoulders oval miniature portrait of a man, turned to right and looking to left, his hair long and wearing a dark tunic with a white collar. In the right background is a view of a city - possibly London and the Tower of London. Features deftly and directly hatched in brown and sanguine, with some blue-grey shadow, on a thick, pale carnation ground; hair in brown wash, lined with darker colour and with gouache heightening; collar in white on pale grey wash, costume in black with lights in grey; background, a landscape washed and hatched in gouache; on vellum put down on a leaf from a table- book.

Frame: Seventeenth-century enamelled gold locket with a convex back covered with opaque pale blue enamel within a gold border; the inside partly counter-enamelled; the sides rounded and enamelled in the same pale blue, with the gold drawn up into a bezel which holds the convex glass; the hanger of inverted D-section, enamelled (much missing), and with a simulated knotted cord in pale blue and black enamel wound round its shank, making two symmetrical bows, the tapering ends passing through the bows and over the case in three undulations. A severe damage to the enamel at the base on the back and numerous losses. The front cover missing and points of attachment damaged or filed off.

Water-colour on vellum, put down on a leaf from a table- book

The identification as John Wildman, the Leveller who rose to prominence in 1647 when he opposed Cromwell’s negotiations with Charles I, is based on its direct relationship with an engraving by Wenceslaus Hollar, dated 1653 (George Vertue, Hollar, 1745, p.72; Gustav Parthey, Hollar, 1853, p.385, no.1697). The early impressions bear no name, but from the second half of the 18th century the engraving became known as a portrait of Wildman (see the Rev. James Granger, Biographical History of England, 1774, Supplement p.296; 1824, illustrated ed. Vol. II, part III, p.207).

Provenance: Miss Armorel Carey in 1946; sold by private treaty to the Museum, February 1962.

British Galleries:
This miniature may show Sir John Wildman (possibly 1621-1693). In 1647 he campaigned as a spokesman for the Parliamentary soldiers and the Levellers, a radical republican group. From 1650 to 1655 he made a comfortable fortune through the sale of Royalist properties. [27/03/2003] 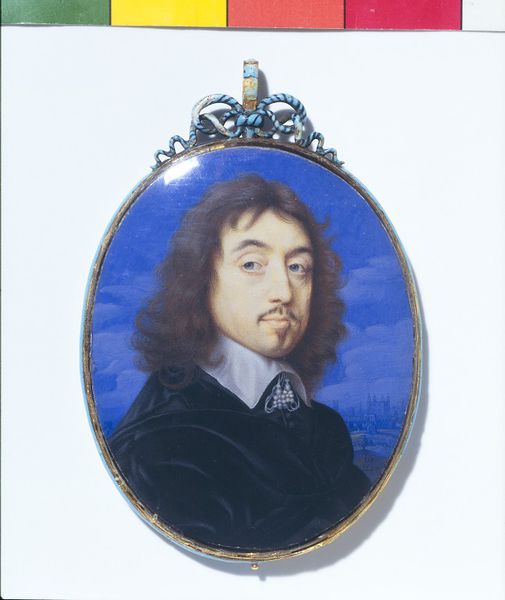