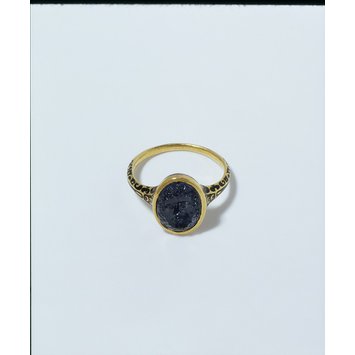 Object Type
The shoulders and sides of the bezel (head) of this ring are decorated with scrolls on a black enamel ground. The very fine sapphire intaglio (the design engraved into the stone) is Graeco-Roman, dating from the 1st century AD.

The intaglio was probably mounted into the ring in about 1590-1600. It then appears to have entered the collection of the Gonzaga dukes of Mantua. The ducal art collections became the target of dealers, including Daniel Nys, who in 1627 sold to Charles I paintings by, among others, Titian, Raphael, Correggio and Giulio Romano. In 1637, when Charles declined to buy from Nys the Gonzaga gems, Thomas, 14th Earl of Arundel agreed to purchase them through his agent William Petty. Arundel was the most dedicated English collector of his generation, who built a library of 3000 books, exchanged engraved gems with Rubens, and played a role in bringing Van Dyck to London, as well as making collections of antiquities, Renaissance drawings and paintings on the most extensive scale.

The range, antiquity and splendour of the objects Thomas Howard, Earl of Arundel (1585-1646) acquired put him on a par with great European collectors. As well as paintings and drawings of the greatest importance, he collected works of the classical period. These included cameos and intaglios. His principal agent was the tireless William Petty (possibly born in 1585, died 1639), who in 1638 purchased for Arundel the gem collection of the Flemish dealer Daniel Nys in Italy.


The Arundel Collection gems passed by descent to Charles Spencer, 3rd Duke of Marlborough (1706-1758, himself a great collector of engraved gems.The Marlborough Collection was later sold at Christie's auction house on 28 June 1875.

Subjects Depicted
The sapphire is engraved with the head of Medusa. In Greek mythology she was one of three sisters, the Gorgons, whose terrifying appearance turned those who saw them into stone. She was beheaded by the legendary hero Perseus.

Gold enamelled in black, set with a sapphire intaglio of the Medusa

Probably collection of the Gonzaga dukes of Mantua. Purchased by William Petty from Daniel Nys, for Thomas, 14th Earl of Arundel (1585-1646). By descent to the widow of Henry Howard, brother of Henry, 6th Duke of Norfolk. Sold to Henry, Earl of Peterborough. Bequeathed by Lady Mary Mordaunt, his daughter, to her second husband, Sir John Germain. Given by his widow, Lady Elizabeth Germain, to Hon. Mary Beauclerk on the latter’s marriage to Lord Charles Spencer, from whom the collection passed to George, 4th Duke of Marlborough (1739-1817). Sold by John, 7th Duke of Marlborough to David Bromilow, 1875. Christie’s, 26-29 June 1899, lot 98 (Whelan; £105). Salting Collection.

British Galleries:
Thomas Howard, Earl of Arundel (1585-1646), who owned this ring, was one of the first Englishmen to collect classical sculpture and gems. He travelled widely in Europe and was famous as an antiquarian and art connoisseur. This sapphire is carved with the head of Medusa, the mythological monster whose gaze turned men to stone. [27/03/2003]
Treasures of the Royal Courts: Tudors, Stuarts and the Russian Tsars label text:

The classical sapphire intaglio is engraved with the head of the gorgon Medusa. Set into a ring for the Gonzagas, dukes of Mantua in around 1600, it was
later acquired by Thomas Howard, 14th Earl of Arundel. He was a pre-eminent collector of antiquities, Renaissance drawings and paintings. 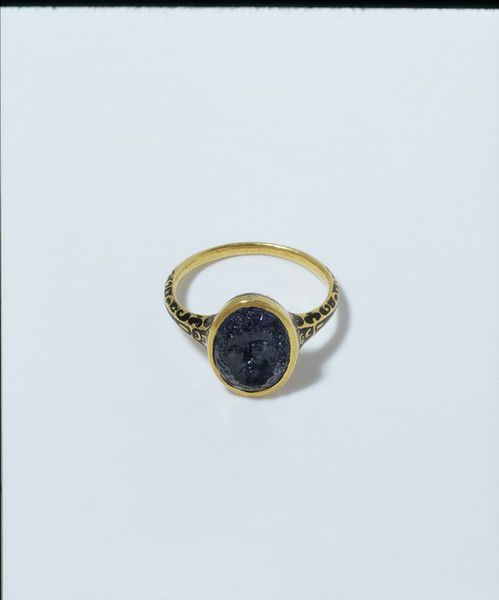