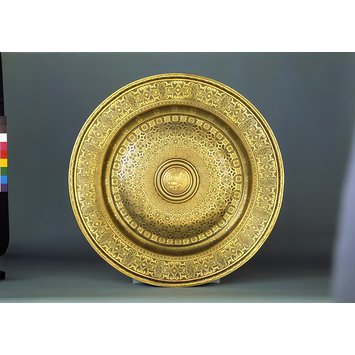 Object Type
This elaborately decorated dish is a good example of the famous author, designer and collector William Beckford's interest in revivalist styles. The interlaced strapwork design radiating around the central well is likely inspired by Venetian-Saracenic work, including as it does the Islamic asymmetrical knot motif. William Beckford (1760-1844) was fascinated by the Islamic world. He owned a large number of pieces described as being 'Persian', which were probably from Islamic Spain or Venice. The strapwork on the border of this piece, however, appears entirely European in style and may be based on a late 16th- or early 17th-century print source.

Ownership & Design
As a reflection of William Beckford's obsession with his lineage, heraldic elements formed an important part of the decoration of many of the pieces in his collection. The Douglas mullet, the Latimer cross and the Beckford martlet interwoven in the strapwork pattern are engraved on the dish, while the Hamilton cinquefoil decorates the inner border. Heraldic motifs adorn much of Beckford's silver and formed an important part of the interior decoration of his home, Fonthill Abbey, Wiltshire.

Sideboard dish, silver-gilt, in the centre a detachable coat of arms with a cut silhouette on the backplate; bearing the duty mark, lion passant and maker's mark of William Burwash. The screw has a cast head bearing a cinquefoil, ermine for Hamilton; it is marked only with the lion passant. The arms on the plate are, quarterly; 1) Beckford, 2) Hamilton, 3)Sir James Douglas of Dalkeith, 4) Beckford.

Surrounding the arms, forming part of the dish, a convex scale pattern wreath based on the pine motif; a plain step follows to the central depression, which is slightly convex. On a matted ground, a frieze of arched motifs knotted at the terminals, based on Venetian Saracenic ornament. The rest of the depression filled with chased and engraved interlaced strapwork on a matted ground, apparently derived from late 16th and early 17th century sources, radiating from the centre and increasing in scale. Worked into the pattern the Douglas mullets (stars), the cross flory in allusion to Beckford's descent from William 1st Lord Latimer and the martlets of Beckford. The other decorative motifs inserted, including Islamic knots are not armorial. Connecting the depression with the inner border is a frieze of Hamilton cinquefoils, ermine on a hatched ground. A small band of scrolls and pellets on a matted ground between two plain fillets adjoins a frieze of German arabesques, also on a matted ground. On the outer rim, on a hatched ground, shaped scrolls based on the egg and dart pattern.

On the depressed side at the back are engraved the two Beckford crests; one, the family crest, a heron's head erased, gorged witha collar and in the beak, a fish with the motto DE DIEU TOUT. The other adopted in 1798, representing the Hamilton oak tree differenced with a cross flory and the Hamilton motto, THROUGH.

Inscribed: This plate which came originally / from the Hamilton Palace collection / was presented / by the Congregation of St. John's / as part of their memorial to / George Frederick Terry / Rector of the Church / 1909-1919.

British Galleries:
Beckford attempted to exaggerate the grandeur of his family history by commissioning imitations of historic objects, richly decorated with his own heraldic devices. This dish of Renaissance form is engraved with the devices of the Beckford, Hamilton and Douglas families. [27/03/2003] 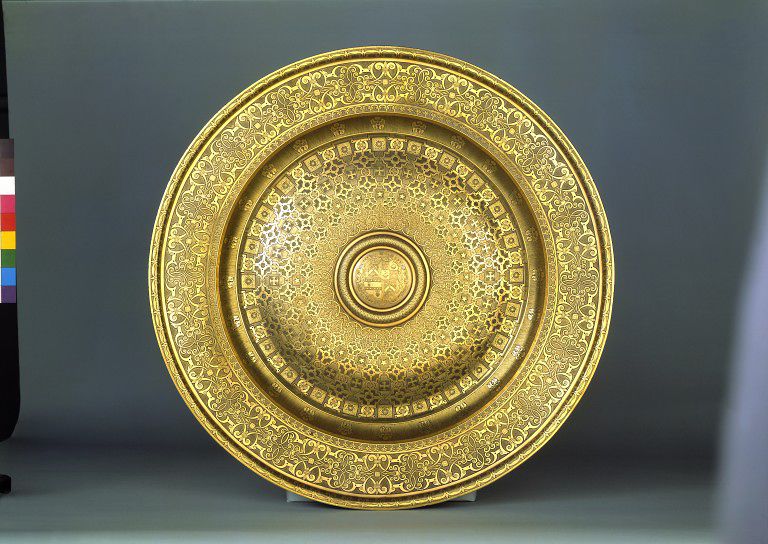