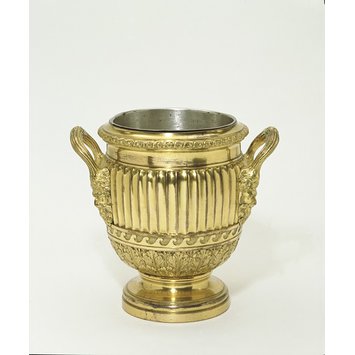 Object Type
Matthew Boultons' involvement in the ormolu trade was not a financial success and he was only producing ormolu from 1768-1782. It was suggested to Boulton as early as 1769 that he might consider manufacturing ice pails at the Soho Manufactory, Birmingham, as they were at the time very fashionable in France. He certainly took up the suggestion as a number of 'ice pails in ormolu, with plated linings' were delivered to the Duchess of Ancaster in April 1773.

Design
There are drawings for ice-pails in the Boulton and Fothergill pattern books which were intended for production either in ormolu or silver. Boulton seems to have based his designs on those of the prominent London silversmith Charles Frederick Kandler who was producing ice pails in silver.

People
Boulton sold ice pails to a number of wealthy clients including the Earl of Ashburnham, the Countess of Derby and the Earl of Beauchamp. Vase shaped ice-pails were very fashionable in France and French prototypes are likely to be the original source for this ormolu version.

The ice pail is formed as a vase rising from a simply moulded, circular foot. The lower section of the vase is cast and chased with acanthus above which is a frieze of Vitruvian scrollwork bordered above and below by a plain band. The body of the vase is fluted. The concave neck is decorated around the upper border with rosettes. The handles at either side are compromised of a reeded loop mounted on the tops of bearded mens' heads.

Probably manufactured by Matthew Boulton (born in Birmingham,1728, died there in 1809) at the Soho factory, Birmingham.

The production of ormolu at Soho was confined to a short period between 1768 and 1782 and ice pails were amongst the first items that were suggested to Boulton as possible manufactures. The earliest were ordered by the Duchess of Ancaster in April, 1773 and the manufacture continued until at least, 1778. In that year, a sale of Boulton's ormolu was held at Messrs Christie and Ansell. Lot 44 was catalogued as "A pint ice pail in ormolu richly gilt, chased and lined with silver," and was reserved at ten guineas. The following lot was a similar pail for a quart bottle, reserved at thirteen guineas. Both failed to sell and are probably those listed in the inventory of Boulton's stock taken in 1782.

A drawing for an almost identical ice pail appears in the Boulton pattern books which are preserved in the Birmingham Public Reference Library.

According to the vendor, this ice pail was acquired at a sale in Glasgow of Sir Patrick Thomas who was apparently descended from Matthew Boulton.

British Galleries:
Boulton made luxury silver and ormolu products to promote the firm's reputation for high quality metalwork and attract wealthy patronage. Neither the silver nor ormolu trade was a financial success and ormolu was only made by the firm between 1768 and 1782. The design of this vase-shaped ice pail may well have a French source. [27/03/2003] 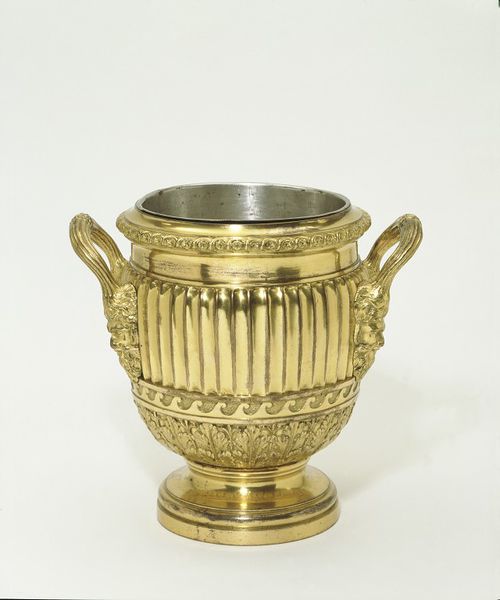