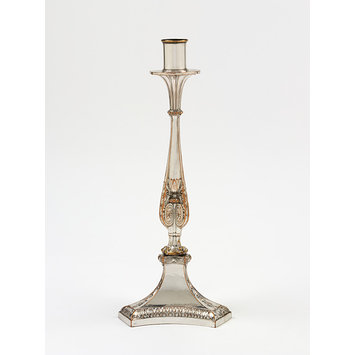 Object Type
This candlestick, one of a pair (M.287A-1976), has a detachable drip pan and is designed to hold a single candle.

Materials & Making
This candlestick, made of Sheffield plate, is assembled from four die-stamped sections which are soldered together. Sheffield plate was discovered in about 1742 by Thomas Boulsover , a Sheffield cutler. He found that copper and silver in unequal amounts, when fused, and subjected to mechanical pressure, expanded together indefinitely at a uniform rate. The introduction of Sheffield plate revolutionised the plating industry, for it offered an effective, relatively cheap, supremely versatile and durable technique which could convincingly imitate the surface appearance of solid silver.

Design & Designing
The design for this candlestick exists as an engraving in a Birmingham pattern book, now in the V&A (museum no. E.2060-1952; design no. 338). Although untitled, this book is now considered to be a pattern book from Matthew Boulton's Soho Manufactory in Birmingham, and datesable to between 1770 and 1775. The design may have been supplied by the architect James Wyatt (1746-1813), who is known to have undertaken designs in silver and Sheffield plate for Boulton in 1776.

This candlestick, (one of a pair), was made by the Sheffield Plate process of copper fused with a surface layer of silver. It is assembled in four main sections, and each section compromises three sides of die stamped plate soldered together. The base is filled.

The candlestick is on a pyramidal base of concave sides and canted corners. The torus is decorated with a border of water leaf and tongue ornament. Each corner is hung with a drop of bell flowers. The upper part of the base is decorated with a border of reeding bound with a ribbon. The central section comprises a slender baluster enclosed by three acanthus ornamental volutes. The baluster rests on and is capped with bands of pearling and this section rests on a circular podium made up of three, paw feet.

The etiolated capital is ornamented with a spread of overlapping leaves that fan out to create the flat drip pan. The nozzles are made of plain cylinders.

The design is engraved in a Birmingham pattern book, (E.2060-1952) kept in the Prints and Drawings Collections of the Word and Image Department and is represented as the design number, 338. Although without a title and catalogued as anonymous, this is now thought to be the pattern book of Matthew Boulton's Soho Manufactory in Birmingham and dates from 1770-1775. The design may have been supplied by the architect James Wyatt who is known to have made a silver design for Boulton in 1776.

BADA 2004 Exhibition label:
CANDLESTICK
Sheffield Plate, possibly designed by James Wyatt (1746-1813), attributed to Matthew Boulton (1728-1809)
This candlestick is one of a pair of based on a design in a 1770-5 pattern book associated with Matthew Boulton. Boulton actively sought designs and commissions from the most fashionable architects of the day, including Robert Adam, Sir William Chambers, James Stuart and James Wyatt. Wyatt is known to have made silver designs for Boulton in 1776.
Boulton revolutionised the metalworking trades with his emphasis on high quality mass-produced work. His Soho Manufactory in Birmingham was a huge 3-storey building with workshops, showrooms, offices and stores, and even accommodation for its workers.
M.287-1976 [March 2004] 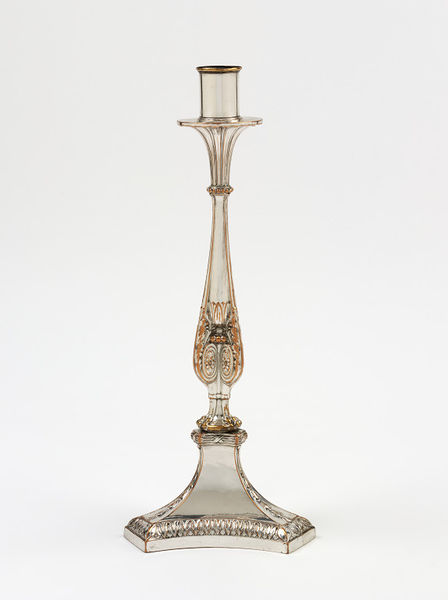