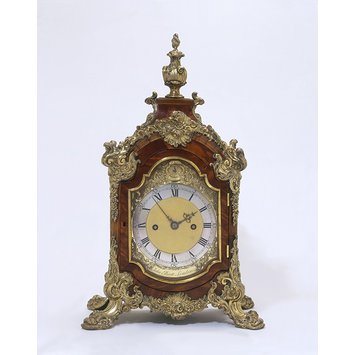 Object Type
This table-clock with walnut-case and silver-gilt mounts has a verge eight-day movement with four quarter repeating mechanism operated by a cord at the back. When this is pulled, the clock strikes the last hour on the bell and the nearest quarter past it on six bells of different tones. The escapement, crown-wheel and pallet are modern replacements. The clock is signed twice, with the one on the rear plate accompanied by the number '36803'.

Historical Associations
This clock came originally from the well-known dealer and horologist Percy Webster, who claimed that it had once belonged to Catherine the Great, Empress of Russia (1729-1796).

Design
It has been suggested that the very fine silver-gilt mounts may be after designs by G.M. Moser (1706-83).

Maker
John Ellicott (1706-1772) was the most famous member of a distinguished family of clockmakers. He took over his father's business in 1733 and was in partnership with his son from 1757. He supplied clocks and a terrestrial globe to the Spanish royal family. In the apartments of Queen Maria Cristina at the Palacio Real, Madrid, is a table clock signed by Ellicott which has very similar silver-gilt mounts.

Rectangular case with arched top drawn up to form a plinth for the finial . The front and back are each fitted with a hinged glazed door with brass lock and hinges; the glazed panel is shaped to a broken arch at the top and in inverted broken arch at the bottom. The sides are pierced with rectangular glazed panels with concave upper edges. All the glazing is framed externally in a narrow silver-gilt moulding of plano-convex section. Elaborate silver-gilt mounts cast and chased with rocailles and secured by iron screws and pins. They comprise: four splayed feet with wave-like extensions up the vertical edges of the case, linked accross the front and rear edges by swags formed of rocailles, and across the sides by small swags of foliage and flowers; on the top corners are four corresponding mounts, with scroll-shaped terminals instead of feet, and pendant trails of flowers, similarly linked accross the top edges and sides, the side swags being rather more elaborate than those at the bottom, finial in the form of a flaming urn mounted on the plinth on the top of the case, which is flanked on either side by two applied rocailles.
Broken-arch silver-gilt dial with silver chapter ring framing a matted gilt centre containing two winding-holes; the hours are indicated in Roman numerals and the five-minute intervals in Arabic ones. Blued steel hands. Outside the chapter-ring the dial is polished and decorated with applied rococo scrollwork, also of silver-gilt, framing at the top a small 'STRIKE' and 'SILENT' dial with a blued steel indicator, and at the bottom a cartouche engraved John Ellicott London.
Movement between two brass plates separated by plain pillars with central bun-shaped mouldings. The rear plate is engraved with foliated scrollwork and signed John Ellicott London scratched below the signature, apparently with a pin, is the number '36803'. Brass bob pendulum which can be engaged into a steel locking-hook on the rear plate of the movement. A cord for the repeating mechanism ending in a brass button (modern), passes over a pully on the back of the rear plate and out through a hole at the bottom of the case on the right hand side at the rear. When this is pulled the clock strikes the last hour on one bell, and the nearest quarter past it by striking 6, 12 or 18 times on six bells of different tones.

Walnut, mounted in silver gilt, with brass components to the movement and glass panels.

The dial and back plate are signed 'John Ellicott London'

Made in London by John Ellicott (born in 1706, died in 1772). Purchased from Ronald Lee, dealer in Bruton Place, SW1 who had bought the clock from Lord Kenyon. It previously belonged to Percy Webster, the well-known dealer in antique clocks. According to an unconfirmed tradition, the clock originally belonged to Catherine the Great of Russia (1726-96)

A long-case clock and a bracket clock both by John Ellicott with very similar mounts are in the Royal Palace, Madrid. He also supplied a celestial and terrestial globe to the Spanish court. These are documented in the 1789 inventory of the Spanish Royal Collection compiled after the death of Carolos III. This substantiates a tradition that John Ellicott visited Spain in order to give advice on the production of clocks and watches in that country

John Ellicott was the son of the watchmaker of the same name who died in 1733. It is not known whether John junior was apprenticed to his father. By 1728 John junior was established in Sweeting's Alley near the Royal Exchange. Following nomination supported by Sir Hans Sloane, Martin Ffolkes, John Senex the globe-maker and John Hadley the astronomer, Elicott was elected a Fellow of the Royal Society in 1738. Ellicott established an observatory in his house in the parish of St John's Hackney. John Ellicott junior produced over five thousand watches between 1733 and 1772.

He was succeeded by his eldest son Edward who worked in partnership with his father from 1757.

British Galleries:
The silver-gilt mounts of this clock incorporate many of the main Rococo ornamental devices, including asymmetrical 'rocaille' (shell) ornament and naturalistic floral festoons. They may have been based on designs by George Michael Moser (1706-1783). John Ellicott was the most famous member of a distinguished family of London clockmakers. [27/03/2003] 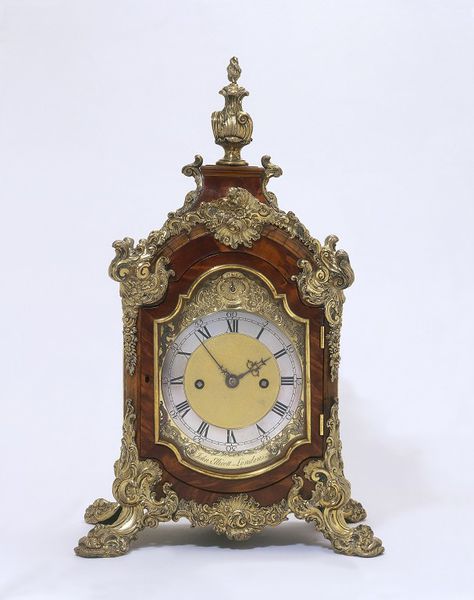