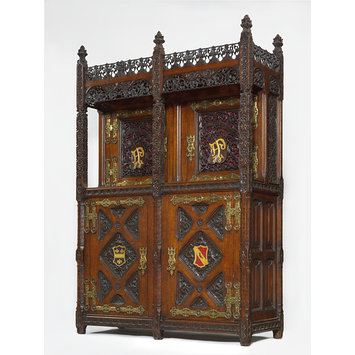 Object Type
This cabinet is in the Gothic style and is based on early 16th-century cupboards used for storing food. It was designed about 1845 by A.W.N. Pugin (1812-1852) for both serving and storing food. The carved foliage in the upper doors of this cabinet is pierced to allow air to circulate. Bread, cheese and fruit were stored in the cabinet between meals. Richly carved and embellished with personal iconography, it has the added significance that it was designed for the dining room of Pugin’s own house.

People
Augustus Welby Northmore Pugin (1812-1852) designed this cabinet for the dining room in his own home, The Grange, Ramsgate, Kent. Furniture design was one of the most important and influential aspects of Pugin’s creative output and he designed a range of furniture types over a period of about 25 years. He was very knowledgeable about Medieval furniture and based his design on examples that he had seen. He decorated the upper part of the cabinet with his monogram, 'AWP'. The coat of arms on the lower right-hand door is that of the Pugin family. On the left-hand door is the Welby coat of arms, his mother's family. The painted decoration on the cabinet relates it to Pugin’s lineage and thus establishes it within the iconography of the dining room, where Pugin sought to convey his family history to his guests.

Place
The Grange, Ramsgate, Kent, was designed and built between 1843 and 1844. As well as living there with his wife and eight children, Pugin used the library study as his office. He designed many of the furnishings for this house. Today the Grange is Grade 1 listed and is owned by the Landmark Trust, a national charity.

Oak cabinet in the Gothic style. Highly decorative, with carved, painted and gilded features, and ornate brass hardware. Two sets of double doors open onto storage space, the upper level cupboards being recessed to half the depth of the lower. At mid-level there is a flat shelf-top flanked by three highly carved supports; these extend upwards to the panels of fretwork surmounting the cabinet.

The upper door panels include shields bearing the monogram of A.W.N. Pugin, surmounted by a scroll bearing the inscription "manners maketh man" in Gothic lettering. These are inset into a square panel of recessed fretwork, atop a contrasting red felt backing. The lower door panels include the family shields of the Welby and Pugin families to the left and right respectively. These are inset within a recessed, carved central panel, which along with other triangular recessed panels gives the effect of a cross-hatched pattern to the lower doors. Both sets of doors feature elaborate brass strap hinges, extending across the length of the doors to the top and bottom of each panel. These are complemented by similary ornate escutcheons to each door.

The upper side sections of the cabinet feature a carved monogram, formed of a large Gothic M enclosing a lowercase 'd' and 'b'.

Shields with arms of the Welby and Pugin families and Pugin's monogram.

Inscription on both upper doors 'manners maketh man'; shields with arms of the Welby and Pugin families and Pugin's monogram.

The Grange may be considered one of the most important domestic buildings of the nineteenth century. It was constructed by Myers between 1843 and 1844, following which Pugin had the principal rooms fitted out with panelling, stained glass, and other decorations (1846-1850). The dining room, on the ground floor, although altered to some extent, gives a clear impression of its original appearance in Pugin’s time as the fireplace, panelling, stencilled ceilings and stained glass are largely intact. Given the configuration of the dining room, this cabinet must have stood against the north-east wall of the room, at the opposite end to Myers’s ornately carved fireplace. This fireplace is surmounted by a carved and painted beam bearing his family’s coats of arms. As Pugin’s son-in-law John Hardman Powell later recalled, these were ‘the Arms and Supporters of his Father, the elder Count de Pugin; two three-light windows looking Seaward were filled above transums [sic] with Arms in Stained glass of the English Families related to his Mother, Welby, Towers, etc., etc., the roof was of stained beams, the walls wainscoted and hung with sea-pieces.’ Fitting in with this family iconography, the cabinet is embellished with symbols of personal significance to Pugin: Pugin’s monogram appears on the shields of the upper panels, while those below are emblazoned with the arms of the Pugin and Welby families (Pugin’s mother was from the Welby family of Lincolnshire). Identical shields appear on two stained-glass panels in the dining room (the lower windows are plate glass to afford views out to the sea).

As a key element of a room designed for entertaining, this cabinet would have played a part in Pugin’s social events, such the parties he threw on the Twelfth Day after Christmas, when he ordered ‘a huge Cake with St. George and dragon modled [sic] especially, and his many guests took characters, wearing badges drawn by himself’. Its form is based on early sixteenth-century cupboards used for serving and storing food: the carved foliage in the upper doors of this cabinet is pierced to allow air to circulate, allowing bread, cheese and fruit to be stored between meals; according to Powell, Pugin ‘had a strong appetite and the larder was always well stocked with fine hams, cheese and butter, home baked bread’.

It also encapsulates Pugin’s personality and sense of humour. Below Pugin’s painted monograms on the upper doors are the carved inscriptions: ‘manners maketh man’, a quotation from William Horman (ca. 1440–1535), headmaster of Eton and Winchester. This quotation not only references the original location of the object at the Grange, but also relates to Pugin’s frequent use of moralizing mottoes on his objects, as on his design for Minton’s encaustic bread plates (an example in the V&A, C.46-1972), which bears the lettering: ‘waste not / want not’. In the case of 'manners maketh man', the words may well have been aimed at his children. The cabinet was made following the death of Pugin’s second wife, Louisa, in August 1844 and before he married his third wife, Jane, in 1848, so in this interim period Pugin was perhaps having to assume a closer role in the manners and upbringing of his children. By 1851 Pugin was in residence at the Grange with this third wife, Jane, five of his children (two of whom, Edward and Agnes, were young teenagers). Although Pugin family meals were usually taken in the kitchen, Powell recalled seeing in the morning: ‘a procession of wooden chairs going from the kitchen to breakfast in the dining room, behind each a small child [ . . . ] Basins of bread and milk were the rule for the young ones, with a serving of ham on patron saint and feast days; tea and bread and butter for the elders. “Now make a good breakfast, so that you may do a good day’s work”, Mr Pugin said, as we sat down’. Pugin would have been standing opposite the cabinet as he spoke these words.

The carved decoration and rich metalwork combine the finest work of two of the manufacturers with whom Pugin had close relationships. The superb quality of the carving makes the firm of George Myers a likely candidate. Myers, the builder of most of Pugin’s buildings, made furniture at his works at Ordnance Wharf, Lambeth. The extremely ornate strap-hinges and escutcheons were made by the firm of Hardman of Birmingham, and Pugin collaborated with both Hardman and Myers, together with Minton, on the Medieval Court of the Great Exhibition in 1851. The form and exceptionally rich carving of the cabinet reflect Pugin’s activities as an antiquarian as well as a collector. Pugin believed that a close examination of ancient objects was essential to any real understanding of the principles of medieval craftsmanship – a theme later embedded in the Arts and Crafts movement. As prototypes for its rich carving, Pugin searched out and purchased medieval objects to use as patterns and examples for those craftsmen executing his designs. A few years after this cabinet was made Pugin wrote to the cabinetmaker Crace, advising him that ‘I have got a great many fine things abroad this time in various ways & a few very grand tracery panels for you for models to work by . . . they will be very useful no drawing can give these things’. The carving on this cabinet was therefore based on medieval carvings such as those in the collection of the V&A – 96 pieces of architectural decoration from Pugin’s collection that served as models to in the Thames Bank workshops for the construction of the new Palace of Westminster, and which were transferred from the Office of Works in 1863 (8129 to 8224-1863). The carving of the cabinet is kept within very tightly defined areas, and the decoration thus follows Pugin’s tenet of architectural design that ‘all ornament should consist of enrichment of the essential construction of a building’ which he espoused in The True Principles of Pointed or Christian Architecture (1841).

Pugin’s design for this cabinet appears to have been the prototype for at least two similar cabinets. He developed this design for a commission about two years later, when, ca. 1847, he designed a cabinet for Henry Sharples of Liverpool, now in the Indianapolis Museum of Art, IN (1999.74). The Sharples cabinet was made by Myers – a drawing for it was still in the possession of the Myers family in 1999 – strengthening the likelihood that Pugin’s cabinet was also made by that firm. In 1851 a cabinet of very similar design was exhibited by Myers in the Medieval Court at the Great Exhibition and illustrated in The Art Journal Illustrated Catalogue of the Industry of All Nations (1851; reproduced in Jonathan Meyer, Great Exhibitions [2006], p. 65, pl. A112).

Following Pugin’s death at the Grange in 1852, aged forty, his family let out the house until his third wife Jane and children returned in 1861. At this time Pugin’s son Edward (1834–1875) made alterations, including the removal of the wall against which the cabinet must have stood. The cabinet may have been taken to Ireland by Edward’s then business partner, the Dublin architect George Coppinger Ashlin (1837–1921), possibly around 1867 on Ashlin’s marriage to Edward’s sister Mary (1843–1933). The cabinet was later owned by another Dublin architect, W. Percy Le Clerc (1914–2002), before being acquired by the London collector John S.M. Scott in 1984. Mr Scott lent the cabinet to the Museum from 1991 until it was acquired in 2015.

British Galleries:
This cabinet was designed by the architect A.W.N. Pugin for use in his own dining room. It is based on late-Medieval cupboards. The elaborate carving is deliberately contained within the structural framework. [27/03/2003] 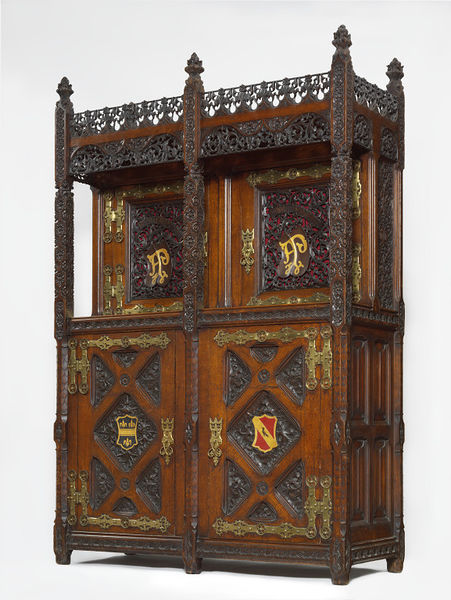