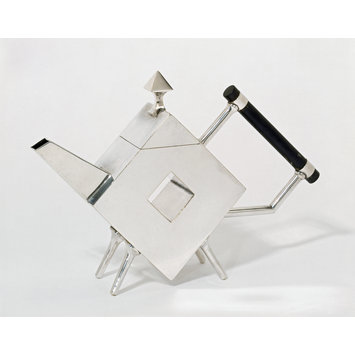 Object Type
Because tea is made by infusing dried tea leaves in boiling water, the handle of the teapot is often made of wood or some other organic material to prevent it from becoming too hot.

Design & Designing
Christopher Dresser designed utilitarian objects for the general public, making full use of the latest techniques of mass production, and he is therefore often regarded as the 'father of industrial design'. His most innovative designs were for objects to be made in metal. Unlike his designs for ceramics and glass, which often resemble plant forms in their shape, ornamentation or colouring, his designs for metalwork objects tend to be fully abstracted from their organic source. He frequently employed symmetrical, rectilinear shapes and undecorated surfaces. This design appears in the costing book of James Dixon & Sons for 1879 as design no. 2274 and is described as 'English Japanese', pointing to the Japanese influence in some of Dresser's most radical metalwork designs.

Trading
Dresser was a prolific worker and produced designs for numerous manufacturers, including Hukin & Heath (about 1878-1890s), Elkingtons (about 1875-1888) and James Dixon & Sons (about 1879-1890s). Some of his designs were considered too ahead of their time to go into production, and six exist only as prototypes.

Description from the Dixon calculation book of 1879 (now in the Sheffield Central Reference Library). "Teapot. Holds 1 1/2 Gill. Designed by Dr. Dresser. Body first put together in six pieces, 3 3/4 inch square [body], then the top part sawn off for the cover. Flat wire hard soldered inside top part of body and round the cover inside. Spout put together in four pieces; square tube, 1 1/16 inches made and passed through the centre of body and hard soldered in. Cast and turned part with tube socket hard soldered in ends for ebony handle. Cast knob." The "Stamping " line is not filled in but the six pieces of metal used for the body were cut out with a stamping machine. Two of them the 3 3/4 inch square sides turned on end as a lozenge (giving the body a diamond shaped profile) while the remaining four make up the square box-shaped body. A corner of the box shape was simply sawn off to make the lid, needing no extra metal and less labour than making a separate lid. (The lid is attached to the body by a plain hinge at the rear). The square hole in each side would probably have been stamped out by machine so that when the box shaped body was assembled, the square tube that forms the hollow centre could be inserted. The handle was made in three cast and turned parts (the lower, angled, arm requiring two), with separately made tube sockets to take the ebony rod. The four legs were cast and turned and hard soldered at right angle to the side walls of the body. (Rudoe, Judy, Design and Manufacture, Evidence from the Dixon & Sons Calculation Books in ed. Charlotte Gere and Judy Rudoe, "Christopher Dresser in Context," London, The Decorative Arts Society, No.29, 2005, p.70-1. ill.).

Andrew McIntosh Patrick was the Managing Director of the Fine Art Society, 148 New Bond Street, London W1Y 0JT for 30 years until 2005. Between 1972 and 2005, he acquired a collection of metalwork designed by Dr. Christopher Dresser of approximately 50 pieces which until the sale of his collection by the Edinburgh auctioneers, Lyon & Turnbull on April 19, 2005, was the most distinguished collection of such material in either a public or private collection. 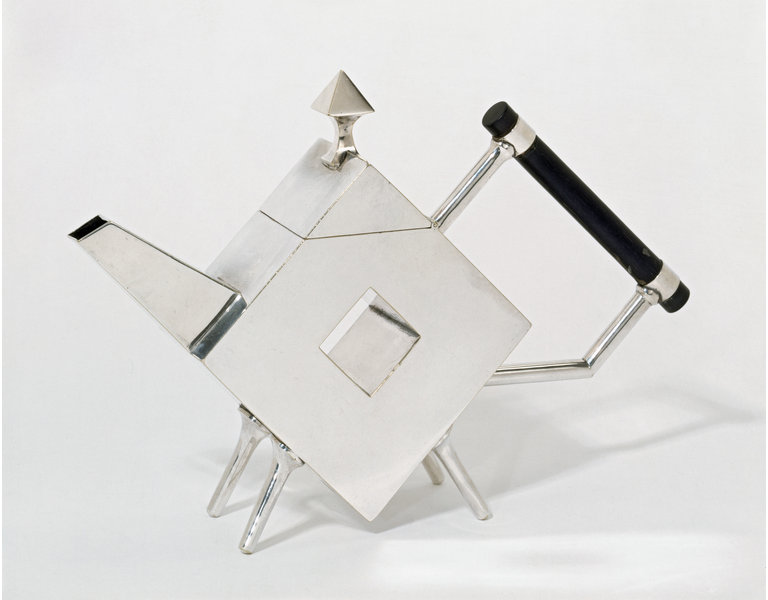