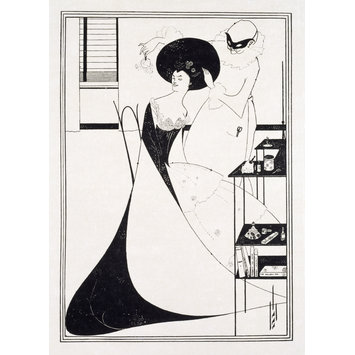 The Toilette of Salome II

Object Type
This is a book illustration to Oscar Wilde's Salome, first published by John Lane in 1894.

People
Aubrey Beardsley (1872-1898) received his first commission in 1894. His short career lasted from this commission to his tragically early death of tuberculosis in 1898 at the age of 25. Beardsley is principally known for his work as a book illustrator. With little formal art training he evolved a unique style, characterised by black and white work and delicate line drawing. He combined this with an unconventional approach to illustration where he did not slavishly follow the text but gave full rein to his imagination: this was particularly the case with Salome. Beardsley placed aesthetic interpretation over historical correctness, preferring the illustrations to be, as he said, 'simply beautiful but irrelevant'.

Historical Association
Although Beardsley was closely linked in the public mind with Oscar Wilde they did not work closely together even on this commission. It is therefore understandable that Beardsley deeply resented the fact that the Wilde scandal of 1895 cost him his editorship of The Yellow Book. This said, in Beardsley's own work he often sought to overturn social and aesthetic conventions. In the Salome illustration Beardsley did make reference to the Aesthetic style that Wilde promoted, including the E.W. Godwin-style dressing table and, in the earlier version, Japanese and Islamic ceramics. While Beardsley and Wilde shared an interest in the decadence of this femme fatale, Beardsley's first version had outrageous sexual references, unacceptable to both the author and publisher.

Black and white line block print on Japanese vellum depicting Salome, elegantly attired in a flowing dress and large hat, sitting in front of a Godwin dressing table complete with cosmetics and books, being coiffed by a bald pierrot of a barber, wearing ruffles. In the top left of the image is a slatted blind over a window which appears to be partially covered by curtains.

'PLATE XII'
Printed text in the lower left hand corner of the sheet.

Signed with the artist's monogram in the lower right hand corner of the image.

The original design for 'The Toilette of Salome' (E.433-1972) was deemed unacceptable by the publishers and so Beardsley was asked to provide another design which is the present image (E.434-1972). According to Stephen Calloway in his book, Aubrey Beardsley, London: V&A Publications, 1998, p. 77 and p. 80: 'In the event, Beardsley supplied in place of this drawing a second, yet more daringly abstracted toilet scene in which a bald pierrot of a barber, dressed in eighteenth-century ruffles, coifs a distinctly modern Salome, who sits, again, by a Godwin dressing-table. On a shelf he mischievously included a number [of] books, the revealing titles of which were quite legible; this little decadent library comprised Manon Lescaut, and Les Fêtes galantes, the slightly more risqué Golden Ass and two volumes yet more scandalous according to the mores of the day: Zola's Nana and one simply lettered Marquis de Sade. In the same way, after much discussion at the Bodley Head and a great many hurried consultations and letters and telegrams back and forth between Wilde and Lane, Beardsley eventually submitted to criticism in two further cases, and agreed to add extra designs to the set, including another wholly 'modern' image, The Black Cape. As he wrote to Ross, 'I suppose you've heard all about the Salomé row. I can tell you I had a warm time of it between Lane, Oscar and Co. For one week the numbers of telegraph and messenger boys who came to the door was simply scandalous ... I have withdrawn three of the illustrations and supplied their places with three new ones (simply beautiful and quite irrelevant)'.'

British Galleries:
Aubrey Beardsley's illustrations had a dramatic impact when first published and added an element of decadence to the Aesthetic Movement. In 1893 he illustrated Oscar Wilde's play 'Salome'. 'The Times' described these drawings as 'fantastic and grotesque'. This print replaced an original judged too obscene for publication. [27/03/2003] 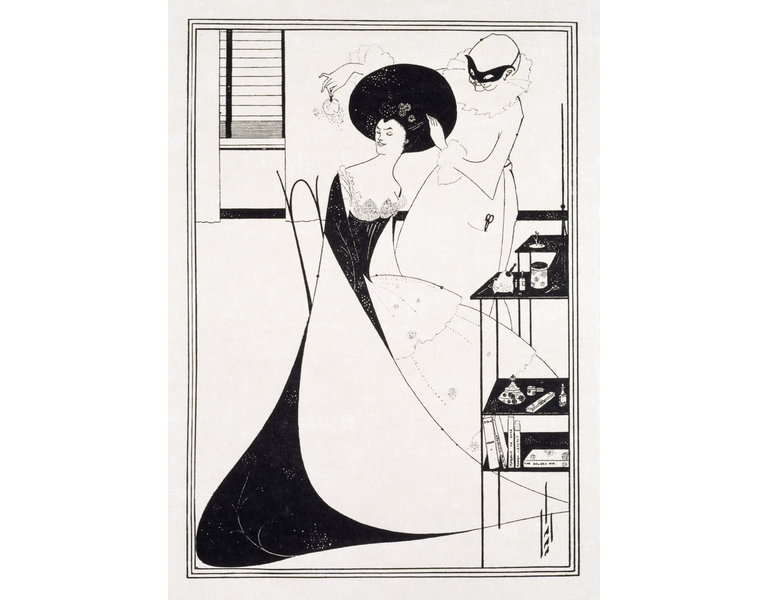