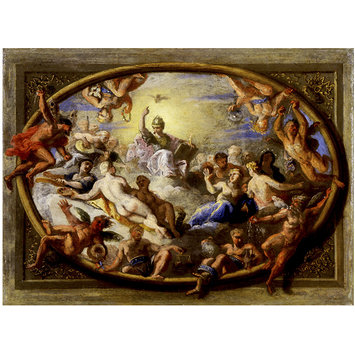 Minerva with Allegorical Figures of the Arts and Sciences (sketch for the ceiling of the Banqueting House, Hampton Court Palace)

Antonio Verrio (ca. 1639-1707) was born in Lecce, South Italy and trained either in Lecce or Naples. He travelled through Italy and France where he settled for a while in Toulouse. He then went to London where his main commissions were the decoration of the state rooms at Windsor Castle (1675-ca.1684) and the new state apartments at Hampton Court Palace (1700-02).

This painting is a preparatory work for a larger picture which main theme is William III's enlightened patronage of the Arts. It shows the goddess of Wisdom, Minerva amidst clouds, surrounded by allegorical figures representing Astronomy, Music, Poetry, Architecture, Sculpture and Painting. This oil sketch was executed between 1700 and 1702 when Verrio was entrusted by the King with the decoration of Banqueting House in Hampton Court.

A helmeted goddess, surrounded by a halo of light, sits amidst clouds with a company of lively figures holding different attributes.

oil on paper mounted on panel

Given by Sir Isidore Spielman, through the National Art Collections Fund, 1916
Commissioned by William III (1650-1702)

Historical significance: This painting is a preparatory sketch for a larger painting commissioned by King William III (1650-1702) to Antonio Verrio. This kind of work is commonly known as modello, i.e. a reduced-scale detailed preparatory drawing or painting that shows how the final composition would look like.
This work shows the mythological figure of Minerva, the goddess of Wisdom, surrounded by allegorical figures representing Astronomy, Music, Poetry, Architecture, Sculpture and Painting. In the final version (still in situ), Sculpture is holding a bust of William III crowned with laurel. The subject symbolised the King's enlightened patronage of the Arts.
The asymmetrical composition and the lively gesture of the figures, a few overlapping the edges of the painted oval frame, are typical of Verrio's manner. He specialised in providing his designs with a theatrical grandeur that helped to establish the vogue for Baroque decoration in England. The palette dominated by strong hues of red and reddish brown enlightened by touches of pure white and intense blue are reminiscent of the art of Rubens (1577-1640) and Van Dyck (1599-1641), still en vogue in England when Verrio came to London in 1671. His figures are often of beautiful quality, influenced by Neapolitan and French painting, which he knew before even travelling there thanks to Giovanni Andrea Coppola (1597-1659) with whom he collaborated in Lecce.
The complex composition, which recalls the earlier Gods Assembled on Mount Olympus, c. 1793, Museum and Art Gallery, Northampton, is reminiscent of the great 18th-century Venetian decorative scheme, another evidence of the artist's extensive visual culture. Upon the death of the King in 1702, Verrio painted for Queen Anne his last royal commission in the Queen's Drawing Room.

British Galleries:
This is a design for the ceiling of a royal banqueting house. The classical goddess of wisdom, Minerva, is surrounded by figures representing the Arts. For 30 years the Italian artist, Antonio Verrio, monopolised most of the important British royal commissions. He had been invited to England from Paris in 1671 by the English ambassador. [27/03/2003] 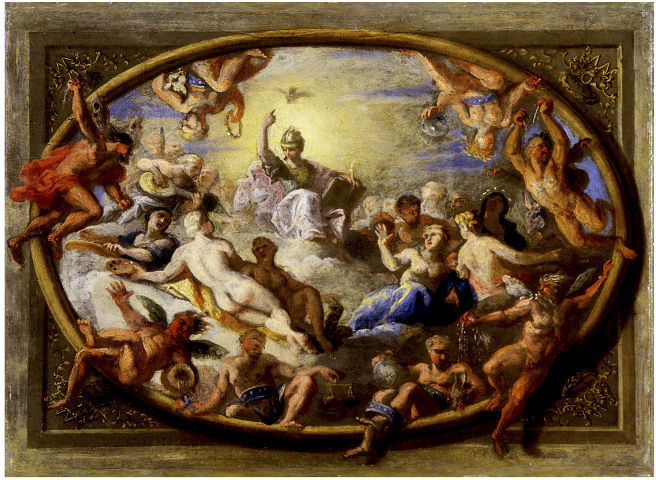