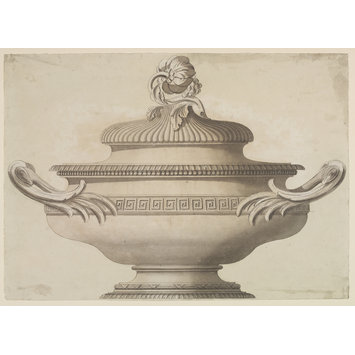 A design for a silver soup tureen

Pencil, pen and ink and grey wash on a blue washed ground on laid paper. The sheet is watermarked HIS Ivilledary , (E. Heawood, Watermarks mainly of the 17th and 18th Century, 1950, N.2971) used on a document in London 1766.

The body of bombé form. The base has a gadrooned foot and a band of reed and ribbon moulding. On the body a band of Greek key pattern, on the lid a flower. The handles formed as stylized vegetables stalks. On the back of the sheet one of the handles has been traced through in pencil.
This is a design for a soup tureen for a service made for the 4th Duke of Marlborough in 1768- 1769 retailed by Parker and Wakelin. Two oval and two round tureens were made by Sebastian and James Crespel in 1769, of which one example is in Leeds City Art Gallery. A later version is at Blenheim Palace.
The tureens as made replaced the Greek key with a Vitruvian scroll.
This appears to be a presentation drawing.
Bought together with 72 other drawings from Major H. Bateman via J. Starkie Gardner on the 29th November 1910, for £ 37-0-0.

A design for a silver soup tureen by John Yenn, after Sir William Chambers, c. 1769

In addition to being an accomplished architect and the chief
assistant to Sir William Chambers, Yenn was a gifted designer of
silver in the neoclassical style. A tureen almost identical to this
design was made for the Duke of Marlborough by the silversmiths
Sebastian and James Crespel under the aegis of John Parker and
Edward Wakelin and is now in Leeds City Art Galleries.
This design incorporates a number of typical neoclassical motifs
including handles made from palm leves twisted back, and the
decorative key pattern which was replaced by a' Vitruvian scrole'
E. 4992-1910 [] 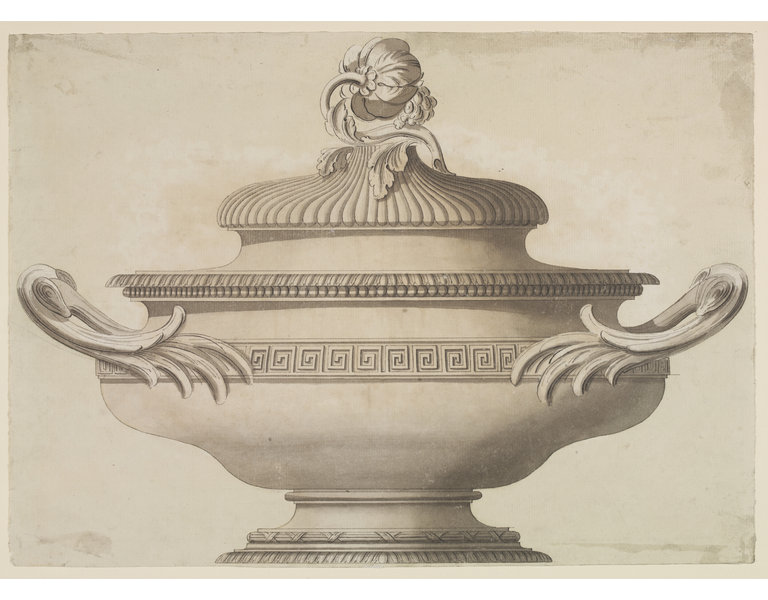