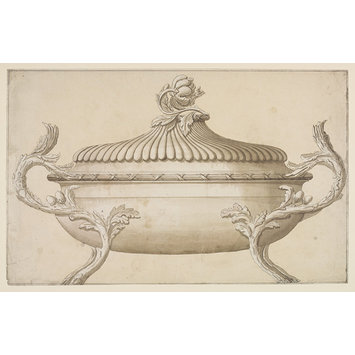 A design for a silver soup tureen

Pencil, pen and ink and watercolour on a yellow watercoloured ground on a laid paper, watermarked with a fleur de lys above a bend above L B G.

A design for a silver soup tureen. The tureen is of bombèe form with a band of tied reeding around the top. The lid is spirally gadrooned with a naturalistically rendered handle in the form of an artichoke or flower. The feet and handles are made from one serpentine oak branch, completed with acorns. Behind the design lie a number of French rococo prototypes including the Berkeley Castle Service by Jacques Roettiers of 1735-38. A tureen to this design was made in 1767-68 marked by John Swift for an unknown client, making it the earliest datable silver design by Chambers whose appearance we know.
In 1771-1772, the design was used for a pair of tureens (marked by Sebastian and James Crespel) for Chamber’s architectural client the Earl of Pembroke, of Pembroke House and Wilton.

The sheet has a ruled pen and ink border, and is probably a preparatory presentation drawing.

A design for a silver soup tureen by John Yenn, after Sir William Chambers, c. 1770

This design for a tureen combines a smooth neo-classical form with
decorative motifs drawn from a rustic oak. The cover is very
similar to that on the other tureen design by Yenn shown nearby
although the handles are in the form of oak branches with acorns.
The oak and artichoke handle derive from Parisian silver where such
naturalism had been popular since the 1740s or 1750s. 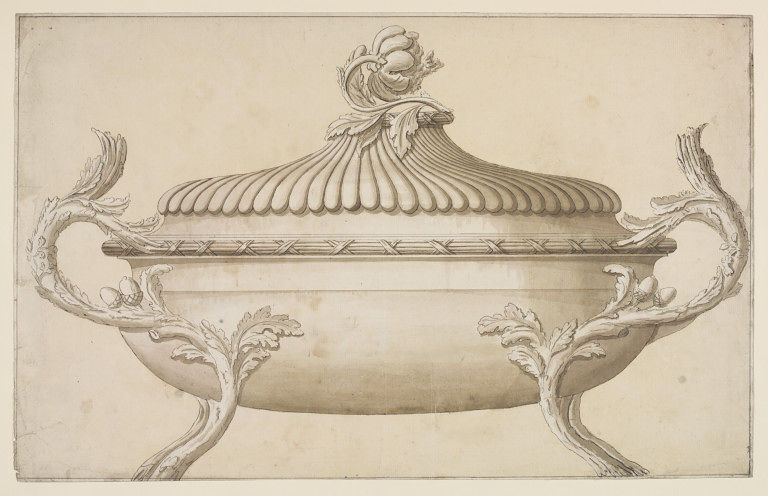