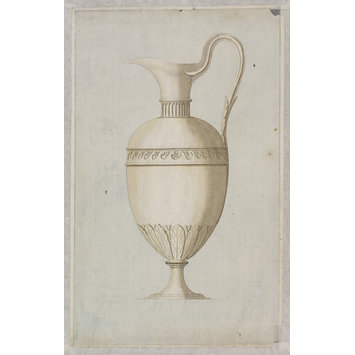 A design for a silver communion flagon

Pencil, watercolour on laid paper, watermarked with a crowned shield with a horn above a LBG and a bell similar to W. A. Churchill, Watermarks in Paper, 2006,253 watermark for L. Van Gerrevink 1765.

A design for a silver communion flagon.
The lower part of the body a calyx of acanthus leaves and a band of running scrolls across the upper part. Plain spout.
This drawing is taken from a design by Sir William Chambers and may be a preparation for a finished office drawing. Yenn was during this period a pupil of Chambers. A flagon to this design was made for the Duke of Marlborough as a part of a communion set, was made by Ansill and Gilbert in 1769 to 1770 and marked by Parker and Wakelin and it survives at Blenheim Palace. The Flagon matches the drawing except for the addition of acanthus on the foot and acanthus strengthening underneath the spout. Chambers was working for the duke of Marlborough from 1767 until at least 1775.
For a simplified drawing of this flagon shown at a smaller size see 3861.44.
Bought together with 72 other drawings from Major H. Bateman via J. Starkie Gardner on the 29th November 1910, for £ 37-0-0.

A design for a silver communion flagon by John Yenn, after Sir William Chambers, c. 1775 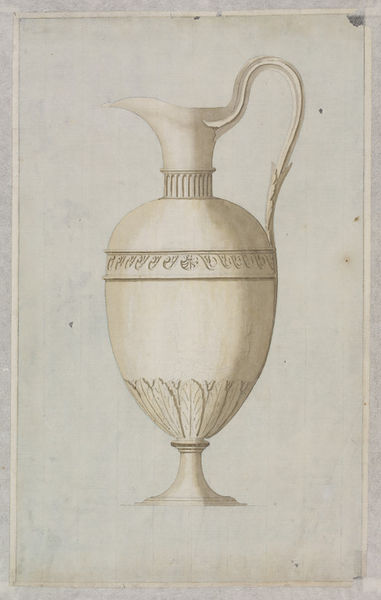