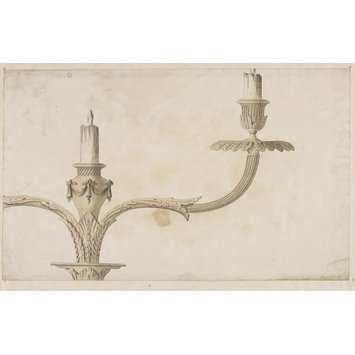 A design for a silver or ormolu candlestick branches.

Pencil, pen and ink and wash on laid paper, watermarked with a W, perhaps for J. Whatman.

A design for a silver or ormolu candlestick branches.
The branches spring from an acanthus calyx and have acanthus and reeded decoration as have the nozzles. Between them is a vase holding a third candle. They are set in a candlestick nozzle exactly the same as E.5030-1910. The drawing has been cut just below the start of the nozzle and across half of the left hand arm.
This candlestick branches are for use in the candlestick E.5030-1910, the branches design however are in a neoclassical style of circa 1770 and may show an updating of the existing candlestick to a later style. The branches are very close in design to those of the ormolu and bluejohn vases designed by Chambers and made by Matthew Boulton in 1770- 1771.
Bought together with 72 other drawings from Major H. Bateman via J. Starkie Gardner on the 29th November 1910, for £ 37-0-0.
A drawing of a similar pair of branches is at the RIBA (VOS/89, page 24. Young 1986, fig.34).

A design for a silver or ormolu candlestick branches, by John Yenn, after Sir William Chambers, c. 1770 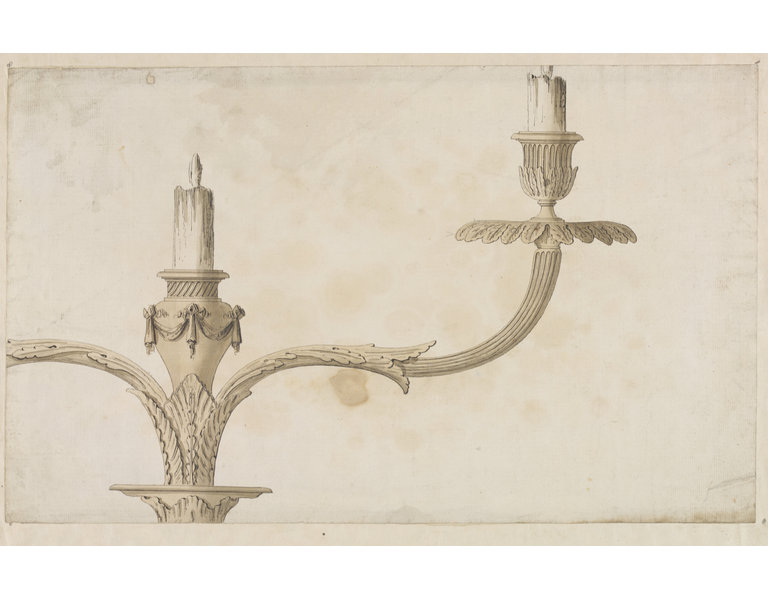