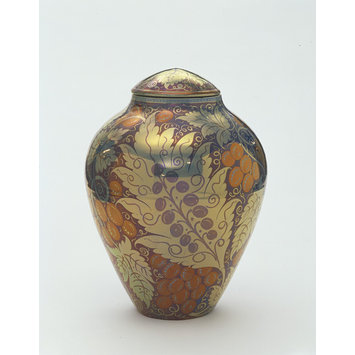 Object Type
This vase and cover was made at William De Morgan's pottery, one of his many unique wares. De Morgan's pottery was made for the discerning and fastidious collector who was interested in the history of ceramics, who had a romantic view of the past and who was anxious to preserve these through contemporary arts and crafts. This particular vase and cover have assumed iconic status since, in 1909, De Morgan chose to hold it when portrayed by his wife, the painter Evelyn Pickering.

Materials & Making
De Morgan gave a very clear account of his method of lustre firing in a lecture given in 1892. This, simplified, describes mixing metallic oxides, such as copper or silver, with white clay, to which was added gum arabic to make handling it easier. This was painted on and the ware was packed closely in the kiln, fired at a low heat. At the critical moment, dry material such as sawdust was introduced into the kiln and, once fired up, the kiln is shut down closing off all oxygen. This smoke-filled environment is known as a 'reducing atmosphere'. The effect is to leave an iridescent metallic deposit on the surface, which must be cleaned and polished once the ware has cooled.

Design & Designing
De Morgan's passion was for the arts of the Middle and Far East. He drew virtually all his inspiration from the richly-coloured, lustred and ornamented wares of Persia (Iran), from the 'Isnik' wares of 16th century Turkey and from Renaissance Italy. In this he was part of a continental trend towards historicism. One of his most enduring interests was in lustred glazes. He spent many years researching the early Persian and Italian methods for producing this exotic effect and, having perfected the technique he went on to demonstrate his mastery in creating multiple lustres in different colours. This example is a succesful firing of gold and ruby lustres on a dark blue ground. The pattern owes much to Italian maiolica and Isnik wares.

People
William Frend De Morgan (1839-1917) was a close friend of William Morris for whom he designed some stained glass, tiles and furniture. His ceramics sold through Morris & Co. De Morgan was a skilful designer and a pragmatic potter with a fierce interest in historic techniques and decorative styles. He began his first attempts at firing ceramics in the early 1870s. By 1872 he had set up a pottery and showroom in Chelsea; he moved to Merton Abbey (alongside William Morris's works) in 1882; in 1888 he moved to Sand's End, Fulham. To preserve his health he spent time each year in Italy from the mid-1890s, sending designs to England, and also to Cantagalli in Florence. He made his last pots around 1907 and in the later years of his life he became a highly successful novelist.

Designed by William De Morgan (born in London, 1839, died there in 1917) and made at the De Morgan pottery, Sands End, Fulham, London.

Exhibition: Leighton House, June 1972. Exhibited at 'Europaische Keramik des Jugendstils' in Dusseldorf. Mrs William De Morgan was the painter Evelyn Pickering. A portrait by her of her husband, painted in 1909, shows him holding this vase and cover

British Galleries:
Arts and Crafts designers and makers were frequently inspired by historical forms, patterns and techniques. The potter, William De Morgan, is chiefly celebrated for the manufacture of brightly coloured tiles and pots with lustre finishes. His influences were pottery of the 15th and 16th centuries from Spain, Persia (Iran) and Isnik in Turkey. [27/03/2003]
Vase and cover
Designed by William De Morgan, made at the De Morgan pottery, Sands End, Fulham, England, 1888-1898
Mark: Sands End pottery mark, impressed
Earthenware with lustre decoration

Mrs William De Morgan was the painter Evelyn Pickering. A portrait by her of her husband, painted in 1909, shows him holding this vase and cover [23/05/2008] 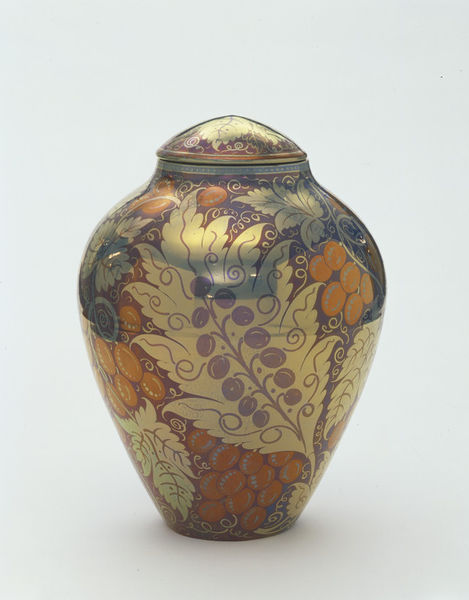