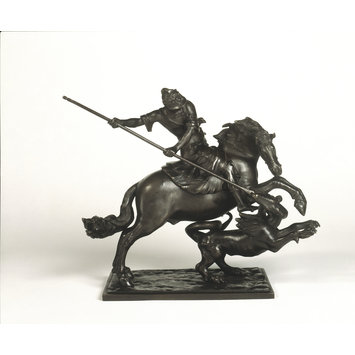 St George and the Dragon

Object Type
In the late 16th century, the Florentine sculptor Giovanni Bologna (1529-1608, active in Florence) and his followers were responsible for a significant output of sophisticated and high quality statuettes. These became dispersed throughout Europe and Charles I inherited a group from his elder brother, Henry, who died in 1612. They doubtless influenced both the King's taste and the imaginative production of Francesco Fanelli.

Materials & Making
Bronze is an alloy of copper and tin, though its exact content can vary. Fanelli's 'bronzes' actually appear to be brass, which is a copper-zinc alloy, with a dark lacquer applied to the surface.

Ownership & Use
Similar bronzes of equestrian subjects were produced by Fanelli for John Holles, the Earl (and later Duke) of Newcastle, governor of the future Charles II. A version of this bronze and a 'Cupid on Horseback' were listed in an inventory of the King's collection at Whitehall Palace in 1639. Both were sold from the royal collection in 1649, after Charles I's execution, but were traced by an agent of Charles II following the restoration of the monarchy. They are now at Windsor Castle.

This group represents St George on horseback in armour, holding a lance with both hands, being in the process of pushing the lance into the open mouth of the dragon. Both the horse's front legs as well as the dragon's front legs are lifted from the ground.

Historical significance: A version of this model was in the 1640s to be found, along with the Birdcatcher and Cupid on horseback shown here, in the Cabinet Room at Whitehall Palace. Similar bronzes of equestrian subjects were produced by Fanelli for the Earl (later Duke) of Newcastle, Governor of the future Charles II.

Statuette, bronze, of St George and the Dragon, by Francesco Fanelli, London, ca. 1640

Records show that small bronzes like these stood on the windowsills of important rooms in Whitehall Palace. Charles I admired Italian statuettes, having inherited an important group from his elder brother, Prince Henry (1594-1612). He went on to buy the famous Gonzaga collection of antique sculpture for £10,000. [27/03/2003] 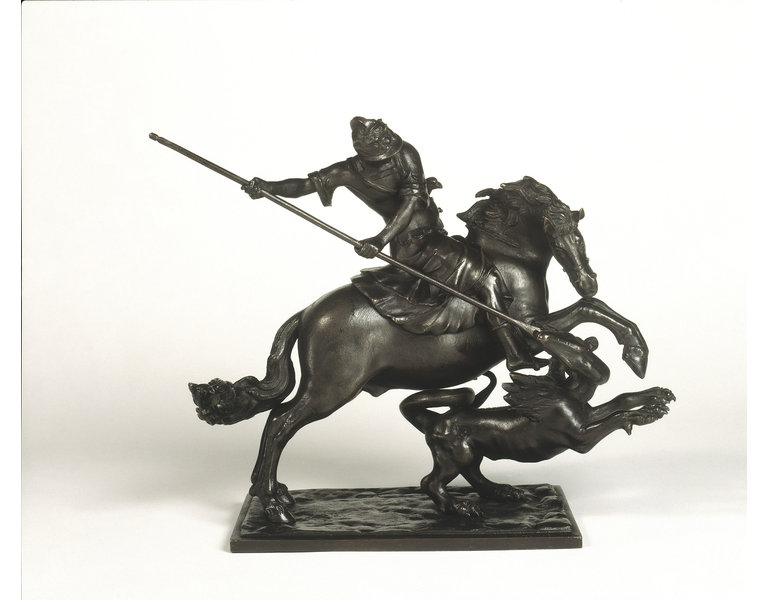