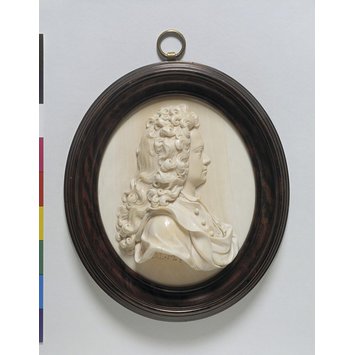 Object Type
This ivory portrait relief of John Churchill was probably sculpted after he had been created 1st Duke of Marlborough in 1704. The exact occasion for the piece is not however known. Such ivory portraits were fashionable in the early 18th century. This profile form reflects medals cast in bronze, though its larger size indicates that it was also meant to resemble a marble bust.

People
David Le Marchand (1674-1726) was famed for his ivory carvings, particularly his portraits. He was a native of Dieppe, France, and came from a Huguenot, or Protestant, family. With the Revocation of the Edict of Nantes in 1685, and the consequent persecution of non-Catholics, he had to flee France. He was next recorded in Edinburgh in 1696, where he is documented as receiving official permission to open a shop and take on apprentices. He was in London by 1700, when he started to achieve a reputation for his portraits. Despite his wide circle of important patrons and his evident success, Le Marchand apparently died in poverty, though the exact reasons for this are unknown.

Materials & Making
Ivory was a precious commodity, and had been highly valued since ancient times as a material for sculpture. Dieppe, Le Marchand's native city, had a thriving ivory carving industry, which was to continue well into the 19th century. The ivory used by Le Marchand must have been imported from Africa, where a profitable trade of slaves and ivory was being conducted. Sir Humphrey Morice, a friend of one of Le Marchand's patrons, was directly involved in this trade and may well have supplied him with ivory.

An oval bust portrait in high relief. The subject faces right; he wears a draped cloak over his open shirt and jacket; £ buttons of the jacket visible. Monogrammed. Mounted on a later wood frame.

Ivory in later wood frame, with brass ring for suspension

British Galleries:
The Duke of Marlborough (1650-1722) may have commissioned this carving as a family memento. He was a successful soldier and after his military triumphs in 1703 and 1704 he began to be portrayed as a hero, in popular prints, songs and on decorative objects. [27/03/2003] 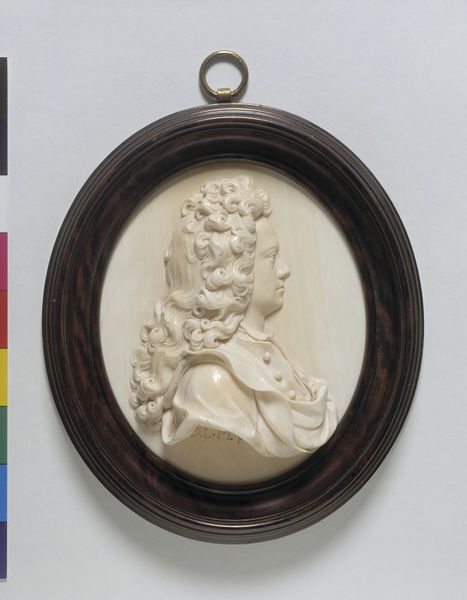