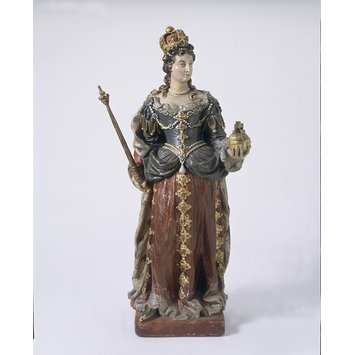 Object Type
The Queen is shown holding an orb and sceptre and looking towards her left. She wears a crown and bejewelled dress. The statue for which this was a model has since been lost, following the fire at the Exchange of 1838.

People
John Nost was a native of Malines in The Netherlands. He is first recorded in England around 1678, working at Windsor Castle under Hugh May. His workshop was in the Haymarket and he specialised in lead figures, though he also worked in other materials, such as stone and terracotta. He had many important patrons and was commissioned to make a number of garden figures for great houses and palaces, including Castle Howard and Hampton Court Palace.

Materials & Making
Terracotta (baked clay) was commonly used for sculptors' models. The clay could be modelled freely before firing, and when fired was a durable material which could be painted or scaled up into a larger piece. Often, as must have happened with this piece, the terracotta model was valued on its own account.

Statuette, painted terracotta. The Queen in coronation robes stands with right foot forward on a dark red block. She hols a sceptre in her right hand and an orb in her left. Her crown is somewhat uncomfortably far back on the head. She weas a dark blue robe over a dark red petticoat edges with lace and adorned with three vertical rows of gold and jewelled quatrefoils. The bodice is embroidered with pearls and other jewels and the quatrefoil design on the petticoat is continued on the bodice which is edged with lace at cuff and throat. The sleeves are enriched with lapets below the shoulder. She wears a tight pearl necklace and her hair is ornamented with pearls. A heavy red cloak, lined with ermine, hangs from the shoulders and is looped over the right arm.

Terracotta, modelled and painted and gilt

Possibly modelled by John van Nost (possibly born in Mechelen, The Netherlands, active in England from about 1678, died in London, about 1712).
Previously owned by the donor's mother, Lady Younghusband. The donor 'understood from her [mother] that is was one of the statues of Kings and Queens of England which stood in Gloucester Cathedral, until they were removed many years ago'. Given by Miss Eileen L. Younghusband, Holland Park, London, in 1946.

These were models for life-size figures that were erected in 1695 on the Royal Exchange in London. They were from a series of sculptures depicting English monarchs. Statues were a traditional and powerful way of ensuring that the images of monarchs were widely known to their subjects. [27/03/2003] 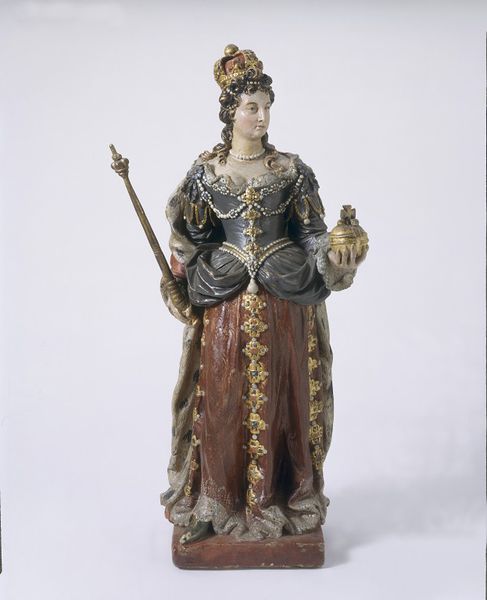